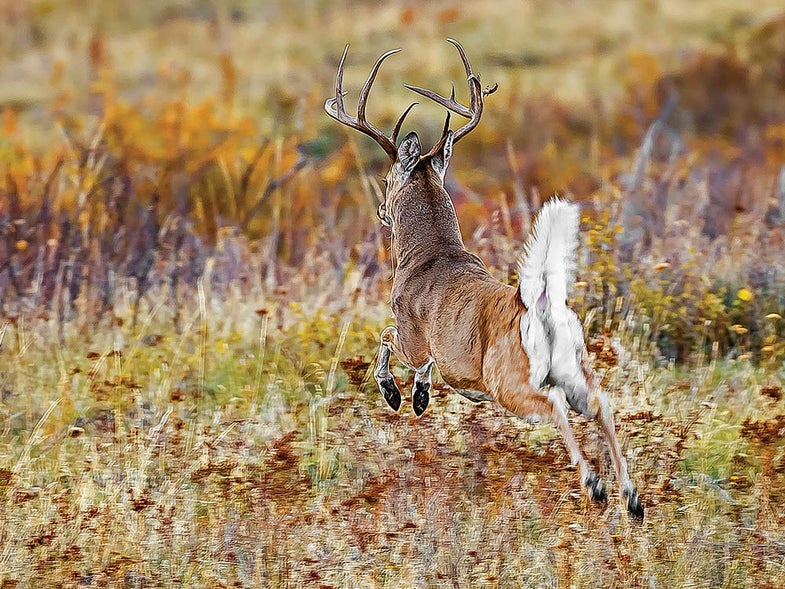 It seemed more like an eruption of dried brush and leaves than the classic flight path of a fleeing buck. I’d blown it big time, and by the time I’d regained my wits, the big 8-point had jumped a creek and was zigzagging his way up a wooded hillside before disappearing into a thick stand of hemlocks. The unmistakable noise of his wide rack snapping dead branches suddenly stopped, however, as if the buck had either broken into an opening or had stopped dead. But I knew that there were no openings.

I immediately dropped to my knees and slowly brought my binocular up to my face. The buck had indeed stopped behind a fallen tree and was staring at his backtrack. He remained still as a statue for several minutes, then looked left to right momentarily, giving me just enough time to put a .30/06 round through his chest.

What I learned that morning convinced me that spooking a buck does not necessarily mean game over. In fact, in some cases it means the game has really only just begun. You can pull out all the stops.

Besides, what have you got to lose?

Bucks are fairly predictable in late summer and early autumn. Spook a buck early in the season, however, and you risk pushing him onto a neighboring farm for the rest of the season or causing him to go nocturnal. So what should you do?

Begin by carefully reading his body language. If he makes a few short bounds only to stop within sight behind a blowdown, he probably does not know exactly what scared him. Drop to your knees and wait him out. You could get a second chance.

If the buck seems quite nervous and high-steps away with his tail erect, try to make him think that you’re a fawn. Instinct tells bucks that fawns can be rambunctious. Don’t move a muscle, but bleat at him a few times to calm him down.

In those cases where the buck bolts as if his life is in mortal danger, the jig may be up. Follow him with your eyes and ears for as long as possible to learn his escape route. File it away for future reference. If you jump a buck while getting to your treestand or ground blind before first light, adjust your location. Move your stand closer to his suspected bedding site or to a more protected feeding area, such as an overgrown orchard or a small oak grove.

As the rut is about to break loose, the risks and rewards of spooking a buck—or multiple bucks—climbs. There have been many occasions when I’ve found myself amid a pack of bucks in hot pursuit of a single doe nearing estrus. If you mess up, don’t despair. The ability to regain contact with the buck has actually never been better.

A rutting buck that is scared off an estrous doe will be tenacious about picking up her scent up again. He’s likely to circle about, periodically dropping his nose to the ground to catch her trail. Hang tight for 30 minutes or so to let things settle down before making a move, whether you decide to head off in the direction he fled or circle around him.

Give the buck what he is looking for. Try some vocalizations such as an estrous doe bleat, or a series of estrous bleats followed by a series of moderately toned tending buck grunts. He will hopefully interpret your renditions as that of a doe being seriously courted by another buck. Stomp the ground and shake some brush or even snap a nearby dead branch to add realism to the ruse. Light antler rattling can also work.

Break out the scents. Attach an estrous-scented drag rag to your boots and keep a can of aerosol scent in your pocket. As you move along, occasionally spray the estrous scent, keeping a careful eye downwind as well as ahead of you.

When the rut is at its peak, it’s common to jump a buck that is bedded with an estrous doe. Here’s when taking a tip from the fall turkey hunting handbook can pay dividends. If it’s possible to somehow influence the escape route of the running deer, try to split them off in different directions. I’m not advocating a hard chase through the woods by any means, but sometimes a few quick steps one way or the other can help bust the deer. Resist your impulse to give chase.

Stay put behind a blowdown that affords a good 360-degree view. The buck will leave the immediate area for 10 to 30 minutes, but he will eventually return to where he last saw the doe. Wait in ambush downwind from where you last saw her. Your chances of getting a shot at that buck are actually quite good.

If you’ve got a portable doe silhouette, use it. A returning buck will be expecting to see a doe.