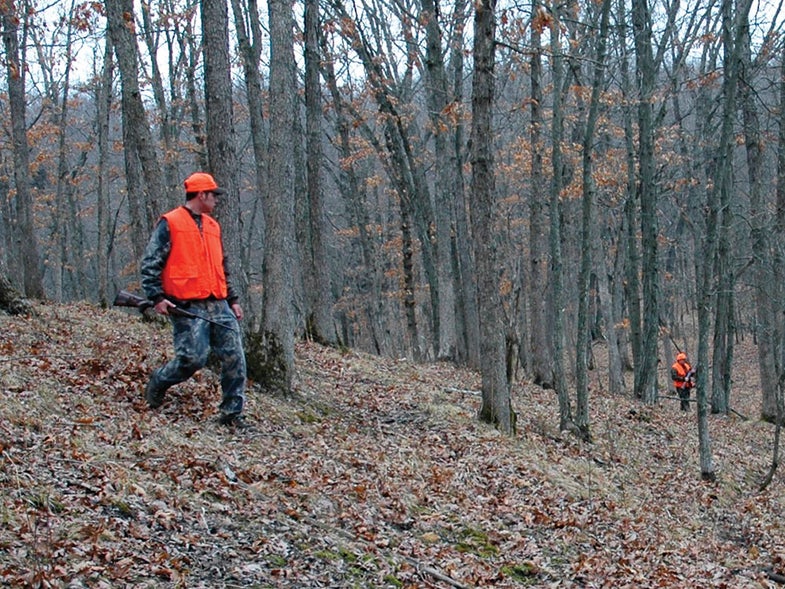 A pair of hunters at the start of a side-by-side timber deer drive. John Hafner
SHARE

Drives are a proven way to get deer up and moving, especially later in the season when they’ve gone nocturnal. Assembling a platoon of buddies and orchestrating a big drive can be more work than fun, though. There’s a better, more efficient way that involves just you and a trusted buddy—and it’s not effective only late in the season. In the right situations, the two of you can punch all the tags you want by making a few well-planned drives.

It’s just about impossible to drive deer with only one other hunter, but you aren’t really driving them as much as you are encouraging them to move in the right direction. Call it a soft push. The last thing you want to do is spook deer. Some will run, but many will stay in cover and slink ahead of the walker right into the crosshairs of your partner if you do it right.

There’s no better place to make a two-man push than on a farm with isolated blocks of timber, a wooded riverbottom flanked by open ground, or on rolling land with lots of brushy draws and other linear bedding cover. Geographical features like rivers, bluffs, and other barriers can help steer unsuspecting bucks right into your partner’s lap.

The tactics are simple, but success depends on a few basic rules. First, the stander must sneak into position without being seen or winded. That means the driver will be moving through the woods with the wind at his back. That’s okay. Your scent is often enough to get a buck on his feet. If you quietly ease through the woods upwind of likely bedding areas, whitetails are much more likely to sneak off rather than run out the other end. Most will be gone before you get close, but some will stand up for a quick look before they flee. Be ready at all times.

Two-man drives don’t always work, because it’s impossible to cover all the escape routes with just one stander. Some deer will run like heck and never offer an ethical shot. Others will break the rules and bolt across an open field. A few seem to find overlooked escape routes. That’s just part of the challenge.

Do two-man drives on the same farm for a couple of seasons, though, and you’ll eventually learn just how predictable whitetails can be. They frequently use the same escape routes time after time, even if it’s a different generation of deer. You can adjust your next drives based on experience by approaching known bedding areas from the most productive angles and steer whitetails right to your friend.

Posting a stander on one end of a block of woods or along a riverbottom works great when the cover is suitable, but it’s not such a good tactic when you hunt an endless forest. That’s when both of you need to walk. By paralleling each other as you move through the woods 100 to 300 yards apart, one of you will often have a bumped deer run smack into you.

It’s important to stay out of sight of each other (see Safety First, below). Available cover and terrain will dictate the best distance, but make sure bumped deer don’t know there are two people in the woods. Instead of running from both of you, they will sometimes run toward one of you, then slow or stop, and offer a quick shot.

Use wind, cover, and terrain to your advantage, but make sure you both walk at the same slow pace. The slower you go, the less likely deer will run at full speed. Walk a few yards, stop and look ahead, and then repeat.

Read Next: How to Run a River-Bottom Deer Drive

Whether it’s a soft push or a calculated two-man walk, it’s vital to make a plan, set rules, follow them, and always wear hunter orange. If you aren’t intimately familiar with the property, pull up an aerial map on your phone and discuss where each hunter will be. The stander should never leave his designated post, and the driver should specify and stick to his route. Neither hunter should take a shot at a deer that might be between him and his partner. Wait until it gets well off to the side or beyond, or at least has solid ground behind it. A hill is good; trees or thick brush aren’t.

If you aren’t 100 percent certain, don’t shoot. It’s just a deer. Besides, if that spot held a deer once, there’s a good chance that the same buck or another will bed there on a different day. Give the area a week to settle down, grab your buddy, and walk it again. Punched tag or not, driving beats staring at an empty food plot.