Why You Probably Overestimate a Buck’s Score, and How to Fix It 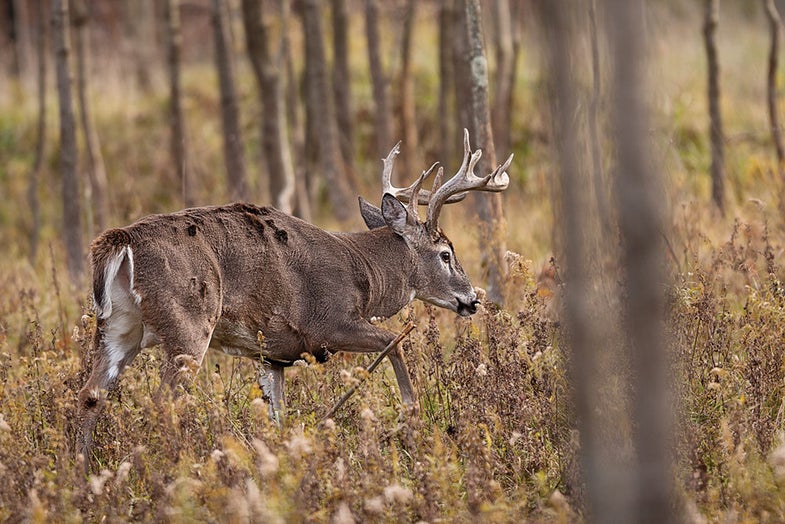 Rack size can be difficult to judge when viewed from behind or if a buck is quartering away. Lance Krueger
SHARE

A picture may be worth a thousand words, but for deer hunters, it can be worth a few more scorable inches. Need proof? Post a trail camera photo of a buck on a social media site and ask fellow hunters to score it. You might get one or two accurate estimates. The rest? Not even close—and you can bet that most will be on the high side. Bucks that are real-world 110-inchers suddenly become 120s. And borderline 140s turn into B&C bucks.

Why are so many hunters so bad at judging a buck’s score?

“Few people actually put a tape to a deer,” says Boone and Crockett’s director of big-game records, Justin Spring. “They might ask a guy who seems to know what he’s talking about, and when that guy gives a number, they just assume he’s right, even though he may not be close. You have to look at a lot of bucks and actually confirm the score to accurately estimate another buck’s score from a photo.”

Kansas outfitter Gene Pearcy agrees. He monitors 20 or more trail cameras every year and looks at as many as 200 different bucks per season. Lots of them top 130 inches. Few hunters see a buck that big more than once or twice a season, so when a decent buck mugs for their camera, they tend to assume it’s much larger than it really is.

Experience is one thing, but Facebook photos or even buck-in-hand estimates are almost always high. Nobody guesses low. Spring says there might be some psychological factors in those generous scores. “It just seems like people want deer to be bigger than they really are,” he says.

Misjudging a buck from an image is understandable to a point. Trail cameras present a unique set of variables, not the least of which is timing. Around mid-August, for instance, Facebook pages swell with photos of bucks gathered around a corn pile or a feeder. They all look a bit heavier, thanks to a layer of velvet, which adds mass and even a bit of length to the antlers. Hard antlers can be deceiving, too. Odd angles, varying distances from the camera, and poor-quality photos can distort them.

So how can you accurately judge a score from a trail camera photo? It helps to look at a lot of before-and-after bucks. In other words, capture them on camera and then actually score them once they are wearing your tag. Try to score them all—both big and small. The Boone and Crockett Club has a handy and simple scoring calculator on its website. Do it often enough, and you’ll be able to get pretty close when you estimate a photo.

Pearcy starts by looking at a buck’s main beam as it compares to the length of his nose. The average length of a really good buck’s main beam is about 20 inches—maybe 22. It’s about 8 inches from the center of its eye to the tip of its nose. No side view? A buck’s ear is about 7 inches long. Use that as a general guide. Also, consider the distance between the tines and each one’s individual length to help you get an idea of total length. To gauge spread, figure 15 inches between a young buck’s ear tips, and 17 for a large, mature animal. Scores are calculated with the maximum inside spread of the main beams.

“Mass helps, but there isn’t a whole lot of difference between a 125-inch deer and a 200 when it comes to how much mass factors into the total score. Unless the antlers are exceptionally thin or really heavy, you will only be off by 6 or 8 inches if you misjudge the circumference by a half inch. The average circumference of a mature buck’s main beam is 4 to 4 ½ inches,” says Pearcy.

Read Next: How to Preserve Velvet Antlers

Every inch counts, of course, but nothing can boost a score faster than the length of the main beam, and the number of tines and their lengths. Good brow tines can add more inches to the total score than you might think.

“The average buck will have 2- or 3-inch eye guards, so if you are looking at a buck with 6-inch brow tines, that’s an extra 6 or 8 inches right there,” he says.

The G3s and G4s can also add quite a bit, assuming a buck has those fourth tines. The difference between a good 8-point and a 10 can be a dozen or more inches.

Still not sure? Post the buck’s photo on a social media site. Figure the average of all the guesses and subtract 10 percent. That might get you close to the actual score. Shave off another 10 percent, and you’ll probably be right on the money. Better yet, spend some time making careful calculations. The more you do it, the more accurate you will be.