How to Decode a Black Bear’s Body Language 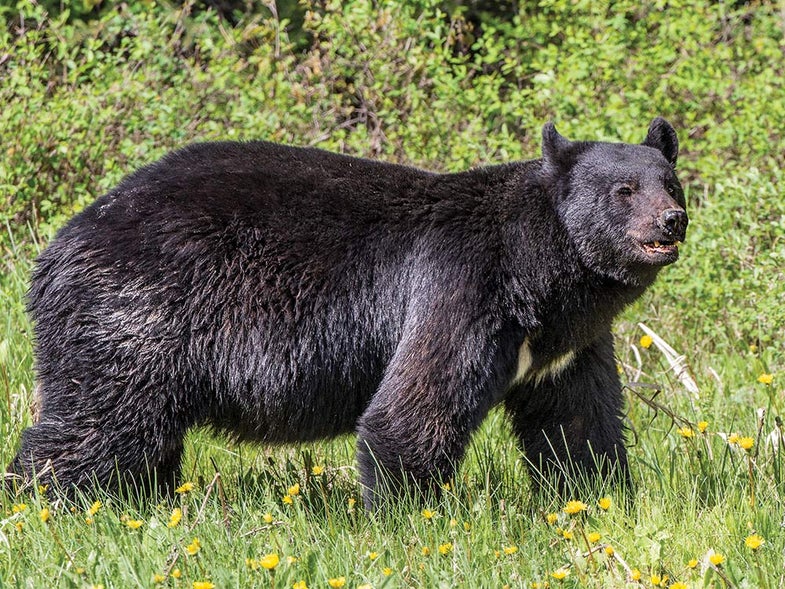 The big boar pulled his head out of a garbage can and turned to face me. I had blundered into his personal space, and I knew that I was in trouble. His legs stiffened, his head began to swing side to side, and he popped his jaw. I took the hint, backed away, and let him go on his merry way.

In my 36 years as a West Virginia conservation officer, I’ve watched black bears do some crazy and downright scary things. I’ve also learned that a black bear’s posture can transmit its mood and intentions. Understanding a bear’s body language and vocalizations can help you decide your next move, whether you are hunting them or simply trying to avoid a confrontation.

A curious, non-defensive bear will circle downwind to catch your scent or that of another bear. It will typically open and close its mouth like a scent-checking bird dog, and may also stand on its hind legs to gain a higher vantage point. Its ears will be forward, and it may pace nervously in a circle. If you’re at a bait site and witness this behavior, it’s a sign the bear has seen or smelled you or that there’s another bear in the vicinity.

Once its curiosity has been satisfied, this bear will often bolt with a loud whoosh of exhaled air. This sound seems to be made when the bear is afraid. If you surprise a bear at close range and it makes this noise while it’s leaving, you’ll both get a shot of adrenaline. A bear that has been spooked in a spot-and-stalk may also make this sound as it departs.

This bear is protecting either its cubs or a food source, or it has been surprised at close range. Although many bear experts believe that black bears with cubs are not overly dangerous (entirely different from grizzlies), don’t press your luck.

A defensive bear may start to salivate, yawn, stomp, swat the ground, sway its head, pop its jaw, or huff. Some researchers believe that bears huff when tension eases, just as a person would draw a large breath after a fright.

Jaw popping, or clacking, can be quite loud and is thought to be a sign of fear. Some experts claim that clacking bears won’t attack, but I never write any bear rules in stone. Whether it’s feeding at a bait site or on a white oak flat, a bear that exhibits defensive behavior may be reacting to another bear approaching or to you. A bear that is reacting to you will generally leave of its own accord. If a bear you are watching acts this way, know that he will not stick around for long.

The mock or bluff charge is also the move of a defensive bear. This charge is often accompanied by a short woof and a quick lunge toward you. This may be repeated several times. In a bluff charge, the bear’s ears are usually erect and its muzzle is pointed toward you. Bluff charges almost never result in actual contact.

Linda Powell, director of media relations at O.F. Mossberg & Sons, has hunted bears for 20 years in both the U.S. and Canada. While filming a hunt a few years ago, she got a ringside seat to some defensive-bear body language.

“It was a sow with cubs, and she was focused on an approaching shadow in the brush,” says Powell.

The sow immediately took a defensive stance, standing on all fours with shoulders raised, and at the same time vocalized to the cubs. The two little ones quickly bolted to the nearest tree and hastily began their climb to the top.

“The next sound I heard was one that I’ll never forget,” Powell says. “The sow made repeated, high-pitched grunts, coming from deep within, as she rose up to fight. The fur on her neck and shoulders was erect—as was the hair on my neck. The approaching bear took a similar stance but was soon on all fours running away from the sow. This scene was replayed several times before the advancing bear decided to walk away in defeat.”

Read Next: Tips and Tactics: How to Hunt Black Bears

A predatory bear is the most sinister of all. Its behavior differs from that of others previously mentioned. This bear is stalking you as prey. Predatory black bears are almost always a large male. He may follow you for some distance and circle or zigzag toward you. The bear will show no signs of stress, and will appear intently focused on you. If you’re hunting bears and see this sort of body language, it’s time to shoot. If you’re not, back out while closely watching the bear, if you can. If you are in a group, come together to appear larger to the bear. If the attack comes, use your bear deterrent. Do not run. That’s a race you won’t win.