Deer of the Year 2017: A Gnarly Non-Typical Ohio Buck 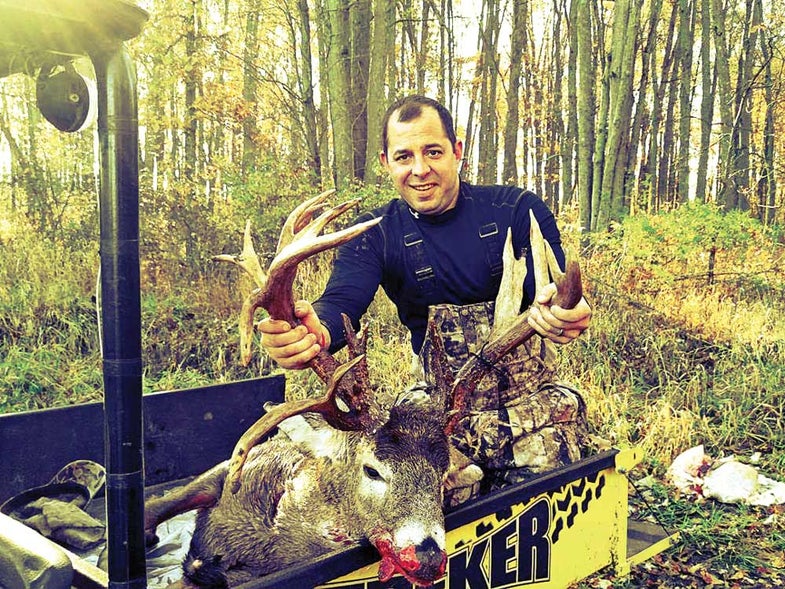 Noel Underwood’s funeral was on November 4. More than just a neighbor and friend, Noel was my mentor in hunting and in life. During those last few days, my son Nash and I would sit with Noel, eat a few fudge pops at his bedside, and talk about the buck. Although Noel’s condition was deteriorating and he would often get confused, he was clear about one fact: that I would some day kill the biggest buck in Union County, Ohio.

To call the buck to which he was referring “huge” is an understatement. After seeing the first trail camera photo of the monster non-typical on August 19, I immediately began collecting my thoughts on how I could possibly take him. The piece I was hunting was about 240 acres; however, much of it was in fields with just a bit of woods and fencerows poking out to the interstate. I guess if you were a buck hell-bent on holing up in pocket cover, it would be ideal. For a guy trying to hunt it—well, that’s a different story.

I deployed several cameras with the hope of patterning the big non-typical, but it wasn’t until September that I actually got to see the deer in person—from about 300 yards away. I repositioned my cameras and was finally able to pick him up again. I jokingly told my wife that for the next few months, she would be single and my kids would be fatherless.

That was the beginning of my 38-straight-day quest—in the woods before first light, some work during the day, and back at it for the evening hunt. I never hunted below 20 feet with my climber, and I changed locations every couple of days.

After Noel’s funeral, friends and family gathered at the local Elks Lodge to celebrate his life. I’d invited a buddy to hunt with me the next morning, but after the late night, I couldn’t answer the bell for the 4:45 wake-up call. I texted him a map of where to hunt, told him where to find my four-wheeler, and planned to take the morning off. Whether it was my buddy’s cajoling texts or thoughts of Noel, I’m not sure, but I grabbed a box of cookies, a soda, and some aspirin and headed for the woods—a bit late, but there nonetheless.

Shortly after getting situated, I could hear movement in the brush—here he came. I ranged the buck at 55 yards and he kept moving closer. I practice from 10 to 50 yards every day and was confident that he was in range. Once I found an opening, I let fly. His legs stiffened when the arrow hit, and he crashed through the brush toward me. I stuck another arrow in my bow and hit him perfectly. He dropped. It really wasn’t until that second shot that I knew for sure that it was the buck that I had been chasing all season.

Amazingly, though no one mentioned ever having seen the deer, when news spread about my huge buck, hunters came out of the woodwork to share their pictures of the monster buck. He was officially scored at 234 5/8. Somehow, Noel knew all along.