4 Tips for Trapping Foxes and Coyotes

The post-hunting season blues can get the best of any of us, and here in Alaska, trapping is my favorite... 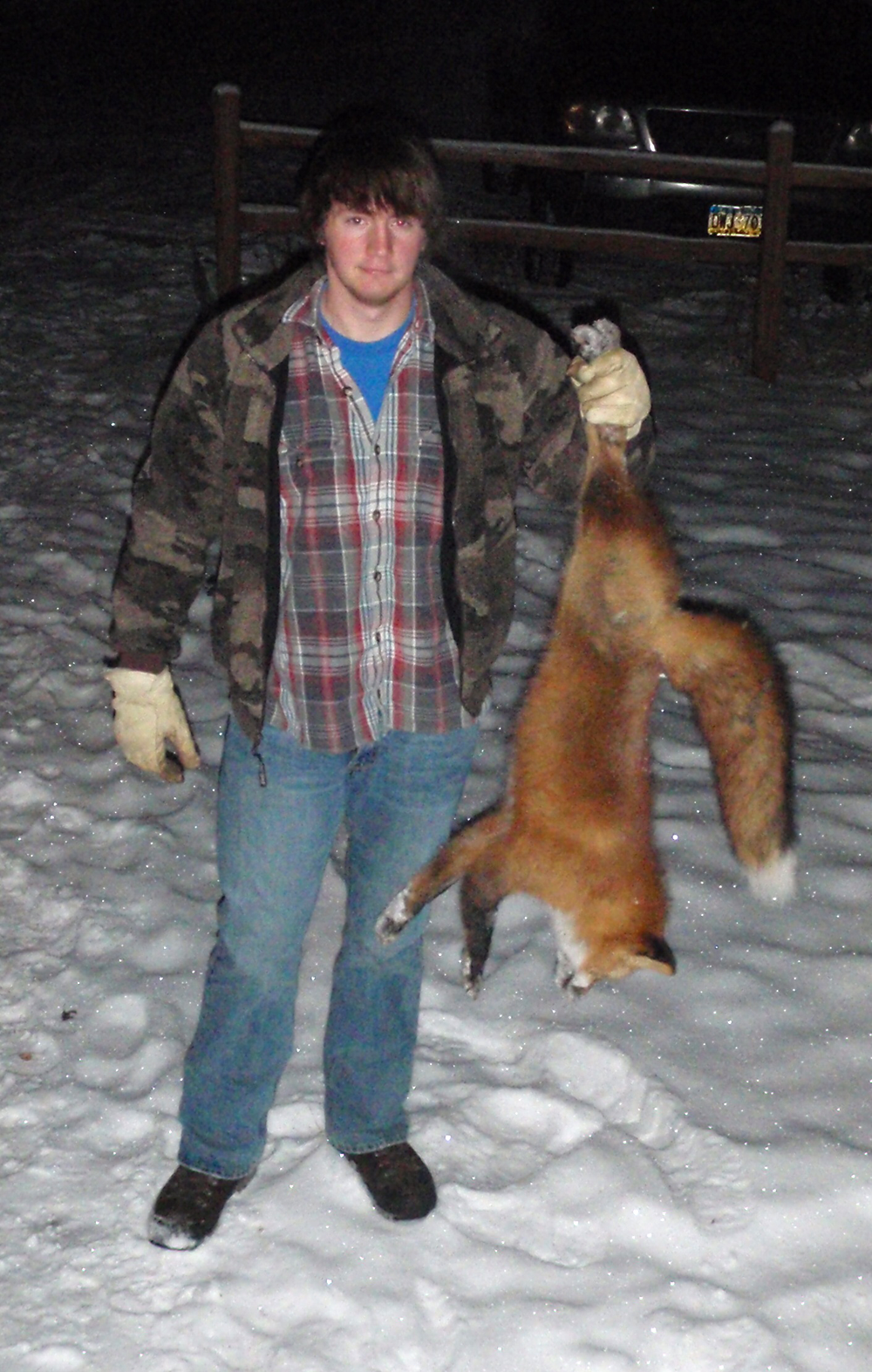 The post-hunting season blues can get the best of any of us, and here in Alaska, trapping is my favorite way to beat them into submission. If you aren’t doing it already, you’ll find that it will turn winter from a dreaded down-season into something you look forward to every year. Whether you are a seasoned trapper or just starting out, there are always things to learn. Trapping is a game of wits, and every trapper has his or her tricks to outsmart the wiliest critters. I’ve learned a few over the years, and here are a few tips to get you pointed in the right direction.

For fox, my favorite trap is probably the #2 Montgomery dogless coilspring. They lie very flat and are easy to hide, but they have a pretty forgiving jaw spread. I also like the Duke # 1 ¾ coilspring traps, but any in the #1 1/2-#2 size range will work and won’t damage the skin. Although they will typically hold coyotes, I’d recommend traps in the #3-#4 size range if you’re actually targeting them.

Whatever the gear you choose to use, the single biggest key in catching fox and coyotes is scent. There are plenty of boiling and degreasing methods out there, but you want to make sure that your traps are oil-free and have been boiled and kept clean to avoid any human scent. You also want scent-free gloves. In our climate, the heavy duty cotton gloves you can find at the hardware store work great, I just carry extra pairs and change them when they get wet or touch bait.

The best areas to make these sets are the travel and hunting routes of foxes and coyotes. Tracks are your best indicator, and often you will find them moving through or along thin strips of brush or timber alongside fields, lakes, ponds, and streams. In thicker woods, the animals frequent ATV and game trails. Foxes especially like areas with people around. Agricultural areas are great, and where legal, wooded or brushy areas on the outskirts of towns or subdivisions can be loaded with fur. It should be noted that some of these areas also have a lot of dogs running around, and you want to do all you can to avoid catching them. Even though in many places (like here in the Fairbanks Borough) it’s explicitly illegal for people to let their dog run off of the leash, they often do it, and you will be the “bad guy” if you catch them. Learn to distinguish fox, coyote, and dog tracks, and try to avoid areas with lots of dogs. 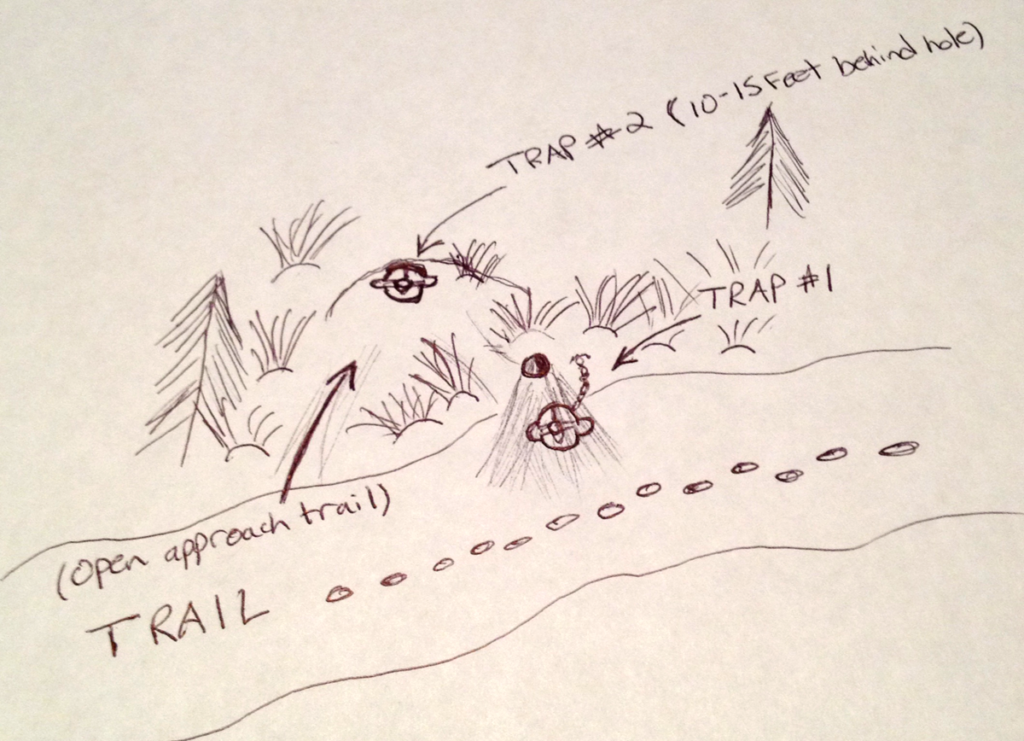 The best areas to make these sets are the travel and hunting routes of foxes and coyotes.

My favorite fox set is the classic dirt hole. I set them on the edge of my snowmachine or snowshoe trail so that the trap will be set on the very edge of the trail (often a fox or coyote will not want to step off of the trail to investigate a set, but will step on the very edge). I dig a 2 inch (or so) diameter hole underneath a bush or clump of grass that acts as backing and gives the animal only one good way to approach the set. The dirt hole mimics the habit of canines digging for and stashing food for later, and other fox or coyotes will often check them out. After digging the hole and anchoring the trap, I set it 8” or so back from the hole, and set just to the right or left of center to catch a front foot. Here in interior Alaska, we use snow to conceal the trap, but that doesn’t work everywhere, so research what is commonly used in your area. After concealing the trap, I load the hole up with bait and sometimes a dab of lure.

After observing quite a few foxes and coyotes not fall for the gag, I started making an addition to the set where appropriate. If you can pick a spot for your dirt hole with a small mound or stump 10-15 feet behind your set with a clear avenue of approach from the trail, concealing a “blind” trap with no bait on top of that high spot can nab the smart ones. It can also get you the occasional double, as often a second fox or coyote will circle the caught one. Even the wariest critters seem to always want to mill around and examine the set from a distance, and I’ve caught a number of them that thought they would get on that high spot to look at the dirt hole. You do want to make sure that the traps are set far enough apart so the drag circle from one set will not overlap the other trap.

There are a lot of quality baits and lures out there, and many of them work great. Ask 10 old trappers what the best bait is, and you’ll get 20 different answers. I’ve caught canines on duck carcasses, raccoon lure, soured fat from meat trimmings, animal bones, and fermented herring. The list goes one, but my no. 1 goes to (especially when near civilization) cheap dog food. Both foxes and coyotes love dog food, and when they’re anywhere near people, they often steal it out of food bowls. My favorite trick is to throw a handful in the dirt hole and sprinkle a few kernels on the trail in front of the hole. Usually if they pick up just one piece you will catch them. As an added benefit to “urban” trappers in areas where people let their dogs run wild, dogs don’t seem nearly as attracted to cheap dog food as they are to stinky, more “natural” bait.

Whether you’re a novice trying to skin your first coyote or a seasoned expert, there are always new methods to learn when it comes to fur handling. There are usually several ways to reach the common end goal of a clean, well-groomed skin at maximum potential. But before even considering actual skinning and fleshing methods, there is often one obstacle that needs conquering.

Many furbearers like foxes, coyotes, lynx, and bobcats are sometimes infested with fleas. It’s not the most appealing thing to part the fur and find it crawling with these jumping parasites. And you definitely do not want to get them yourself. I “picked up” a few off of a lynx once. Fortunately, and because I didn’t have any pets, they died off in a few days. Most fleas found on furbearers cannot survive on human blood, but even a couple can still chew you up pretty good, and I had the paranoid itch for quite a while. You want to be careful about how you handle the animals because as soon as they’re dead, the fleas will want to migrate to the closest warm body. And that’s you. So avoid carrying them over your shoulder. Sometimes the animal is so infested that you should consider using a length of rope to drag them instead.

Fleas can turn into a nightmare if you get them, but they’re relatively easy to eliminate before that happens. The best method I’ve found is gassing them. I’ll hang the animal up by a hind leg in the shop and spray it down with Raid flea killer (most insecticide sprays work just fine). Then I pull a large trash bag up over the animal completely, spray some more in the bag, and tie it off with the whole animal inside. After letting it sit for 15 to 20 minutes, most of the fleas will have died. Those that haven’t will be well on their way. Be careful not to inhale the stuff and wash your hands afterwards, but overall it works great and doesn’t harm the fur.

Before bug killer sprays, trappers had to find other methods to purge their hides. The native trappers here in Alaska would use the warm rabbit hide trick. They would bring a lynx inside and lay a warm rabbit skin on the floor next to it. Most of the fleas then crawled from the lynx to the warm hide. After a spell, the trapper tossed the rabbit hide in the wood stove. Freezing for a long period of time will kill fleas, but it takes a long time. I’ve seen fleas that are frozen solid begin crawling all over a lynx as soon as it was brought inside and begin to warm up.

Skinning is a lot easier when you’re not constantly worried about fleas crawling up your arm, or frantically scratching because you thought you felt one creeping down your neck. You (and your family) won’t fully appreciate this extra step unless you actually get fleas, so trust me: It’s worth it.