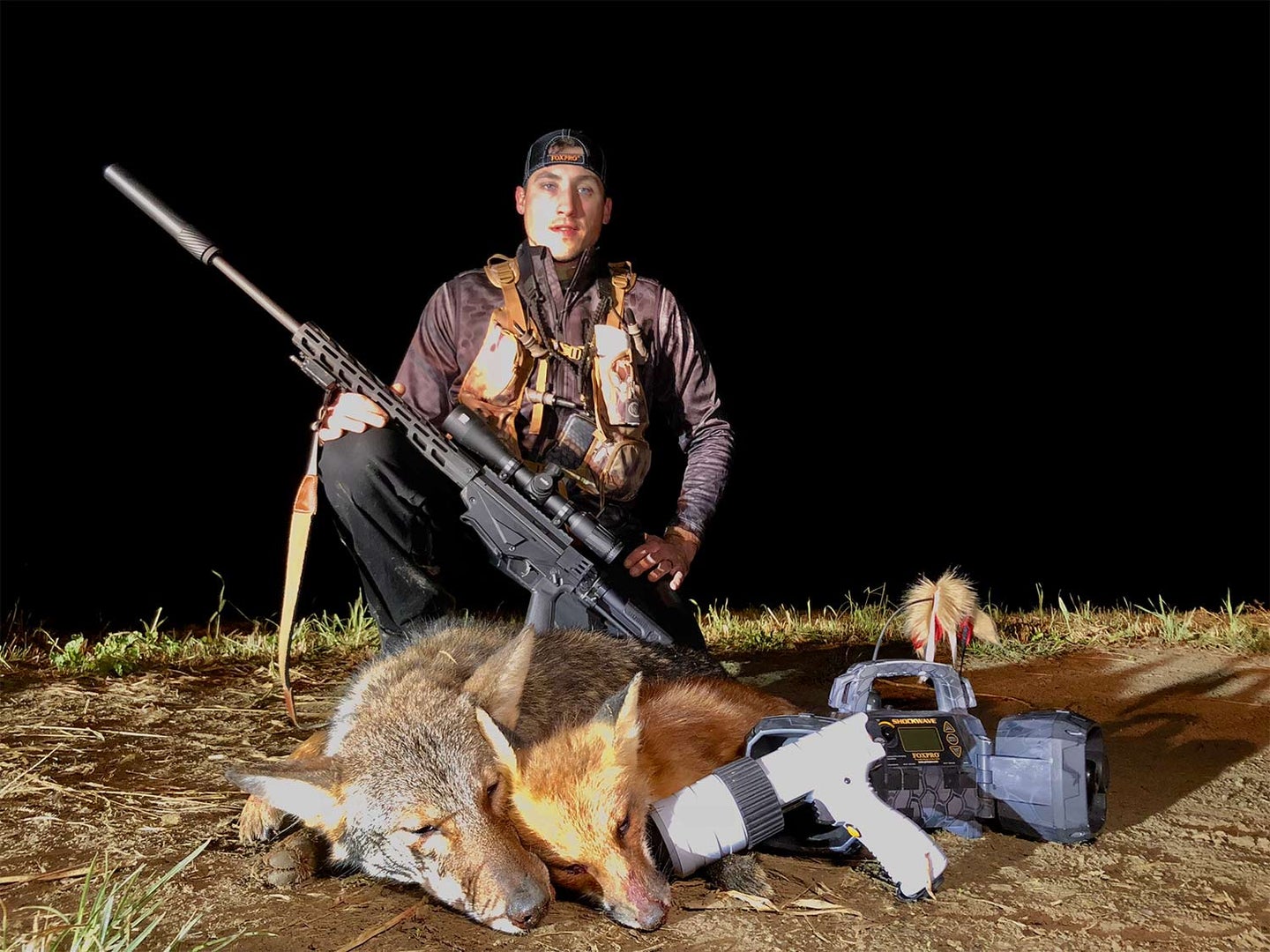 Ducks, geese, deer, turkeys…any critter you can call to, Abner Druckenmiller is obsessed with. But he’s particularly hooked on calling in coyotes and foxes. He works for Foxpro, one of the most creative game call and intensely-focused predator companies in the outdoors. It’s his business to know what does and does not work to lure wily furbearers into shooting range all over the country. He’s in his second decade of calling to predators in the dark.

But night ops take a little more skill—or at the very least, a different approach—than daytime hunts. For hunters, seeing their intended quarry is paramount. You won’t always have that luxury when chasing fox and coyotes under the moonlight. Spotting and shooting predators in the dark are difficult tasks, especially for newbies, though you shouldn’t let that deter you. Varmints are very susceptible to being killed at night because they are more active, so ostensibly there will be more opportunities if you target the right areas. The darkness gives you the advantage; it’s just a matter of setting up properly and knowing the habits of night-walking critters.

Here are some of Druckenmiller’s key tactics to putting more pelts on the fur sled.

Outdoor Life: What’s your gun and cartridge of choice for hunting coyotes and foxes at night?

Abner Druckenmiller: My setup and strategy don’t change a ton whether I’m hunting out West or here in Pennsylvania, during the day or at night. I pretty much use the same rifle and cartridge for red fox, grey fox, coyotes, raccoons, and bobcats, which is a Ruger .204 rifle with a 45-grain soft-tip Hornady bullet (that offering has been discontinued, but factory loads are available in 40-grain). If a coyote hangs up at 200 yards, I feel a lot more confident with that load than a .17 HMR. I mean you can kill a coyote at that yardage with a .17, but it takes careful shot placement.

I always take a shotgun with me, too. Packing it in sucks sometimes, but if you don’t, odds are that’s when a coyote is going to come in too close for the rifle and you’ll need to make a quick shot. Even if it’s a big, wide-open field, where you would never expect a coyote to work in tight—take it with you.

OL: What’s the best strategy for calling predators in close?

AD: I stick with the same calls I typically use from my Foxpro, but I also bring along a hand call. Sometimes the cadence from a hand call can make all the difference in terms of getting a response from a predator. The biggest rule to follow is if they respond to a certain call, keep rolling with it until they stop responding. It’s just like trout fishing. If I catch one on a pheasant tail, I’m going to keep fishing that same fly until it stops working.

OL: What’s the proper way to use a rifle-mounted light when you’re hunting at night?

AD: The first question I always get asked ism “What color light do you use? White, green, or red?” I like red because it’s softer (so it’s less apt to spook a coyote), and I don’t get blinded when I’m using my Foxpro remote. A white light can be so harsh, so if you do use it, I would dim it down. I feel like I can keep that red light dimmer and see farther with it. If you hit a coyote with a white light at 60 yards, it’s going to bug out of there, but it’s good to have one for finding coyotes, so you should buy a light that has all three colors. Test all the colors out and see what works best for you.

And this may seem odd to someone who has never done it, but you always keep that light on no matter what, and scan the field or woods with it quickly. I turn my light on at the truck and don’t turn it off until I get back. You never know if there is a predator lurking around. I’ve caught eyes walking back to the truck and also turning the light onto the spot where I just made my stand before moving onto the next location. If you’re hunting with that light off, you’re not going to kill anything.

OL: You can use a light in combination with a thermal, right?

AB: Yeah, so what I like to do sometimes is scan with the light, and then once I see the eyes of a predator light up, I’ll turn it off. Then I go to the thermal and call that coyote or fox in tight to take the shot. It makes them less skittish, as long as they don’t smell you.

OL: Shooting at night is much different than during the day. It’s harder to see the target through your riflescope. How can hunters better prepare for shots in the dark?

AD: One thing I highly suggest doing is to buy Bright Eyes, which are those reflectors that illuminate when a light shines on them, and stick them on a paper target at the rifle range. This will mimic the eyes of a predator lighting up in the night when you shine your light on them. You also need to practice target acquisition. It’s harder to find an animal in your scope at night, so you need to go out in the dark and get behind your optic and practice on an object that’s the size a coyote or fox.

Predators are small targets. They may look big because of all that fur, but you only have a 4- to 5-inch area to hit in order to kill them. I like to hold my crosshairs in the center of the animal near the top of the shoulder if they are standing broadside. A lot of times predators will walk straight at you coming into the call, but it’s the same concept there. Hold center mass and it will penetrate deep as long as you have the right cartridge.

OL: Do you ever have trouble locating a fox or coyote after you shoot one in the dark?

AD: One of the most difficult things about night hunting is finding your kill after the shot. I set up my rifle on a tripod, and after I shoot, I leave the gun positioned directly where I shot because the light I have mounted to it will be shining right where I shot. Then I get up with my shotgun and use an additional scanning light to locate the coyote or fox in the field.

OL: What are some important things to consider if this is my first time hunting at night?

AD: If you don’t have much experience with night hunting, you should know that it’s possible to call all kinds of animals into your stand. I’ve called domestic dogs into my stand, and let me tell you, a German shepherd looks a lot like a coyote in the dark. Just because you see a set of eyes light up doesn’t mean it’s a legal animal to kill. I can tell the difference between a fox and coyote at night, but that’s after 16 years of hunting predators. I suggest hunting at night when both coyote and fox seasons are in. That will lower the chances that you shoot an animal that you shouldn’t have. And honestly, I like to wait till fox and coyote seasons overlap because I’m an opportunistic hunter and want to shoot any legal animal that comes in. If a fox comes in out of season, that’s kind of a waste. Wait a few more weeks for fox season, and you can kill both.

OL: Is there a difference in the locations you choose at night versus the day?

AD: You can get away with a little bit more at night, but I still use something to breakup my outline—a fencerow, hay bales, etc. One thing I do at night that you could not get away with during the day is to sit in the middle of a field, so I can hunt 360 degrees. But I’ll find some kind of cover, even if it’s just a small bush in a pasture. You still need to have the wind in your face [so predators can’t sniff you out], and get elevated. You don’t need to be in a treestand, but find a hillside instead of sitting in a bottom. Sit in a chair or even stand up. It will allow you to see further, and you won’t miss out on as many coyotes.

If I’m hunting in the woods, I look for openings where I think a coyote or fox might come into and set up. A lot of times these are old logging roads where I can see out to 200 yards. We have also killed many coyotes by hunting in groups. Sometimes I’ll take two or three gunners and spread them out in the woods. Here in Pennsylvania one hunter might only be able to see 100 to 150 yards if we’re in the mountains or timber. A coyote might hang up just outside that range and you will never see him. You increase that to two or three hunters and now you can see 600 to 700 yards. We’ve been really successful this way, typically hunting just before sunrise and as the sun sets.

OL: What’s been your experience in terms of getting access and how should we plan a hunt?

AD: The No. 1 rule to predator hunting is having multiple places to hunt. If you want to be consistently successful, you need to cover a lot of ground and make as many stands as you can. I’ve seen it all. I’ve had some farmers that don’t want coyotes killed because they kill the deer, and they want to control whitetail numbers. But I’ve also had farmers that hate coyotes and foxes and want every single one of them gone. If a farmer grants you access, make sure you are responsive if he or she calls you. That always goes a long way. Also, you can be really successful on public land. What I do is look for public spots and then use onX Hunt to find the best private options around it. That way you hit both and it increases the ground you can hunt.

Also, try and find chicken, turkey, or pig farms. Predators are almost always hanging around these places and most of those farmers have had an issue with a coyote getting into the chicken coop and killing a few birds. It’s a great opportunity to get on a good hunt.