How to Pick One Rifle to Hunt Everything

Is it possible to use one gun to hunt everything from coyotes to African plains game? 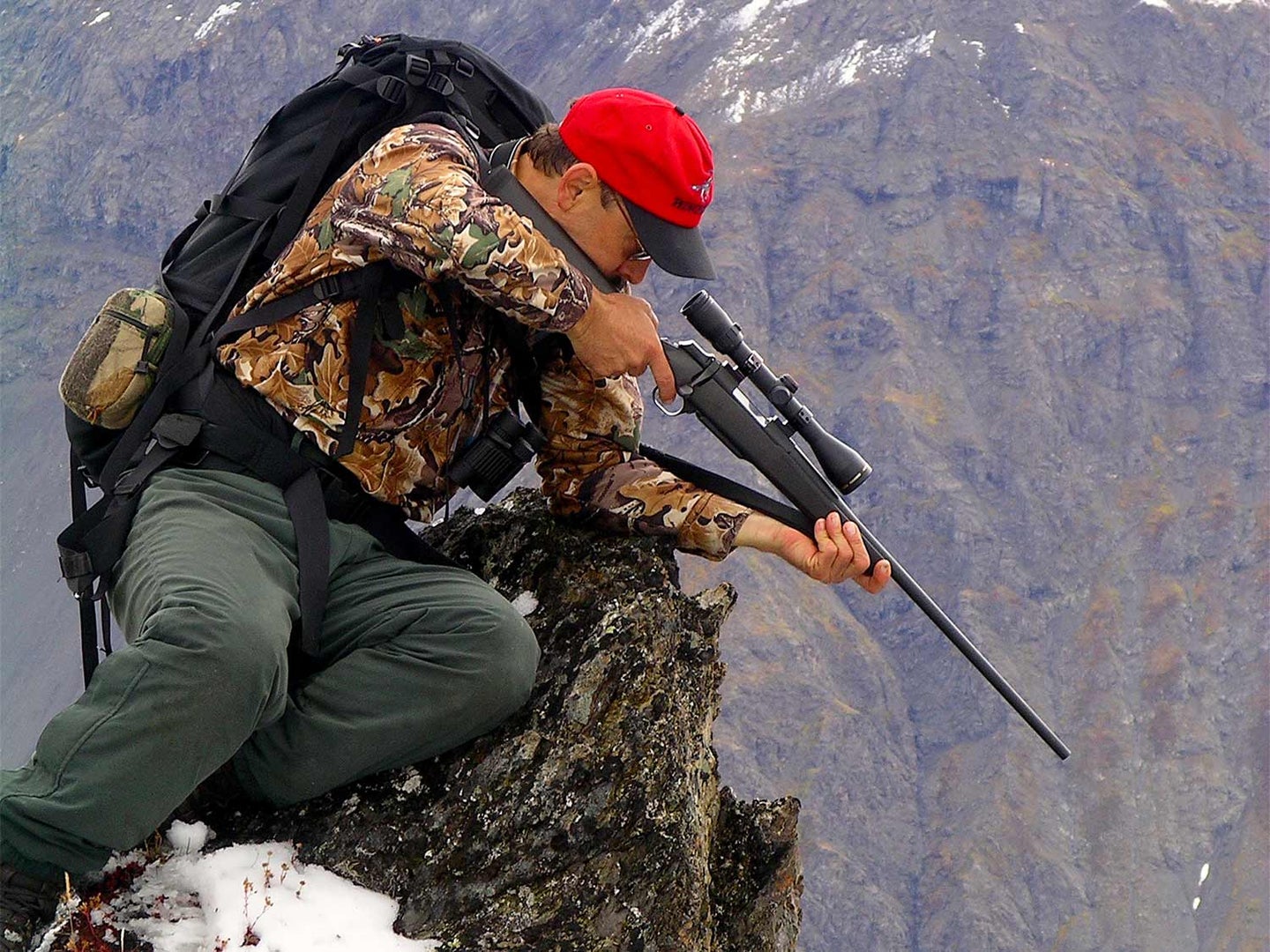 Can you do all your hunting with one gun? Yes, but within limits.

The limits are determined by what you hunt. And at what ranges. The perfect rifle at 100 yards might not be so ideal at 400 yards.

If you want one gun to rule them all, you have to make it a 12-gauge shotgun. Why? Because it can shoot pellets for upland birds, waterfowl, small game, and even—with buckshot—predators and deer. Load that 12-gauge with slugs and you’re ready to tackle any big game short of an elephant. And I wouldn’t bet against the 12-gauge on that, either.

But I don’t think most of us want to be stuck with just a short-range shotgun. What we’re really interested in is one big game rifle to rule them all. You know, the “deer rifle” that is also suitable for taking the odd varmint or coyote yet quite capable of handling elk, moose, bears, and African plains game.

If you want to stop reading and start hunting, get a .300 Winchester Magnum and forget about it. This famous belted magnum, around since 1963, can do it all. But, if you’re curious about recoil, trajectory, energy, price, and similar details that keep hunters arguing, keep reading. Because the .300 Win. Mag. is not the only horse in this race. Equally convincing arguments can be made for many 7mms, .338s, and even .35s.

Up Against Another Limit

We should set another limit because some African countries mandate a minimum cartridge size for hunting buffalo and other dangerous game. Here our cartridge options start with .375 H&H. (Never mind that a famous ivory hunter used a 7mm Mauser.) I don’t know too many pronghorn and whitetail hunters who wish to prowl the prairies and woodlands every fall for 40 seasons with an 11-pound .375 H&H that hits them with 50 foot-pounds of recoil energy at 20 fps.

So let’s take extra large and dangerous game off our list. Now we’re looking for the one cartridge and one rifle we can rely on for all our North American big game hunting. When we’re ready for our African plains game safari, our “deer rifle” will be viable for everything from 10-pound dik-dik to 1,800-pound eland.

Beware the Hunter With One Rifle

Before we dive into calibers, velocities, energies, recoil, etc., let’s acknowledge why we might want one rifle for everything.

Too Much or Too Little?

Shooting precisely is just one aspect of a rifleman’s terminal effectiveness. Ballistics and bullet performance matter, too. You could be fast and deadly accurate with a .30 Carbine, but its 100-grain, .308-inch bullet at 2,000 fps is pretty pathetic. Muzzle energy is only about 900 foot-pounds. That isn’t going to impress many elk. Or even reach many pronghorns. Zero this little .30-caliber at 150 yards and it’s 3 inches high at 100 yards, 8 inches low at 200 yards and nearly 4-feet low a 300 yards! On the bright side, in a sprightly 6-pound rifle, recoil will be just 4 ft-lbs at 6.7 fps. Can you say airsoft?

Obviously we have to strike a balance. As far as reach, trajectory, and killing potential go, it’s smart to err on the side of bigger and better. As they say, there’s no such thing as too dead. (Unless you destroy the meat you came to eat.) As far as comfort, convenience, and smooth handling are concerned, a lighter rifle with less recoil makes sense. A lot of sense. Over the years I’ve seen a lot more hunters lounging around camp because they were worn out from lugging excessively heavy rifles up mountains than from absorbing recoil from excessively light rifles. Then again, more game has been missed due to flinching with a too light a rifle than wrestling the mass of a rifle that’s too heavy.

What we’re looking for is a Goldilocks rifle. Not too big, not too small. Not too heavy, not too light. Not too soft-hitting, not too hard-hitting. We don’t want to short change ourselves when facing that 1,500-pound brown bear at 30 yards, yet we don’t want to miss seeing that bear because a “too heavy” rifle has worn us out. Fortunately, we can modify recoil, trajectory, and terminal performance without changing or modifying our rifle.

Of course it’s the bullets. Those inconspicuous, half-buried little protrusions of metal at the ends of our cartridges can change 2,800 fps to 3,500 fps. They can soften 29 ft-lbs of recoil down to 18 ft-lbs. They can boost muzzle energy from 2,990 ft-lbs to 3,300 ft-lbs. In the same rifle! They can reduce bullet drop at 300 yards from 4 inches to 0 inches. By changing the bullets we shoot, we can optimize our versatile, one rifle to do the work of a half dozen.

You knew this whether you remembered you knew it or not. Many of us have loaded our beloved .270 Winchester, for instance, with 90-grain or 110-grain bullets for coyote hunting. More of us have traded out our 130-grain deer bullets for 150-grain elk loads. Many a brown bear has been tamed by a .270 Win.

The other thing bullets bring to the game are varying degrees of hardness and expansion. Bullets kill by destroying the central nervous system or cardio-pulmonary system. The more tissue the bullet tears, the more hemorrhaging it induces, and the faster the animal expires. While radiating pressure does some tearing, most tissue is elastic enough to stretch and absorb such pressure. More reliable is physical contact, the ripping effect of hard metal against soft tissue. This can be enhanced a number of ways.

Extra frangible bullets break into fragments to radiate outward from the contact point. These can cause massive bleeding and quick demise, but they rarely penetrate far. Controlled expansion bullets are engineered to stay in one piece, expand to varying degrees, and penetrate more deeply. The larger the game, the more likely you’ll need a heavier, controlled expansion bullet to penetrate hide, muscle, and bone and reach vital organs.

So, you choose a light, flat shooting, frangible bullet for coyotes, a medium weight for deer, and a tough, heavyweight for elk, kudu, and bears. Bingo. One-rifle versatility. Now all you have to decide is the cartridge that propels those bullets.

Caliber means the diameter of the bore. A .30-caliber rifle starts with a bore diameter of .30-inch. Rifling grooves are then cut into it to create a groove-to-groove diameter of .308-inch, which is why some .30-caliber cartridges are labeled .308. The bullets they shoot are .308-inch in diameter to fill the grooves and seal gasses. It’s the same with all rifles. The .28-caliber shoots .284” bullets. The .33-caliber handles .338”. The .26-caliber runs .264.”

Bullet diameter changes terminal performance on game because as diameter increases, so does surface area. The more surface area ripping through vital organs, the more the damage, especially hemorrhaging. But because game bullets expand, the degree of that expansion can easily override original diameter. The mass behind those mushroomed noses matters more than the original diameter. The greater the mass, the greater the retained momentum, and the deeper the penetration.

We can dive deep into the weeds on all this, but once you start throwing 175-grain slugs .284 inches and wider, differences in terminal effects tend to blur. So let’s cut to the chase and start mentioning some good prospects for our one-rifle cartridge. The main point is that today’s best bullets make all cartridges/rifles more effective and deadly than they’ve ever been. And they were already good enough to nearly exterminate bison in the 19th century.

The venerable 7mm Rem. Mag. stands smack in the middle of the .28-caliber pack. The .28 Nosler will push a 175-grain 3,200 fps and keep energy above 1,500 ft-lbs clear to 925 yards. Heck, it smashes targets with 3,886 ft-lbs at 25 yards. And those long bullets really penetrate. For smaller game you can step down to a 120-grain and even a 100-grain if you handload. Honestly, any 7mm centerfire from 7mm Mauser on up could be your ideal, one-rifle winner. However…

The .30-calibers remain the U.S. favorite. They’ll do everything a .284 will do, but you’ll need slightly heavier bullets to match sectional density, and slightly more powder to match MV. That means more recoil. You can justify the .308 Winchester as your starting all-around cartridge. Of course, the .30-06 has long been the one-rifle standard. Don’t kid yourself. This old fuddy-duddy can shove a 190-grain spire point 2,700 fps to generate 3,000 ft-lbs at the muzzle and retain more than 1,000 ft-lbs at 850 yards. It, like the 7mm Mauser, has been used to collect every species of big game animal on the planet.

If you want more, there’s the .300 Win. Mag. and a half-dozen others of equal or greater power. The only real difference is slightly more reach or range as maximum velocity increases. The other questions are how much rifle weight you want to carry and how much recoil you want to tolerate. Consider also barrel length. Magnum cartridges do their best with 24- to 26-inch barrels. And some are fitted with 28-inch barrels now. Those are wonderful for maximizing MV, but a pain in the trunk and scabbard, not to mention while ducking through the woods. Most hunters find that 22- to 24-inch barrels on rifles weighing 7 to 9 pounds fully loaded and field-ready are more fun to live with than anything longer or heavier. During four or five decades of hunting, you’re going to be carrying that rifle for many miles and hours. The way it feels and handles matters. A lot.

Unpopular but excellent are the .32-calibers, better known as the 8mms. These shoot .323” bullets in the 180- to 200-grain sizes. Limited ammo and bullet options argue against these, but effective terminal performance argues for them. I could hunt anything anywhere with a 200-grain spitzer in a .325 WSM and never complain. The 8mm Rem. Mag. is the other popular .32-caliber. But, relatively low bullet BCs limit extreme range performance compared to the 7mms and .308s.

Truthfully, with today’s superior, controlled expansion bullets, most 7mms and .308s can do it all. And they come with the greatest options in ammo. I’d have to give the best all-round nod to one of the .300 magnums, but I wouldn’t fault anyone for choosing a 7mm mag or .338 mag.