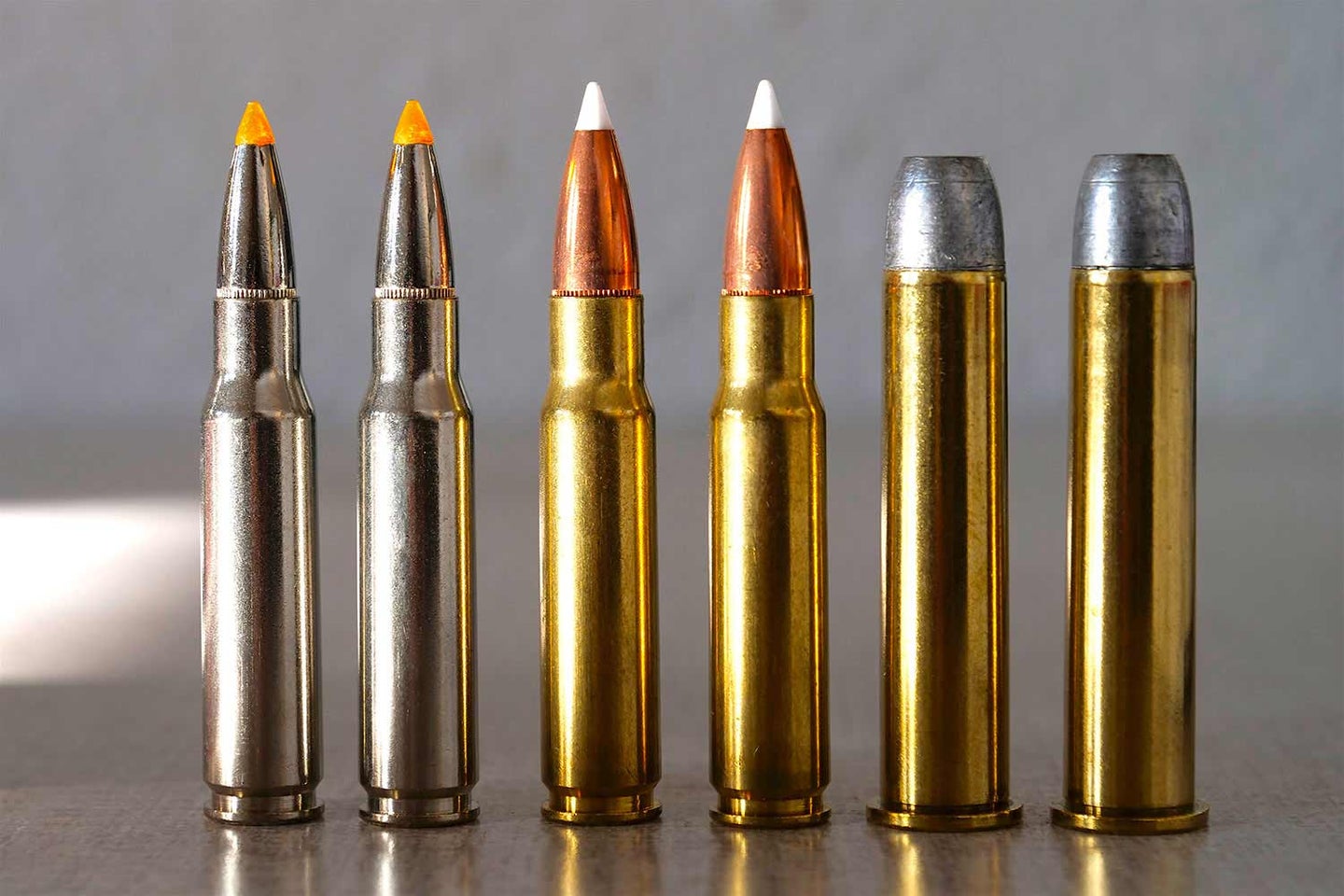 And why not? Large canine teeth, claws, and the strength to use both drive most of this concern. It’s one thing to follow up a whitetail in the dark. Tracking a black bear by flashlight is quite another. The smart move is to pick the right cartridge—one that gets the job done with authority, right now, right there.

Obviously we are going to err on the side of more rather than less. More powder, more bullet, more caliber (diameter), more kinetic energy, and more magazine capacity while we’re at it. But not at the expense of “shootability.” You don’t want to fear recoil more than you fear tracking a bear.

Actually, black bears are not as aggressive or hard to put down as many believe. Their vitals are not armor-clad. Hunters have been shooting them not just nearly dead, but really-most-sincerely dead with arrows and .243 Winchesters for decades. A mortally wounded black bear generally dashes off much like a similarly hit whitetail. What’s different is all that hair. And, in autumn, a goodly layer of subcutaneous fat. Both work to block or soak up leaking blood, minimizing an easily followed trail. Add to this the soft pads a bear runs on plus the dense vegetation in much of their preferred living spaces, and you face difficult tracking.

What we should want in an effective black bear cartridge is potential for a large exit wound to enhance blood trailing. Anchoring a bear in place is more about where you hit it than what you hit it with. Neck, head, and high shoulder shots anchor because they strike the central nervous system. Otherwise, you wait for hemorrhaging to take effect. And that can be anywhere from a few seconds to too many minutes. The bigger the hole, the better.

The odd thing about anchoring via a bigger and better cartridge/bullet is that applied horsepower doesn’t work as we might think. Bullets from shoulder-fired rifles, handguns, or even slug guns do not kill by blunt force trauma. Getting hit by a 500-grain bullet carrying 5,000 ft-lbs. of kinetic energy is not like getting hit by a 2,000-pound truck going 40 mph. The bumper, grill, and fenders of the truck spread energy over a wide area. This transfers the energy broadly across the animal, crushing muscles, bones, and internal organs. But, as any highway patrol officer can tell you, even a badly mangled animal can still cling to life long after the hit.

Compare the frontal area of a truck to that of a bullet, and suddenly even the .730-inch diameter slug from a 12-gauge looks puny. Transferring 2,000, 3,000, or even 5,000 ft-lbs of kinetic energy from that surface to a significant portion of the bear just isn’t going to happen. So don’t get too fixated on power. Focus instead on hemorrhaging, penetration, and exit wound diameter.

Yes sir, ma’am. Your bullet should enter, expand, tear vital tissues to maximize bleeding, and punch out the far side, leaving a big hole. The bullet is more important than the cartridge.

Our final consideration should be the distance to the target. A cartridge ideal for shots at 300 yards across a canyon in Idaho may be less than desirable at 30 yards in Ontario. So let’s compare three suitable and popular bear rounds to see how they stack up.

The “30-Not-Six” is essentially a shorter, lighter version of the old military .30/06 cartridge. It pushes the same .308-inch diameter bullets, just 100 to 200 fps slower. No bear is going to notice the difference.

Potential advantages to the .308 in the bear woods include portability and handling ease. This round fits a short action and can be found in bolt-actions, lever-actions, and even pump actions. Recoil is reasonable, even with heavy bullets from 180- to 200-grains. Recoil from a 180-grain slug at 2,600 fps in an 8-pound rifle should be about 19.6 ft-lbs at 12.5 fps velocity at your shoulder. Keep this in mind when comparing the bigger rounds to come.

The .308-inch bullets this cartridge propels don’t begin to qualify as “big bore,” but careful bullet selection to maximize expansion should result in mushroomed fronts slightly wider than half-an-inch. A hybrid bullet such as a Nosler Partition with a soft lead nose and encapsulated lead shank should retain enough weight to push deep despite the broadly expanded nose.

That 180-grain bullet above should produce 2,700 ft-lbs of muzzle energy and hang onto 1,750 ft-lbs at 300 yards—more than plenty to do what needs to be done. The maximum point-blank range for an 8-inch diameter target should be 290 yards. That requires a zero at 247 yards, which puts the slug 3.6 inches high at 100 yards, peaking 4 inches high at 150 yards.

The 308 Win. is quite versatile and a solid contender as a black bear cartridge. But it has competition.

Here’s the .308’s over-achieving offspring. Federal Cartridge was wise enough to “finally” legitimize this old wildcat in 2006. It doesn’t have nearly the following it deserves. Obviously, since it’s just the .308 case necked up to hold a .338-inch bullet, it’s not going to match the muzzle velocity and flat trajectory of its parent. But it’ll come close. While delivering more energy.

Stick a 225-grain bullet atop this short-action case, drive it with the expanding gases from 44 grains of rapidly burning Varget, and it leaves the airport going about 2,400 fps. In this advanced era of magnum velocities, this is pretty plodding. But so is an ox. And you don’t want one stepping on you. The slow .338 bullet steps with a force of 2,878 ft-lbs. After bucking wind for 300 yards, this drops to 1,924 ft-lbs—still more than I’d want to catch. And black bears don’t like it any better.

What’s more surprising than this punch is the bullet’s flight path. Despite gravity pulling relentlessly at 32 fps (and accelerating another 32 fps every second!) and the atmosphere constantly dragging on that bullet, it manages to stay within our 8-inch target zone clear out to 270 yards. We need to zero 3.7 inches high at 100 yards to get this, but hitting a bear 4 inches above a center chest hold is likely going to spine it. And, of course, you are free to zero lower at 100 and hold high for longer range shots.

Equally important, if not more so, is the wind deflection. Because of this bullet’s high B.C., it resists drag efficiently, deflecting just 7 inches in a 10 mph crosswind at 300 yards. That’s a smidgeon better than the .308’s 180-grain bullet can do.

Clearly, the .338 Federal is a strong contender as a black bear cartridge. Bigger bullet, heavier bullet, and similar trajectory to the highly respected (and deserved) .308 Winchester’s performance. But perhaps it doesn’t have quite the hole-making potential of our next candidate—a doddering, ancient military round that saw action at a place in Montana called the Little Bighorn.

The straight-wall .45-70 Govt. is virtually worshipped by some admirers who insist a 300- to 405-grain bullet from this old buffalo cartridge will all but turn your bear into ham and bacon with one shot.

One obvious advantage this cartridge offers is initial bullet diameter. Spanning .457 inches, it’s already punching a pretty wide hole. But let’s not assume that is enough to anchor every bear solidly hit through both lungs. Plenty of deer, let alone bears, have been center punched by .45-70 slugs and run for several seconds before succumbing to the wound. I’ve personally shot through and through small warthogs (less than 100 pounds) with a .45-70 only to watch them run 100 to 300 yards.) That said, an expanding .45-70 slug has all the energy and tissue-destroying potential to make an ideal black bear terminator. But at limited ranges.

Momentum would seem to be the answer. This is part and parcel of the old argument about velocity versus mass. Both are required to unleash damage, of course, but advocates of heavy, slow bullets insist they do more damage than lighter, faster bullets despite the higher energy levels the latter put out. “Would you rather be hit by a ping pong ball going 4,000 fps or a bowling ball going just 100 fps?”

Clearly, the mass of a 405-grain bullet suggests it’s going to keep going despite just a 1,600 fps muzzle velocity. Your chances of this one ripping lots of vital tissue before roaring out the backside are quite high. But that doesn’t mean you don’t want any expansion. More is always better unless you’re trying to penetrate several inches of solid bone to reach a brain.

It’s important to note that 1,600 fps can only be achieved in modern guns with the strength to contain the high pressure generated by big loads of smokeless powder. Many factory loads are held to mild pressures in case they are used in old rifles—particularly trapdoor Springfields from the 19th century when black powder was the engine driving these. In a modern lever-action Marlin or 1886 Winchester, for instance, higher pressures are fine. Handloaders and some factory ammo can reach 1,800 fps with 405-grain bullets. But…

Regardless how fast you push these big slugs, trajectory keeps them solidly in the rainbow coalition of cartridges. Despite a 4-inch peak trajectory at 75 yards, our 405-grain flat-nose at 1,600 fps can only reach 180 yards or so before falling out of our 8-inch target zone. Figure maximum point-blank range of the .45-70 at 175 yards. Clearly, this is not your best option for those cross-canyon western bears. But for stand hunting in dense forests and brushlands… Who’s your momma?

Among factory-loaded .45-70s you’ll find more 300-grain offerings than 405. With a fairly “soft” bullet engineered for maximum expansion, you should realize one of the larger wound channels among these three competitors. But you might not get complete penetration. One of the warthogs mentioned above absorbed a 300-grain Barnes X and kept it against the far side hide.

Clearly, a .45-70 Govt. shooter has a lot to consider, but one thing is certain: While a fine option inside of 100 yards, this is not your versatile, long-range bear medicine. Wind deflection alone will kill you. At just 200 yards a 10 mph crosswind will push that 405-grain bullet 10.5 inches.

You won’t go wrong with any of these unless you choose the .45-70 for longer range hunting. Not recommended. If you’re a confirmed stand hunter where any bear you see is guaranteed to be inside of 100 yards, the .45-70 Govt. is clearly a fine choice. Just don’t expect it to compensate for poor shot placement. That never turns out well. For an all-round black-bear cartridge for engaging them anywhere from bow range to long-range, my pick would be the fabulous .338 Federal.