Thinking about your first African safari? Wondering about what guns to take with you? Here are our choices 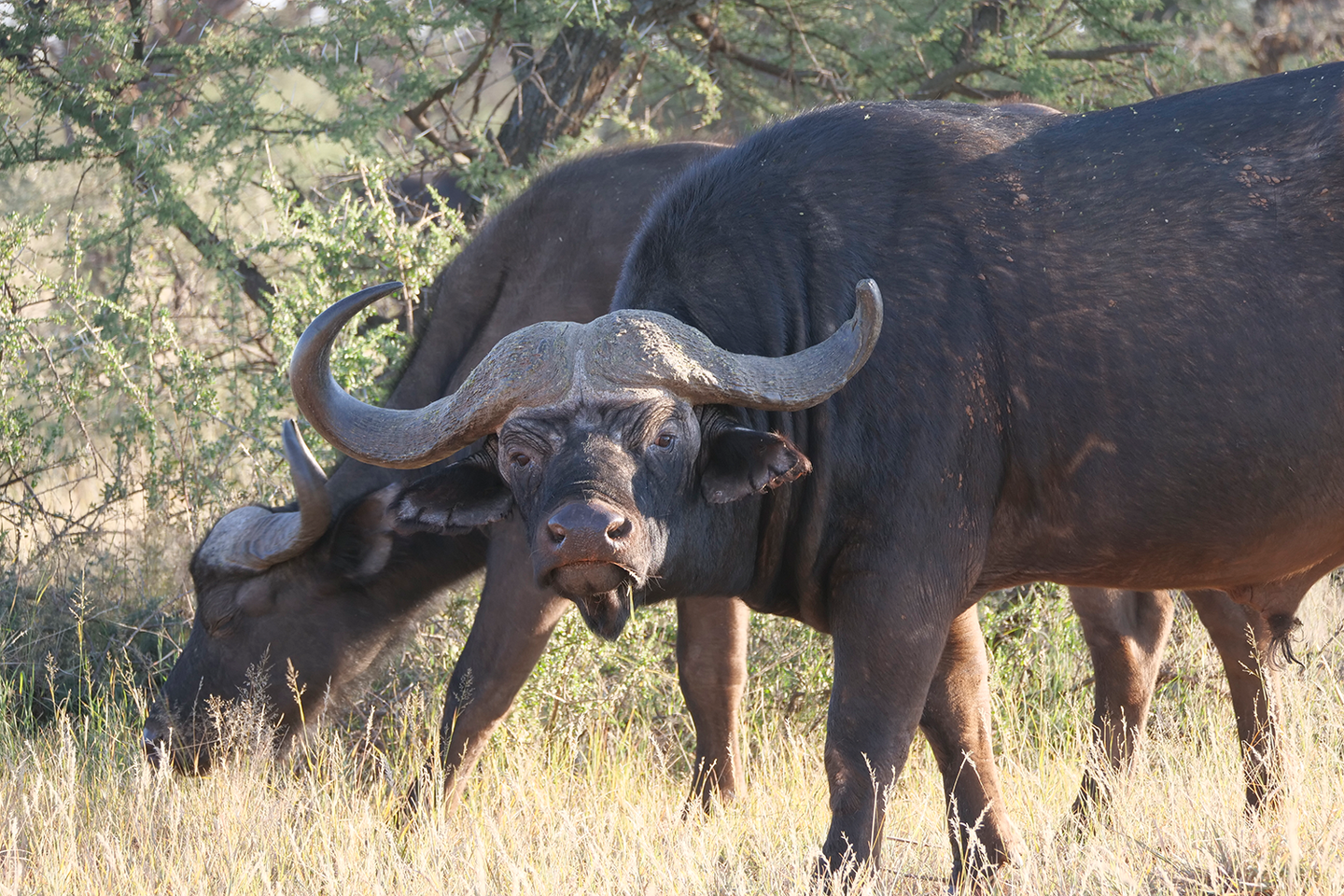 A 500-grain, .458-inch bulled starting out at 2,050 fps was more than enough to drop this cape buffalo. Ron Spomer
SHARE

Maybe your African safari is just a dream at this stage, but you can make it a reality. In fact, I recommend you do. The cost is much less than a guided North American mule deer or elk hunt. So why not edge closer to your dream safari by deciding which African cartridge/rifle you’ll shoot?

Perhaps the most famous African cartridge is the .375 H&H Magnum, but a couple of its offspring, the .416 Remington Magnum and .458 Winchester Magnum, offer more power and heavier bullets. Which would be best? Let’s examine each in depth and then you can pick your winner.

When released, the .375 was offered with 270-grain and 235-grain bullets, too. The lighter slugs were designed to shoot faster, flatter and farther for reaching smaller plains game species. All three proved to shoot so close to point of aim inside of sensible hunting distances that they could be fired interchangeably without re-sighting the rifle. Today 253-grain loads are rare, but many ammo brands offer 250-, 260, and 270-grain .375 H&H ammo. Trajectory with Federal’s 260-grain Nosler Accubond load is identical to the Federal 180-grain Nosler Accubond .30-06 load to 400 yards, making it a great option for smaller antelope.

The H&H was originally tailored for ideal performance in Holland & Holland’s Mauser M98 repeating bolt-action magazine rifle. By 1912, the Mauser had proven itself the slickest, fastest, strongest, most durable and trustworthy repeater in the world, and that began changing attitudes about suitable African rifles. It might not have provided as fast a second shot as the doubles, but the 4 or 5 rounds stored in its box magazine made up for that. All it needed was a new powerful cartridge. The .375 H&H proved to be it. Nice to have when something like the infamously durable Cape buffalo came charging with revenge on its mind.

What most folks wonder about the .375 H&H is that belt. It’s been widely imagined to strengthen the case against the incredible pressures a magnum must produce. The .375 is rated for an average pressure of 62,000 psi, which is significant, but less than the 65,000 psi of the un-belted .270 Winchester and .22-250 Remington. So why the belt? To precisely headspace the cartridge. Headspacing is the mechanical process of limiting how far into the chamber a cartridge will go. Without a tight fit (minimum headspace) the firing pin can push the cartridge forward instead of crushing and igniting the primer. Modern bottlenecked cartridges like the .270 Win. are stopped by their rather sharp shoulders deep inside the chamber. The .375 H&H shoulder was sufficiently small and sloped that engineers felt it insufficient for dependable headspacing. They added the belt which abuts a mirrored rim reamed into the chamber.

Read Next: Why Hunting Africa Has Nothing To Do With Trophy Hunting

Given the inconsistency and volativity of early smokeless powders, the taper of the 375 H&H proved useful for easy cycling and, especially, extraction of hot rounds made all the hotter by tropical heat. Initially envisioned as suitable for medium game like eland, lions, tigers, and bears, oh my (I couldn’t resist,) the 300-grain slugs soon proved adequate for hippo, buffalo and even elephants. In time the .375 H&H earned its place as the go-to, do-all world beater, the ideal one-gun cartridge for handling anything. But it would eventually give birth to competition, as we’ll see below.

Compared to the 7mm Rem. Mag., the .416 Rem. Mag. is sort of the homely, unknown sister, but not due to any of its shortcomings. In fact there are no shortcomings to this cartridge unless you consider too much bullet, power, and recoil as shortcomings. Well, maybe the recoil. But I know women who weigh 120-pounds soaking wet in waders and shoot a .416 Rem. Mag.

As the title indicates, this magnum spits a .416” bullet weighing 350- or 400-grains, although some 450-grain options are out there. I suspect Remington brought it to life to replace the 416 Rigby which was moribund in 1988. In power and trajectory these .416s are an even match, but the Remington is chambered in more affordable rifles like the M700. Ammo is slightly less expensive, too, at $2 to $5 per shot compared to Rigby’s at $4 to $8 a pop. Most 416 Rem. Mag. loads burn about 77 grains of powder to drive a 400-grain slug 2,400 fps. This produces 5,100 ft-lbs energy. That’s a whumping heap, and you’ll feel it at the butt as almost 64 tf-lbs of recoil in a 9-pound rifle. But if a small woman can shoot it, you’re surely not going to shy away, are you?

In my experience, the .416 Rem. Mag. definitely lets you know it’s gone off, but it isn’t sharp or punishing. At least not in the several rifles I’ve fired. A Dakota M76 was particularly well controlled and eminently shootable. But I wouldn’t want this in a lightweight rifle with a skinny butt and sharp-edged comb. I have noticed that after about 18 or 20 rounds in one setting, I tend to get a headache, so don’t get a .416 Rem. Mag. for prairie dog shooting.

In all seriousness, before considering this .416, ask yourself what you’ll most commonly hunt with it. Most safaris these days include a buffalo or two, sometimes a hippo or elephant, rarely a lion, but commonly a lot of plains game varying in size from 10-pound dik-dik antelope up to 2,000-pound eland. There are quite a few African species the size of elk and heavier and the .416 is a solid option for them. And there’s always the chance you’ll need to discourage something large and unfriendly at short range. The .416’s additional punch over the .375’s might work to your advantage. The .416 Rem. Mag. is also a well respected bear stopper in Alaska. Many find it good moose medicine, too.

Because most 400-grain bullets are rather poorly shaped for ballistic efficiency, this cartridge can’t match the 375 for long range work, but if you don’t mind your bullet striking 1.5-inches high at 50 yards and 3 inches high at 125 yards, you could zero your .416 Rem.Mag. at 200 yards. That will extend MPBR to 250 yards or so. That’s hardly long range stuff, but it’s longer than our next cartridge can manage…

Like the .416 Remington Magnum, the .458 Win. Mag. springs from the .375 H&H. But it arose way back in 1956 when most truly large bore, dangerous game rifles were chambered 450 or 470 Nitro Express or larger in big, magnum double rifles few Americans could afford. Winchester engineers wisely shortened the magnum-length (3.6”) 375 H&H case to the 30-06 length of 3.34”. This meant it could be chambered in standard Model 70 rifles. Winner winner chicken dinner. Affordable, readily available rifles and ammo soon inspired not only American sportsmen, but African PHs to grab this big, new .45.

As you might guess, there is no bottleneck on this case. The brass tapers minimally from .513” at its base to .481” at its mouth, just enough to hold a .458” bullet while leaving enough taper for easy feeding and extraction. The case generally burns about 68-grains of powder to accelerate a 500-grain bullet 2,050 to 2,200 fps, fast enough to generate 5,000 to 5,500 ft-lbs energy from a 24” barrel. Recoil? Oh, there is some. Count on about 73 ft-lbs to slap you around if you’re shooting a 9-pound rifle. You might want to add another pound or two to soften the blow.

While experienced African PHs like this horsepower for addressing elephants and charging buffalos, few hunters appreciate the looping trajectory curve these heavy, generally blunt-nosed bullets scribe. Zero a 500-grain Federal Trophy Bonded Sledgehammer at 150 yards and it will strike about 2.5 inches high at 100, fall 6 inches low at 200, and plummet 15 inches at 300 yards. Not exactly an open country, long-range tool. But don’t write it off. In many game rich parts of Africa, thick brush makes 200-yard shots rare and about as long as you’ll be offered. A clear understanding of this trajectory coupled with lots of practice could make the 458 Win. Mag. an easy, dead-on-hold rifle for all your safari shooting.

Where, What, and How You’ll Hunt

While pondering these three popular African big bores, consider what, where, and how you’ll hunt. If your main interest is truly big, dangerous species like buffalo, lion, elephant and possibly leopard, the biggest slug you can throw precisely might be your best option. Should the stuff hit the fan, you might welcome the extra punch, too. But if the recoil makes you flinch…

Realistically your PH will be handling any emergencies. In many cases the client isn’t even welcomed on a search for wounded game likely to charge at close range. So you might want to downplay your perceived need for self-defense in favor of a more precise first shot. The right bullet in the right place is always more effective than a heavier, harder-hitting bullet in the wrong place.

Should a wide variety of game be in your sights, the bigger rounds might not be ideal either. Plains game antelope are routinely taken with 338 Win. Mag., various 300 magnums, .30-06, .308 Winchesters and even 6.5 Creedmoors these days. We’re not saying all of these are optimum, but with today’s premium bullets, many PHs prefer clients bring rifles they can shoot precisely rather than big thumpers that make them flinch. But if buffalo are on your to-do list, you’ll want one of the big boys.

It was a foregone conclusion that the .375 H&H would be our pick. It’s just too versatile to pass over. Virtually everyone can shoot it more precisely than either of the other two. Ammo is cheaper so you’re liable to practice more. Maximum point blank range is much greater so you can engage plains game at greater distances. And the .375 isn’t a bad option for Alaskan bears, Canadian moose and even Rocky Mountain elk, making it a rifle you’ll use more often.

That said, if you’re the kind of hunter who enjoys magnum recoil as well as magnum thump, if you like stalking close and ending the game dramatically, either the .416 Rem. Mag. or .458 Win. Mag. will serve you well.