Be ready when they get hungry--the bite won't last long. 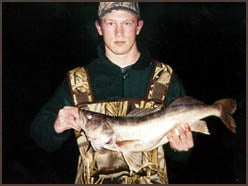 Fishing for walleyes after they’ve spawned is a boom-or-bust proposition. In a year when conditions are just right, the post-spawn bite can be fabulous. After eating practically nothing during the spawning period, the fish are famished, as evidenced by their sunken bellies. The previous year’s baitfish hatch has been whittled down and the current year’s hatch has yet to occur, so food availability is at an annual low. On a good day, walleyes seem to be constantly on the prowl, and hit baits with gusto.

But when environmental factors are not in your favor, you’d swear your lake was fished out. What’s an angler to do?

Timing Is the Key
The problem is, walleyes bite like mad for a week or two before spawning, but once the spawn begins, the action comes to a sudden halt-the male fish have other things on their minds and the spawning act leaves the females in a weakened condition. The bite picks up again a couple of weeks after the spawn ends. If you happen to schedule your fishing trip during the “post-spawn recuperation period,” you might be choking down baloney sandwiches instead of walleye fillets.

It’s usually easy to learn when the walleyes spawned in a particular lake. Resorters, fish managers and bait-shop operators should be able to give you a pretty good idea. If their answers indicate that most spawning isn’t at least 10 days in the past, the best thing to do is look for another body of water where the timing is more favorable.

If nobody you speak to has a clue on timing of the spawn, ask when the ice went out. Most walleyes finish spawning within three weeks of the ice-out date. As a rule, walleyes spawn earlier in rivers than in lakes, in shallow lakes than in deep ones, in small lakes than in large ones and in low-clarity lakes than in clear ones. Latitude is a factor as well. All else being equal, spawning is delayed about one day for every 35 miles you go north in walleye country. So if you were planning to fish a deep, clear lake, but learned that the walleyes just finished spawning a few days earlier, consider trying a nearby river or a shallower, dingier lake in the same area. Otherwise, look for a lake a bit farther south.

Make the Best of It
Let’s say you’ve been invited to your buddy’s cabin for the weekend and are obligated to fish on his lake, even though conditions are not ideal. Here are some tips that will swing the odds in your favor:

When the wind is howling, it’s easy to spot the good walleye anglers in the pack; they’re bouncing around in the rough water and catching fish. The novice anglers are working the lee shore or hiding behind a point where the water is calmer, wondering why the walleyes aren’t biting.

When it comes to chasing post-spawn walleyes, there are no guarantees. A sudden cold snap can shut down ravenous feeders in only a few hours. And a warm south wind can swing the pendulum the other way just as quickly. But if you follow the rules outlined here, you can feed those cold baloney sandwiches to your dog.