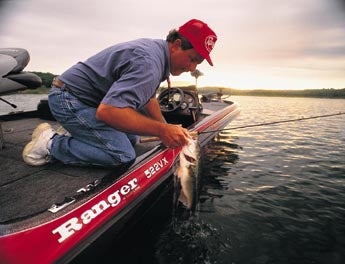 Many articles have been written about how bass think with regard to where they are likely to be at certain times of the day and year, and how they react to different lures and presentations. Anyplace bass fishermen gather you’ll hear various opinions on the subject of bass hangouts and habits, some of which foster friendly arguments.

I had my own ideas on the topic, too, until a dedicated fisheries biologist named Mike Lembeck disabused me of some of the notions I’d held for many years. My education came during one of Lembeck’s studies of bass in six California lakes. Lembeck used sonic telemetry to track the fish’s movements at various times of the day.

Hooked on Sonics
Sonic telemetry involves planting a miniature radio transmitter inside a bass’s body. The operation to implant the bug is harmless and each transmitter has its own “beep code” to identify it and the bass in which it is implanted. Lembeck, who was conducting the study at the behest of San Diego County Fish and Wildlife Committee when I visited with him, was tracking the movements of tagged fish using an aquaphone mounted on a short rod and lowered over the side of a boat.

In each lake, the aquaphone picked up the signals of the transmitters and let Lembeck know the whereabouts of the bass that wore them. The sizes of the 147 fish in the study ranged from 1 pound 4 ounces to 14 pounds, and included bass in such storied lakes as El Capitan and San Vicente. I spent a couple of summer days on El Capitan with Lembeck and returned home much savvier about where bass are likely to be, and their reactions to lures and the presence of perceived danger.

One morning, after donning earphones and submerging the aquaphone receiver, Lembeck listened for a while until he signaled me that he heard a beeping signal. Then he looked at his stopwatch to measure the time between beeps so he could identify the fish transmitting the signal. He gestured toward a small treetop that had collected windblown debris in its branches. It was several yards away, but within casting distance. “The signal I’m picking up tells me it’s ‘Mabel.’ She’s five years old, weighs about six pounds and probably never will be caught, but not because fishermen don’t fish here.

“My test shows that either Mabel is well educated about angler sounds and ignores any lures, or she is just one of those fish that takes off for deeper water whenever she suspects a dangerous intruder is in the neighborhood.”

Tempting Mabel
At that point I decided Mabel had to be caught and I was the fisherman who would do it. Fishing around in my tackle box, I rigged up with a plastic worm and told Lembeck my plan. “I’m going to try something tricky that maybe Mabel hasn’t seen.” I cast the worm about 10 feet past the woody cover, reeled it slowly back until it was just outside the pile and let it sit there, doing nothing. It was only a matter of time before the curious bass came out from her hiding place and inhaled the worm…or so I thought.

At that moment, I saw the aquaphone rod in Lembeck’s hand turn and move toward open water. “There she goes, about a hundred feet down the shore and still going,” he said with a grin. “I told you, if anything comes near her hangout, big or little, Mabel takes off like a scared rabbit. She is a survivor, like a lot of bass on heavily fished lakes. Probably, she never will be fooled by a fisherman.”

By that time, Lembeck’s study was two years old and he had learned a lot about bass and how they perceive things in their watery world. Among the lessons suggested by Lembeck’s findings are the following:

1. Hit the sunny banks
Bass display no preference regarding sunlight. They do not select the shady side of cover, nor do they go deeper to find shade during high noon hours. If food is available in the area, and all other conditions are favorable, bass will sstay in that location no matter the time of day or the amount of sunlight that’s illuminating the water.

3. Put a bait in all cover
Some bass that Lembeck tracked showed a preference for small hiding places. One bass would stay around a single rock, another near a submerged bush, a third behind a cluster of weeds. Others chose to hang out in thick weed beds or dense brush. Still others were roamers, almost always cruising around the lake.

4. Find offshore haunts
Bigger bass-those in the 6- to 10-pound class-usually stay sequestered in one hangout away from the bank most of the year except when they move into the shallows to spawn or when a special feeding opportunity presents itself. Lembeck noted that the favorite haunts of bigger bass often were brushy, weedy or rocky points where deep water was close by.

5. Fish below shad
In late summer, it’s common for bass of all sizes to school and attack roving shad. According to Lembeck’s study, when the bigger bass in a lake gathered to follow summer shad migrations, they cruised below a shad school, not behind it. And the biggest bass stayed below the smaller ones, dining on crippled shad that filtered down to their level.

6. Revisit fishy spots
In his telemetry studies, Lembeck discovered that some bass just never learn, despite being caught multiple times. If caught and released, they might return to the same cover and fall for the exact same fishing tactics later. Lembeck also found that bass in deeper water were less wary than bass that hid in shallow covers.

In fact, when bass are stacked up along a channel or over a hump in deeper water, they can be easy to catch. The harder task is locating them in the first place.