Of Wind and Walleyes

Walleyes like rough water, so don't scurry for cover when the lake gets choppy in stormy winter weather. 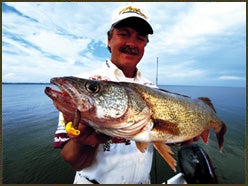 “Hold on Tim,” I yelled as we rounded the point and headed into the main lake. “It’s going to be a bumpy ride.”

It was only 6:30 a.m., and the wind was already cranked up to 20 mph. From a mile away, I could see the whitecaps breaking off the shoreline of the island where I wanted to fish. As we pounded our way toward the windward shore, ducking the spray from each wave, Tim spotted three boats tucked in on the lee side of the island, fishing in the calm water.

“Looks like they’re on fish,” he observed, hoping to get me to change my course.

“Could be,” I allowed. “But I’ll bet they’re just trying to get out of the wind. Let’s hit the front side of the island first.”

The waves slapping into the rocky face of the island were at least three feet high, so I knew it would be hard to control the boat. Holding our position just upwind of a rocky spit jutting out from the island, I told Tim to drop the anchor. As I was waiting to see if the boat would settle into the right position, Tim grabbed his rod and flipped a jig-and-minnow toward the spit. “Got one,” he blurted out as his rod doubled over. A few minutes later, he was admiring a chunky 31/2-pound walleye.

“It took you at least ten seconds to stick that one,” I pointed out. “Are you sure you want to fish in the calm water?”

“No, let’s stay right where we are for a while,” he said.

He had just learned an important lesson that only the most savvy walleye anglers understand: There’s a connection between wind and walleyes. Here’s why it’s usually a good idea to fish on the windward shore. The wind concentrates plankton along the downwind shoreline, drawing baitfish and, at the same time, muddying up the water. It doesn’t take walleyes long to discover the forage gold mine and, once they do, the reduced clarity lets them feed efficiently. In the darker-than-usual environment, their superior dim-light vision provides them with a huge predatory advantage over most baitfish.

If the wind pounds the same area for two days or more, call work and tell your boss you suddenly came down with the flu. Hit the water: You could be in for a walleye-fishing bonanza.

High-Percentage Locations
You can find walleyes along almost any wind-beaten shoreline, but the very best spots generally have the following two features.

Shallow Lips, Sharp Drops
An extended lip from 3 to 10 feet deep gives walleyes a good feeding shelf, and a sharp drop makes it easy for them to retreat to deep water once they’re done feeding. You’re much less likely to find the fish on a shallow food shelf that tapers gradually into deeper water, because the fish would have to swim much farther to reach their deep resting areas.

In man-made lakes, look for walleyes along windswept shorelines in close proximity to the old river channel. In most of these waters, the river channel meanders back and forth across the lake, brushing the shoreline on one side and then veering to the opposite shoreline.

**A Rocky or Gravelly Bottom **
Walleyes usually steer clear of soft, muddy bottoms, and your chances of finding them there are even slimmer when the wind is blasting into shore, churning up the bottom and turning the water into a thick, murky soup. A little mud is good, but too much drives the fish away. Walleyes evidently don’t like getting silt particles in their gills.

A rocky or gravelly bottom offers reduced clarity without the heavy silt load, but there’s another reason why it’s such a walleye magnet: The rocky substrate holds a wide variety of invertebrate life. The wave action dislodges immature insects, tiny crustaceans and other minute organisms that give baitfish more reason to swim into the murk.

The very best spot along a rocky shoreline is a point or underwater spit, because it concentrates the fish. Just athe wind activates walleyes along the downwind shoreline and on the windward side of islands, it also spurs feeding activity on shallow, submerged windswept reefs. On windy days, they’ll be right on top of the reefs, usually at depths of six to eight feet and sometimes as shallow as three feet.

The Right Presentation
Walleyes feeding in rough water are not fussy; they’ll grab almost any kind of lure or bait that comes their way. The problem is they’re often in shallow water where snags are inevitable. For consistent success, you must be willing to toss your lure within inches of shore. Over the years, I’ve come to rely on three presentations.

1. Casting Cranks When searching for walleyes on a windswept shoreline or reef, it’s hard to beat a crankbait. Not only does a crankbait enable you to quickly cover a lot of water, but it has an unequalled triggering effect. An actively feeding walleye has a hard time resisting a crank-bait bumping the rocks and kicking up silt. The downside to a crank is that it won’t interest the less-aggressive fish.

I use a crankbait as a “locator” lure, methodically working my way along a likely shoreline or reef and making a cast every five feet or so. When I hook a walleye, I’ll make a few more casts in that area to catch any more hot biters, but then I’ll switch to a slower presentation.

The exact model is not as important as the running depth. Ideally, the bait should tick the bottom once or twice on the retrieve, but it shouldn’t grind into the rocks and come back with a wad of algae on every cast.

2. Pitching Jigs
Once you’ve found the fish, a jig will usually outproduce a crankbait. With a jig, you can work your spot more slowly and thoroughly and tempt the less-aggressive biters.

With the wind at your back, pitch a jig tipped with a minnow or curlytail grub right into shore. The weight of the jig is crucial: Too heavy and you’re stuck in the rocks; too light and the wind will catch your line and prevent the jig from sinking. In a moderate wind, I normally use a one-eighth-ounce jig; in a stiff wind, a quarter-ounce.

Maintain contact with the bottom, working the jig back in short hops. If the wind is buffeting your line and preventing your jig from reaching bottom, hold your rod tip just above the water to get rid of the belly. When pitching jigs into the rocks, you’re going to get snagged. Instead of running your boat into the shallows, banging up your prop and spooking the fish, just break your line and tie on another jig. I normally use 6-pound-test mono but, if it’s really rocky, I’ll switch to 8-pound, which is heavy enough to straighten out a wire jig hook on at least half the snags.

3. Slip-Bobber Fishing
A slip-bobber rig baited with a lively leech is ideal for working a rocky reef of fairly uniform depth. Just anchor your boat upwind of the reef, set your float to keep the bait just above the rocks, and let the wind carry the rig across the reef. By varying the angle of your casts, you can cover a swath of water at least 75 feet wide from one anchor position. On a large reef, you’ll have to anchor several times for thorough coverage. Don’t make the mistake of anchoring to the side of the reef and casting crosswind. If you do, the wind will bow your line and drag your rig across the reef too fast.

If you don’t use enough weight on your slip bobber, the wind will prevent the line from sliding through the float and your bait will never make it to the bottom. The solution is to use a big float and balance it with a sinker weighing three-eighths to one-half ounce. The extra weight will also slow down your drift, keeping your bait in the fish zone longer.