How to Find Big Bluegills in the Heat of Summer

Tired of dink-sized summertime panfish? Time to fish deep and load the boat with the biggest bluegills you’ll catch all season. 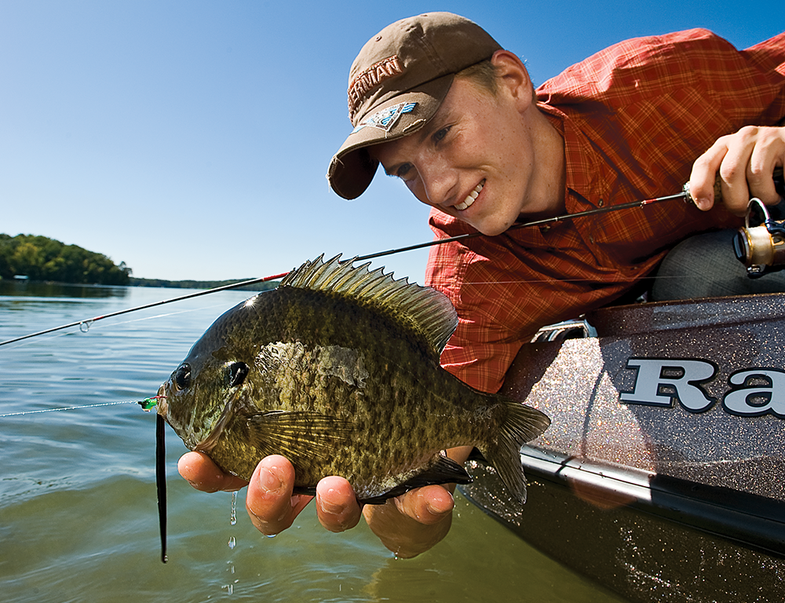 I’m no Parrothead, but for the life of me I couldn’t rid my brain of the sound and vision of a throng of Jimmy Buffet devotees shouting the words to “Fins”—“You got fins to the left, fins to the right, and you’re the only bait in town.” That Buffet is a maniacal big-game saltwater angler and I was filling a bucket with bluegills didn’t seem to matter. I was catching—and it was good. I also knew that it wouldn’t last. The summer sun eventually scorches those perfect hotspots, and all those fins melt away to parts unknown. Or do they?

According to a 1999 South Dakota State University study conducted at Richmond Lake, larger bluegills wean themselves off zooplankton and rely much more on macroinvertebrates, or aquatic insects, as the summer progresses. This is especially true for fish larger than 8 inches. Because aquatic insects live mostly among weed beds, anglers can draw some basic conclusions about where they will be found when weeds are available. But which weed beds should you target? And what baits should you have with you in the boat?

In summer, Minnesota guide Brian Brosdahl begins tracking summertime bluegills by looking for healthy, green weeds. Coontail and milfoil are two of Brosdahl’s favorite targets because both create canopies of cover on the surface and travel corridors beneath it. This combination allows the bluegills to hunt for food while remaining hidden from predatory fish.

Brosdahl probes further, employing side-imaging electronics in a hunt for edges. He specifically searches for cups and points, which attract fish. Intersecting breaks or other structure are also prime holding zones, as are pockets, or bald spots, along a weed edge that might indicate a change in bottom composition—rocks or wood. These subtle variations within a weed edge will be especially attractive to big bluegills.

“Sometimes you can see scatter [nebulous screen marks] from 75 feet away with side imaging,” says Brosdahl. “Zoom in to get a better look and mark coordinates.”

Weed beds in 5 to 12 feet of water can be probed with search baits such as Beetlespins, but deep weeds must be jigged with small soft-plastics, and icefishing spoons. One of Brosdahl’s favorites is the 1/32- or 1/8-ounce Buckshot Rattlespoon icefishing lure with a piece of crawler added. Fire tiger is his color of choice, but any bright color should attract strikes.

Once Brosdahl finds fish, he’ll employ a simple slip-bobber rig with a small jig. He recommends colored 1/32- to 1/8-ounce jigheads with a tiny leech or a pinch of nightcrawler.

Like Brosdahl, Wisconsin guide Troy Peterson looks for healthy green weeds. However, Peterson has a singular approach to finding those weed beds.

“I mostly fish smaller lakes—30 to 100 acres,” says Peterson. “I look for adjoining basins and then look for the deepest, greenest weeds growing along the boundary between the two basins.”

The underwater point formed by the two basins coming together provides not only structure to attract fish but also a patch between deeper water where light penetration is optimal for healthy weed growth. With structure, shallow water adjacent to deep water, and a healthy dose of weeds, these boundaries between basins can often result in a perfect storm of summertime bluegill habitat.

“I find giant bluegills in lakes with deep water—and when I say deep, I mean 40 feet,” says Peterson. “Early and late in the day, they may move up to 8 to 10 feet deep. But when the sun is high, they’ll be out to 30 feet.”

Peterson casts 1/32-ounce Custom and Spins Ratso jigs tipped with wax worms. He also recommends a slip bobber with a 1/64-ounce jighead and a leech.

When fish suspend in deeper water, they usually school in large numbers. Peterson pinpoints their location with electronics and then sets up a drift.

“I take two rods and hang them over the boat—like dead sticks,” he says. “I then tie a hookless spoon above a Ratso jig.”

The spoon serves as an attractor and a weight. Peterson prefers a Haley 25mm to 35mm copper-colored spoon. He then adds a third rod with a slender spoon to his presentation and begins snap-jigging. When a fish hits the spoon, the two dead sticks will typically also get hit­—quite hard and very often.