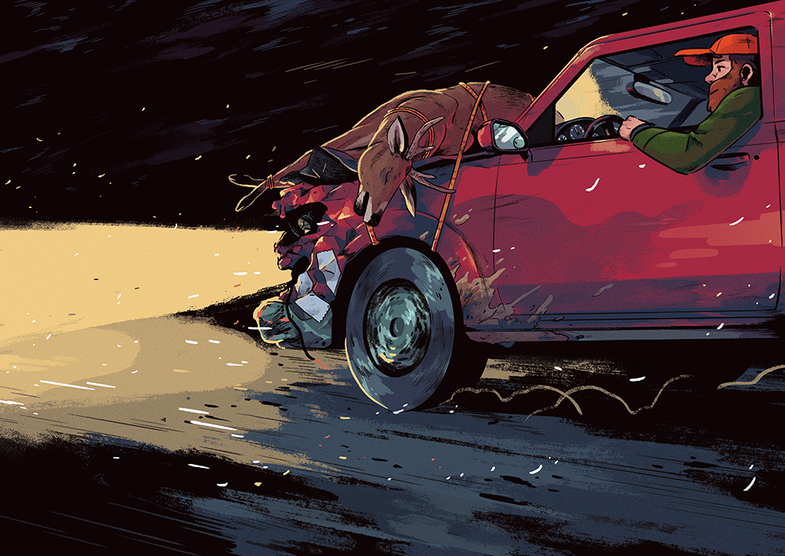 My father says there are two kinds of people: those who have hit deer, and those who will hit deer.

I entered the first group while driving home to Missoula, Mont., after a weekend at my parents’ north-central Montana farm. The entire incident—from seeing the whitetail doe sail over the barbed-wire fence along the highway to the impact with my car—took less than a second. But the guilt I felt at unintentionally taking a deer’s life stayed with me even longer than the significant dent in my vehicle’s body.

Luckily, I had a way to ease my conscience: by utilizing the meat from the deer. In 2013, Montana’s state legislature passed a law allowing the Fish, Wildlife & Parks Department to establish the Vehicle-Killed Wildlife Salvage Permit. Because of this provision, I was able to take that doe, whose body sustained only minimal damage, and butcher her when I got home.

I’m not the only remorseful driver who has taken meat from road-killed game. Two years into the program, Montana FWP has issued almost 1,650 permits. More than 1,000 were used on whitetails, 281 on mule deer, and 276 on elk. Sixty-one moose and 11 antelope have also been legally salvaged. Sixty-five percent of these salvaged animals were classified as “found by roadside.” The remainder were designated “hit by my vehicle.”

THE 8 BEST MEAT HUNTS IN AMERICA

In Montana, permits can only be issued for deer, elk, moose, and antelope. Idaho allows drivers to salvage black bears and bighorn sheep in addition to more common big-game species. In Ohio, anyone wanting to legally salvage a deer is required to obtain a “carcass receipt,” but the numbers are not tracked statewide. Louisiana and a handful of other states require game wardens to inspect the carcass before the motorist can take possession, verifying that the animal was killed by a vehicle and not some other means. Salvaging roadkill is prohibited in California, Oregon, Washington, Nevada, Texas, and Alaska.

ACCIDENTAL ENTRÉE
It was difficult, at first, to wrap my mind around eating something killed by my vehicle instead of my bullet or arrow. Before utilizing the permit system, I pictured roadkill as putrid rabbits or flattened skunks, not prime wild meat. Pulling that first package of salvaged steak from the freezer somehow felt wrong, and once it thawed, I inspected it with much more scrutiny than I would any meat I had collected by hunting. I smelled it. I judged it for signs of unacceptable discoloration or bruising.

But any apprehension I had vanished when I took the first bite. It was as tasty and tender as any doe I might have killed in my father’s alfalfa field. I immediately realized the purpose of the FWP permit system. Now the meat in my freezer identified with a red “R” in permanent marker is prized, not only for its quality, but because it has allowed me to make the best of an unfortunate situation.

HOW TO BE A BETTER BIG-GAME BUTCHER

ROADKILL RECORD
Although the majority of states allow vehicle-killed wildlife to be salvaged, few keep detailed records like Montana. The following were provided by state officials and represent species legally salvaged along roadsides in 2014.