Q&A with the Crow Man: Todd Gifford Takes Out Avian Pests for a Living

Todd Gifford specializes in avian pest control, specifically crows and pigeons. It’s his job to walk that sometimes-blurry line between... 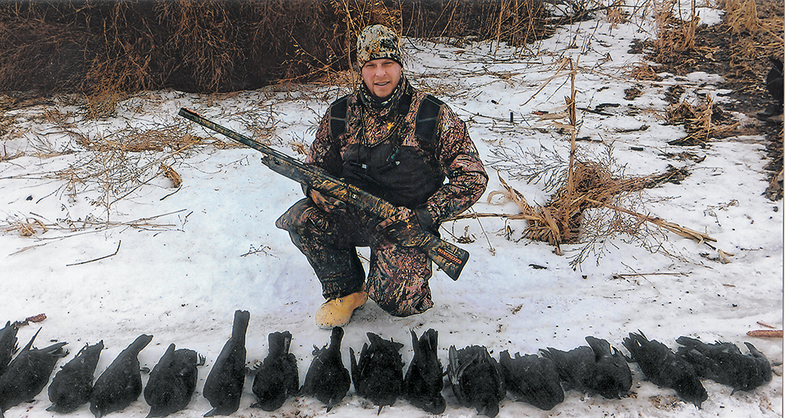 Todd Gifford specializes in avian pest control, specifically crows and pigeons. It’s his job to walk that sometimes-blurry line between hunting and extermination.

Outdoor Life: Why crows?
Todd Gifford: When I was a kid, crow season started on July 1. It was like the first hunting season open. So a few of my friends and I figured out that if we started hunting crows like how we hunted waterfowl, we’d be really sharp at it by the duck opener. So we formed this little club of like five dudes and we’d go out, scout, and crow hunt. We had a big boombox and we’d always blast the same tape: Johnny Stewart’s #205 fighting crow. That’s just what we’d do for fun.

OL: So, crow hunting is like hunting mallards?
TG: Yeah, I’d say they’re more like pintails even. They can be tough. If anything is wrong with your spread or your hide, they’ll fly right by you and not even give you the time of day. I use fully flocked decoys. But still, you have to be exactly on the X, and that’s the only way to crush out on crows.

OL: Now you’re in pest control, specializing in birds. Just what kind of damage do crows do?
TG: It’s mostly sweet corn ears. Crows are getting into murders at just about the same time that the sweetness of the corn is getting to the top of the ear. So they eat the first few inches of the ear and then it rots. I’ve got a friend who has literally two miles of field edge that will get eaten by crows. They’ll also get into hay and pea fields. You’ll never kill them all, but I put pressure on them, disperse the flock and try to keep them out of the area. And, because they’re a migratory bird, you can only shoot them; you can’t trap or poison them.

OL: What’s the key to successful bird control?
TG: I’ve got to be covert. People don’t want the crows, but they don’t want to actually see the pest control happen either. Some people will freak out if they even spot a gun. When I was younger I took more chances, but now that I’m older I’m way more on edge dude.

OL: What’s your protocol for scouting out a site?
TG: I’ll visit a site multiple times, during different times of day, before I’ll actually shoot there. Where can I blend in? Where can I snipe from? Then I’ll look at the place on Google Earth and study the terrain and pattern the birds. If it’s out in the country, you just pattern the crows, make a game plan and then go kick their ass. In a more populated area [like with a pigeon shoot, for example] I’ll talk to my site supervisor and see who is going to be pissed if they see me shooting birds. Then, if I see that guy, I won’t shoot that day. Besides that, I don’t leave a trace. I use metro barrels on my shotgun or shoot air rifles. I pick up all the birds, use peroxide to clean up the blood, and I’m gone. It’s like I was never even there.

OL: What sort of qualifications do you need for your job?
TG: You have to go through four years as a journeyman and have 40 hours of class time. Then there’s a master test you have to pass. You study animal and insect identification. Part of the test is like 200 questions on critter identification. Then you learn about all the chemical products and firearms you use. You have to know, for example, that if you’re shooting inside a building and you don’t want a pellet to go through a wall, you need to be using a 500 fps .177 air rifle.

OL: What’s one of the most unique cases you’ve ever had?
TG: There were two crows that were attacking the hell out of people in a museum parking lot. Someone was feeding them in a nearby neighborhood, which is illegal, so I got the DNR involved and they told me to take the crows out. I couldn’t shoot the crows in the guy’s yard, so I found their secondary roost near the museum; it took me almost two weeks to get them figured out. I was in there at 3 a.m. in a ghillie suit proned out. I got one the first day at 7 a.m. and got the second one three days later. It was sad that the guy lost his pets, but there’s nothing worse than someone trying to domesticate wild birds.