Hunting Ducks from a U.S. Naval Destroyer During the Korean War

"My weapon, a bolt-action Springfield of vintage 1918; my duck boat, one of Uncle Sam's 2,100-ton destroyers. The box score: eleven ducks (Communist, of course)" 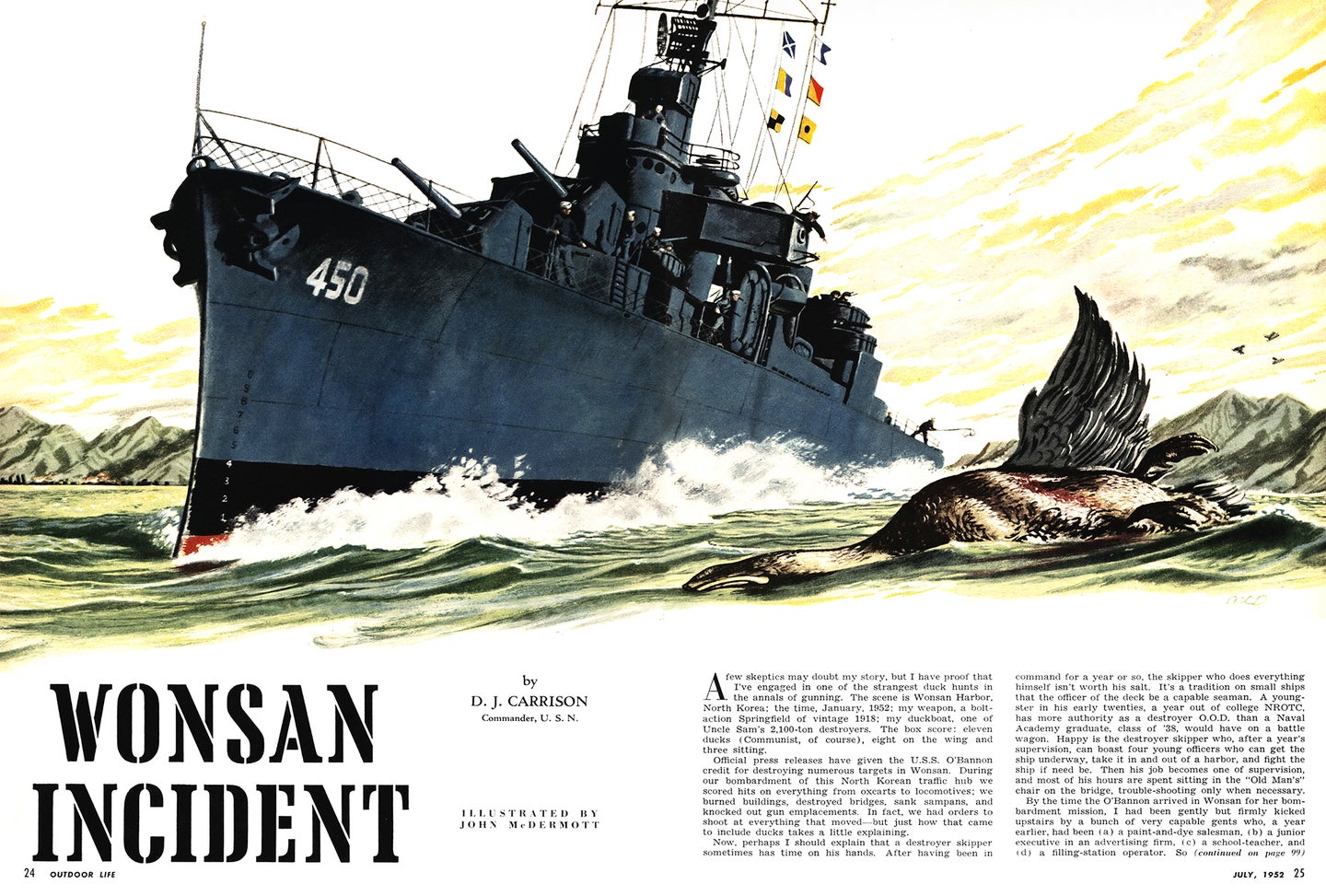 The commanding officer of the USS O'Bannon details shooting ducks on the wing with a 1918 Springfield off the coast of North Korea in "The Wonsan Incident," which was published in Outdoor Life in May 1951. Illustration by John McDermott / Outdoor Life
SHARE

This story was originally published as “The Wonsan Incident” in the May 1951 issue of Outdoor Life. The author, Daniel Jordan Carrison, served in World War II and was awarded the Bronze Star Medal with Combat “V” for “meritorious service as Gunnery Officer of the USS Yorktown, during operations against enemy Japanese forces on the Japanese Mainland” in summer 1945. This story, however, was written during his post as Commanding Officer of the USS O’Bannon from December 4, 1951 to April 2, 1953 in Korea. His service there earned him a Gold Star.

A few skeptics may doubt my story, but I have proof that I’ve engaged in one of the strangest duck hunts in the annals of gunning. The scene is Wonsan Harbor, North Korea; the time, January, 1952; my weapon, a bolt-action Springfield of vintage 1918; my duck boat, one of Uncle Sam’s 2,100-ton destroyers. The box score: eleven ducks (Communist, of course), eight on the wing and three sitting.

Official press releases have given the U.S.S. O’Bannon credit for destroying numerous targets in Wonsan. During our bombardment of this North Korean traffic hub we scored hits on everything from oxcarts to locomotives; we burned buildings, destroyed bridges, sank sampans, and knocked out gun emplacements. In fact, we had orders to shoot at everything that moved—but just how that came to include ducks takes a little explaining.

Now, perhaps I should explain that a destroyer skipper sometimes has time on his hands. After having been in command for a year or so, the skipper who does everything himself isn’t worth his salt. It’s a tradition on small ships that the officer of the deck be a capable seaman. A youngster in his early twenties, a year out of college NROTC, has more authority as a destroyer O.O.D. than a Naval Academy graduate, class of ’38, would have on a battle wagon. Happy is the destroyer skipper who, after a year’s supervision, can boast four young officers who can get the ship underway, take it in and out of a harbor, and fight the ship if need be. Then his job becomes one of supervision, and most of his hours are spent sitting in the “Old Man’s” chair on the bridge, troubleshooting only when necessary.

By the time the O’Bannon arrived in Wonsan for her bombardment mission, I had been gently but firmly kicked upstairs by a bunch of very capable gents who, a year earlier, had been (a) a paint-and-dye salesman, (b) a junior executive in an advertising firm, (c) a school-teacher, and (d) a filling-station operator. So I’d sit in my chair on the bridge and stare at the enemy shore for targets, or walk up and down the bridge and swap jokes with the signalmen and lookouts.

One morning the port lookout, a hawkeye who got his early training hunting squirrels in Tennessee, gave me an idea. “Cap’n,” he said, “I’ve been starin’ at this water for three days now and haven’t seen a mine yet, but them gol-dern ducks are gettin’ on my nerves. Every time I see a dot on the water and get ready to yell ‘Mine on the port bow,’ it just shakes its tail and flies away.

“Now,” he continued, “ifn I had my ol’ 12 gauge shotgun, I’d fix those ducks and make this a decent place for a seagoin’ destroyer.”

The only shotguns a destroyer carries are the sawed-off riot guns that the landing force takes ashore; the only ammunition is 00 buckshot. A man might as well throw rocks as try to hit a duck with a combination like that.

Yet on every destroyer bridge you will find a rifle—either an M-1 Garand or the old faithful Springfield. It’s kept handy for sinking mines or any floating objects that resemble mines. The Japanese net floats that drift around these waters have added gray hairs to most destroyer men. I have sunk over a dozen in the past month. Mines can be taken care of nicely with a Springfield—they either sink or explode after a few well-placed hits.

By the time we started our bombardment mission, I had become the official ship’s sniper. Any tin can, box, net float, or plane belly tank that floated by was fair game. It was a useful thing to do, for when I sank each offending object that resembled a mine, it made the chances of spotting the real thing that much greater. And don’t think that we who ride these waters with only a half-inch steel plate between us and Davy Jones aren’t mine-conscious.

“So,” I said to myself, “these ducks are bothering my lookouts and detracting from their efficiency. By golly, they’re actual hazards to operations.”

It didn’t take me long to figure that they were official targets for my Springfield.

“Operation Duck Hunt” got underway immediately. I bagged three birds the first day at ranges of about 100 yards, but they were (shame!) sitting.

Now I’m not one to sneeze at shooting a sitting duck so long as I’m using a rifle and the range is long enough to give him a fair chance. But my friend from Tennessee would snort his displeasure.

“Sittin’ ducks!” he’d mutter, just loud enough for me to hear. “The Old Man is out of line.”

Before I knew it I had a tacit agreement with Tennessee that I wouldn’t fire until the ducks were air-borne. Though it took more ammunition, it was also a lot more fun. After two days’ blazing away I hadn’t hit anything, but the ducks had a new respect for the U. S. Navy.

Since Wonsan Harbor isn’t very big, the O’Bannon was forever changing course, dodging an island here and there, in order to keep the shoreline under surveillance. It also helped to be a moving target in case the Commie shore batteries decided to take a pot shot at the ship. As a matter of fact, vessels had definite instructions not to stop while in the harbor. After missing so many moving targets myself, I could see the logic of that. So as we cruised around we pressed our war against the shore targets quite successfully. But we also had many a spell of quiet steaming between such bombardments.

DURING THESE LULLS my war with the ducks went on. Finally I caught the knack and started to bag them on the fly. Some hits were really unbelievable, and though I know that there was a lot of luck involved, I now fancy myself quite a marksman and am just waiting for my next furlough in South Carolina; if I can get ’em on the fly with a rifle I should be murder with a shotgun.

Anyhow, when our tour in Wonsan was up, the box score was three a-settin’; eight a-flyin’. Now, no sportsman likes to shoot game and leave it, but I had a problem. A 2,100-ton destroyer is no rowboat and doesn’t spin on a dime. As a matter of fact, when you put on the brakes by backing full speed, the ship continues ahead for the length of two football fields before coming to a stop. Besides, I had orders not to stop.

Tennessee came up with the solution. “Cap’n,” he said, “ifn you could mark that duck as we passed by, we could git him the next time around.” That was a partial solution—but it had its shortcomings. First there was the set and drift, as we in the Navy call the effects of wind and current. In half an hour a floating object in Wonsan Harbor drifts about 500 yards. It took the O’Bannon a good half hour to retrace her steps as she patrolled the harbor. But even if I could bring the ship to the duck, how was I to retrieve it without stopping?

A boatswain’s mate remembered a sort of trout net that was stored in the forward hold, so he rigged it to the end of a boat hook. This provided a good ten-foot reach, which wasn’t worth a hoot from the fo’c’sle, where the deck is twenty feet above water. But it was adequate back on the fantail, which has only about eight feet of freeboard.

So we worked out a plan by which we retrieved nine out of eleven ducks. When I bagged one I’d yell “Mark, 100 yards on the starboard beam.” The quartermaster would take a quick bearing, plot in the ship’s position, and, 100 yards from our track, make a circle marked “Duck.” On our next time around the harbor we’d allow for the duck’s drift through the water and steer for his predicted position. When we sighted the duck we’d bead right for it, and when it was about fifty yards dead ahead, we’d put the ship’s rudder hard right (or left) and throw the fantail up against the carcass. The stern lookout would nonchalantly scoop it up in our trout net. Then we’d steady up and continue our bombardment of the shore.

Simsuango, our Philippine steward, is a master cook, but he almost went over the hill when I asked him to cook those ducks. They smelled to high heaven and refused to react to roasting, stewing, frying, or any other cooking procedure. After a bout with one of those stubborn creatures, Sim would wash his hands in a mixture of water and lemon juice, and report sadly that he had thrown the duck and pan over the side. So no matter how I boasted that I was reducing the wardroom mess bill with my hunting prowess, a much anticipated duck dinner never materialized.

However, Ed Brandhorst, the ex-school-teacher, is happy. His dad mounts birds as a hobby and, according to Ed, has a wonderful collection. Ed skinned each different species and has the skins carefully stowed in the ship’s freeze box. “Wait till the folks in Denver see these,” he gloats.

I have one great satisfaction from Operation Duck Hunt. Last fall a friend of mine kept his destroyer at the Wonsan bombardment line so long he started calling himself the “Mayor of Wonsan.” Since then every destroyer skipper has been trying to outdo that publicity hound. Yesterday I fixed his wagon. I sent him a picture of myself standing on the bridge in a Teddy Roosevelt pose-duck in one hand, rifle grasped nonchalantly in the other. I autographed it “Fish and Game Commissioner, Wonsan County.”