The Freezer of Horrors 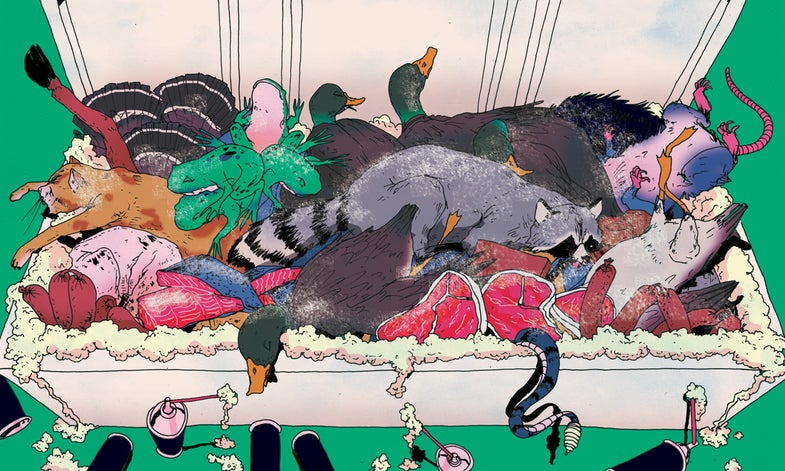 Bates lived next door. He was a passable wingshot and an exceptional barbecuer, but he was a hoarder without equal. The codger possessed umpteen damaged decoys, rods, old skiffs, bullet-riddled road signs, fouled fishing plugs, shotgun hulls, and piles of other junk.

It was his new taxidermy obsession, however, that nearly did him in. He’d started not because of any talent for making dead animals look alive, but because he was a man who just couldn’t throw anything out.

A couple months back, I busted him stashing a dead possum in the deep freezer under his carport. It was a big white chest, a wedding gift from his father-in-law in ’74. I was cleaning my gutters when I saw him wrestling with it. Empty cans of spray foam scattered the ground.

“I’m upping the insulation so my critters keep till I get around to stuffin’ ’em,” said Bates. “I’ll be a man on Mars if I can shove it all back in.”

He tried to rearrange its contents. Expanding foam oozed from every crevice.

“How much of that stuff did you use?”

“Well, once you crack a can you can’t reseal it,” said Bates, “and I hate to waste any.”

That’s when I noticed the liver-and-white spots of his old pointer, Ringo. I’d always wondered where he’d buried him. And there was the bear hide from our Alberta hunt a few springs back. Plus a few pheasants for fly-tying, one plump raccoon, sticks of summer sausage, a T-bone or two, a feral cat with no more lives, turkey tail fans, a bushel of bullfrogs, and a menagerie of other creatures. I lurched when my hand brushed the tail of a timber rattlesnake.

“Bates, you can’t go around scooping up every roadkill you come across. It’ll come back to haunt you.”

“Just help me seal this thing before Donna gets back,” said Bates.

The sportsman’s code requires aiding a buddy if he’s mired in mud and the creek’s a-rising. So I grabbed a ball of bungee cords. Soon that bulging freezer was battened down like Tut’s tomb.

Later that evening, I heard a bloodcurdling scream. Moments later, sirens blared from Bates’ driveway. By the time I peeked out my window, Sheriff Salisbury had drawn on the freezer.

All the bungee cords had snapped and the lid was off its hinges. I gasped as zombie snakes and birds and sausages slithered about, bubbling atop the foam like a brewing volcano. I heard the horror-film shriek again.

“Shoot it!” yelled Donna, hiding behind her Buick.

A furred creature writhed up from the chest. I recognized the snarling snout of the possum and the hide of the bear. Donna fainted.

“Freeze!” the sheriff ordered the hairy mass. Just then, Bates emerged from the house, wearing a robe and beaver-fur slippers. “What in holy hotdogs is going on?!” he bellowed. Then he noticed his overflowing freezer. Next he spied a small square package wrapped in ancient paper and crusted in ice. Bates scooped it up and held it in the quivering beam of Sheriff Salisbury’s Maglite. It was marked VENISON LOIN—’74.