On Monday a male leopard wandered into the town of Karad, India just before dawn. 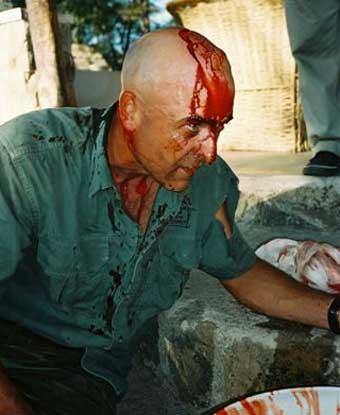 Leopards have always been known for being deadly fast killers, and a wounded or scared leopard is a nightmare for anyone in it’s path.

Recently, that nightmare has turned into reality as two leopards ravaged different regions in India in the last few weeks. On Monday a male leopard wandered into the town of Karad, India just before dawn. It prowled the tops of houses probably looking to steal an easy meal.

Once the townspeople spotted the leopard, they tried to scare it away by throwing rocks and sticks at it. They finally cornered the big cat in an abandoned house and hurled rocks through the windows.

But their strategy only frightened the leopard and soon the big cat switched its mentality from flight to fight. Over a span of eight hours, the leopard tore threw the town attacking six different people.

Finally a police officer was able to shoot and kill the cat as it mauled a man who had just stepped out of a bar. He shot the leopard twice at point blank range as it wrestled with the man on the ground. All of the attacked victims survived.

Just weeks before this incident another leopard attacked a village in northern India in similar fashion. Villagers of Bhawaria saw a leopard roaming their fields so they formed a small mob and tried to scare the cat away with torches and rocks. They cornered the leopard in a patch of tall grass and set the grass ablaze.

But the cat darted out of the brush and started slashing into the mob, scattering the terrified villagers in all different directions. The leopard injured at least seven people (luckily all of the victims survived) before it escaped. The villagers say they now plan to hunt the cat down.

For the story of a leopard attack in the African bush click here.