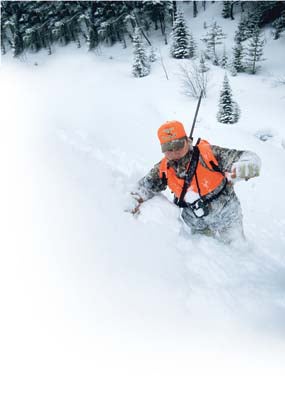 A late-season hunt and early snow–it’s a recipe for disaster. Just ask the hunters who were caught in an avalanche in the Lima Peaks mountains south of Dillon, Mont., on November 15, 1998. One of their buddies didn’t come home from that hunt. When they went looking for their overdue friend, all they found were foot tracks leading into the path of a snowslide, but none coming out.

An extensive search turned up the body the next day, buried under 5 feet of debris. Surprisingly, outside of the area where the avalanche occurred, the snow depth was only about 14 inches on wind-protected slopes.

One of the contributing factors to some tragic avalanche accidents is the assumption that it’s too early in the season and there’s not enough snow on the ground to pose a threat. But avalanches happen every month of the year, so it’s never too early. Before embarking on a late-season hunt in mountainous terrain, contact local authorities to check on avalanche conditions. Follow up by watching the weather forecast; if heavy snow is predicted, reschedule your outing.

The conditions are most dangerous when cold, snowy weather is followed by a warm spell or rain, then more cold and snow. The resulting lubrication between the layers in the snowpack can cause a sudden slab avalanche.

Most avalanches occur when the slope is 30 degrees or steeper, and the risk is highest during, or soon after, an intense snowfall (1 inch or more per hour). So the worst-case scenario would be hiking on or below a slope of greater than 30 degrees during or after a heavy snowfall. However, even if it isn’t snowing, wind can create conditions that are just as hazardous by moving the snow that has already fallen. Leeward slopes, which are protected from direct wind, are especially dangerous when the wind has been strong, and avalanches can occur even when the ground surrounding the snowfield is relatively bare.

The types of terrain that pre­sent the highest potential for avalanche are open leeward slopes, gullies and canyons (even shallow ones), where deep windblown snow accumulates and is preserved by shade. It’s best to avoid these natural snowslide routes.

When possible, take full advantage of safe ridgelines, the windward hillside, dense forests, low-angle slopes or routes that skirt hazardous zones. However, if avoidance isn’t possible, take extra care as you move around in snow country. It all begins with situational awareness.

Look up and examine the hillside; study the tree-growth patterns. If you see what looks like a naked chute descending the slope, where trees are missing or thinner than they are in the surrounding forest, chances are you’re looking at an avalanche path. If you see a cornice (an overhanging shelf of snow) at the crest of the slope, that’s an avalanche just waiting to happen, and there is no way of knowing when it will fall.

Trees can provide some protection during an avalanche, but only if they are tightly packed together. If they are spaced more than about 10 feet apart, you might as well be standing in the open.

If you hunt late in the season in mountainous country, carry avalanche safety gear (see “Avalanche Gear”). Time is of the essence, and you must initiate a rescue attempt while waiting for help to arrive. Essential avalanche equipment includes a transceiver, lightweight shovel, pole probe and colored fabric panels to use as markers and signal panels.

If you’re caught in an avalanche, use a swimming motion to try to ride on top of the snow. Attempt to swim toward the edge of the slide. If the snow is moving slowly, try to catch hold of a tree without getting creamed by it. In a fast-moving slide, try to avoid hitting, and being injured by, stationary obstacles; concentrate on swimming on top of the snow.

When the snow stops moving, it will quickly turn cement-like. Keep your mouth closed, so it doesn’t fill with snow. In the final moments of the slide, make every attempt to work your way to the surface or at least move your arms and legs to try to create an air pocket around your head and body. If possible, shove one arm toward the surface and move it around to create an air shaft.

If you are totally buried, and the snow settles hard, you will be trapped and unable to move. Panic will threaten. Your exhaled breath will melt the snow around your face and the snow will refreeze, creating an ice barrier that will make it hard for you to breathe. Fighting against the snow will sap your energy and cause you to breathe harder, so try to relax and save your energy. If possible, use your hands to carve out a space around your head so you can breathe more easily. Exercise your best judgment about expending energy in an attempt to dig yourself out. Work methodically to avoid total exhaustion. The temptation to begin shouting for help will be almost overwhelming. But wait and conserve your breath until you hear searchers above you.

A late-season hunt and early snow in mountainous terrain can be a deadly combination. But if you know how to recognize and avoid the hazards, you can survive in avalanche country.

■ Don’t travel alone. If there is trouble, the more people on hand, the better.

■ When traversing a potential avalanche path, cross one person at a time.

■ When traveling up or down a slope that presents a potential avalanche hazard, stay to the side of the snowfield as much as possible.

If the snow begins to slide, the snow along the flanks might move more slowly and allow you to escape.