Without question, the month of April can be an action-packed period for longbeard addicts and serious bass anglers. It’s also... 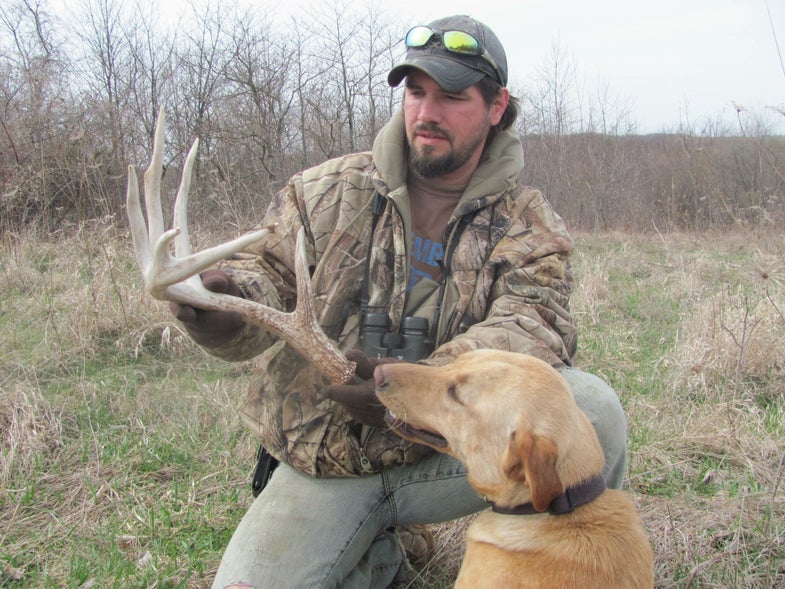 Without question, the month of April can be an action-packed period for longbeard addicts and serious bass anglers. It’s also tough not to think about those saucer-shaped crappie right now. However, many whitetail fanatics are still combing the woods for massive sheds and hotspot stand locations for next season.

For example, Owen Miller from the big buck state of Ohio has been extremely busy scouting and planning for the upcoming fall. Diehard hunters like Miller know that one of the best times of the year to pinpoint and pattern a Boone & Crockett buck is during spring.

As you can imagine, Miller basically lives in the woods throughout the post season searching for that ivory-white gold.

In fact, he practically hit the antler lottery just the other day when he found a massive 6-point shed that would measure well over 76 inches. Miller is now on a mission to find the missing left side of the potential Boone & Crockett bruiser.

The scary thing about this particular buck is that it’s probably only four years old. If all goes well, can you imagine what this top-heavy beast will look like by the time October rolls around? Under the right conditions, a really nice four-year-old buck can transform into a jaw-dropping monster between his fourth and fifth year.

Owen is hoping that another year to grow and mature is all this buck needs to break into the books.

Consequently, just hearing about a wall-hanger of this caliber makes me want to throw my turkey calls down and start shooting my bow.

Unfortunately, the opening of archery season is still many moons away. On the bright side, there are still some things we can do to help pass the time and fight the uncontrollable urge to grunt, rattle and roll. To ease the pain, try visiting one of your favorite big buck stomping grounds over the next few weeks. It’s the perfect time to locate travel routes, bedding areas, staging points and last season’s rub-lines.

Who knows, you might even stumble upon a giant pair of long-tined Booner sheds just like Owen Miller. At any rate, be sure to let us know on the BBZ what you’re seeing and finding in your neck of the woods.