The rut is knocking on the door. The time is near. Bucks will run willy nilly across the landscape and those reclusive giants will wander in search of does. Or will they? What if everything we think we know about mature bucks (or much of it anyway) isn’t quite as it seems. Well, that just might be the case. Researchers are learning more about mature bucks every year. And with that research comes some serious myth-busting. Here are 10 myths about mature whitetail bucks. 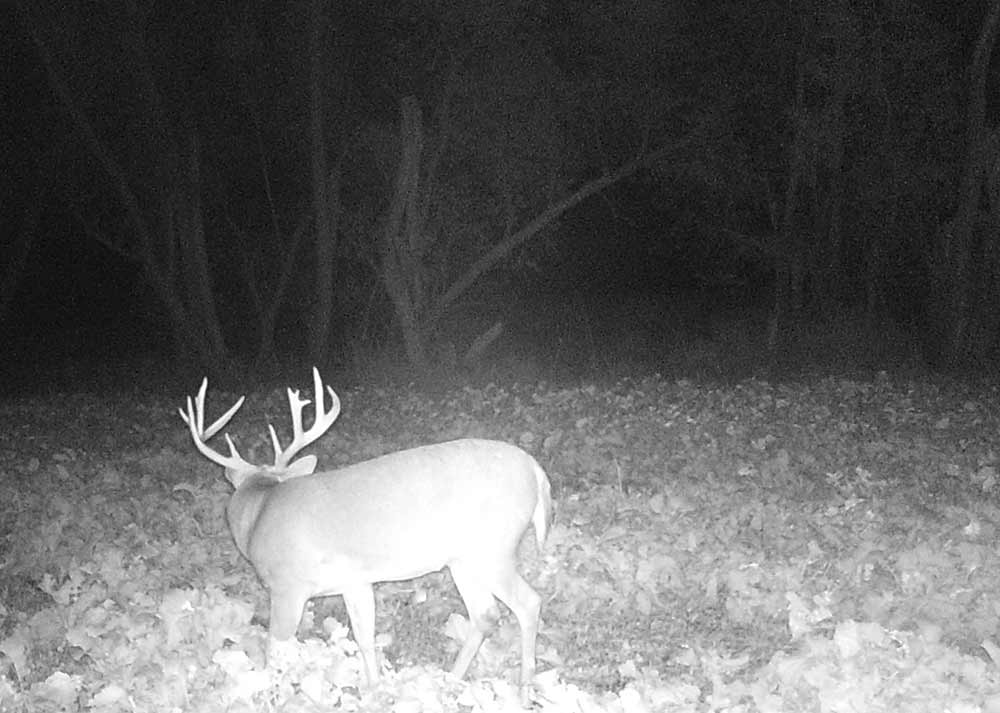 Myth 1: Mature bucks are more active midday during the rut

This is not entirely false. According to multiple GPS-aided research projects, bucks of all ages do indeed increase movement throughout the early stages of the rut. Thus, by default, they will move more at all periods of the day than at any other time. But that research was also very clear: The peak periods of movement fall during the first and last few hours of daylight. So why are all those stories of midday giants being killed during the rut? Well, I don’t have any science to back up my theory, but the logic is sound: we take vacation time during the rut. We know bucks are active. Thus we spend many more hours in the woods, including all-day sits. More hours on stand during midday means more big bucks killed during midday. 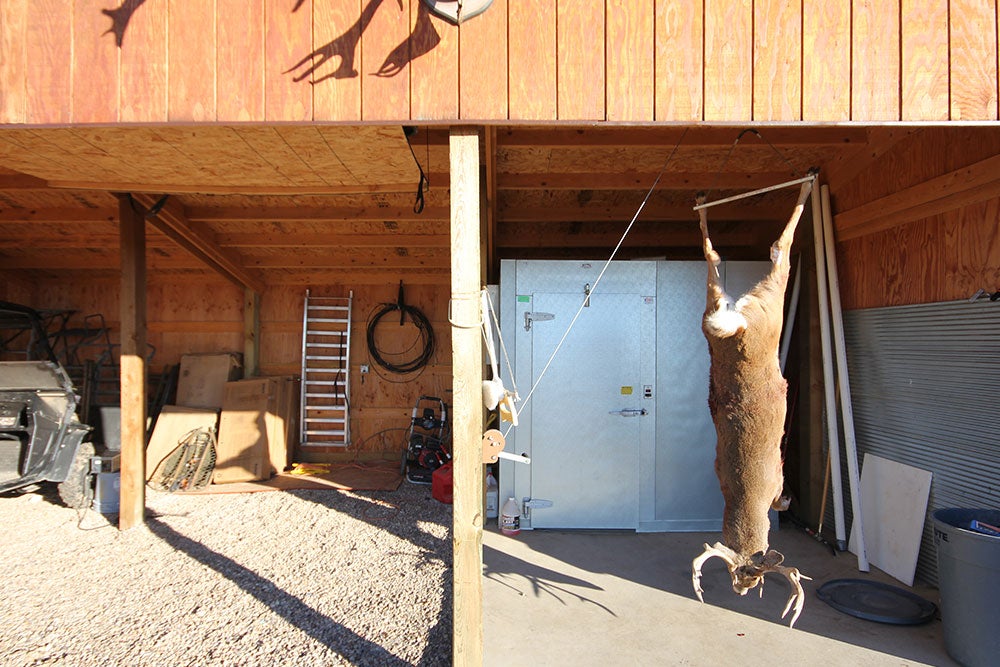 Myth 2: Bucks will cover plenty of ground during the rut

Not all bucks go roaming during the rut.

Some bucks will cover many miles and GPS studies prove it. But those same studies also show that some bucks have very small home ranges and those home ranges decrease in size as the buck ages—regardless of the time of the season. Bottom line: Every buck is unique. They each will cover the amount of ground that they choose to cover. Some love to walk. Others not so much. 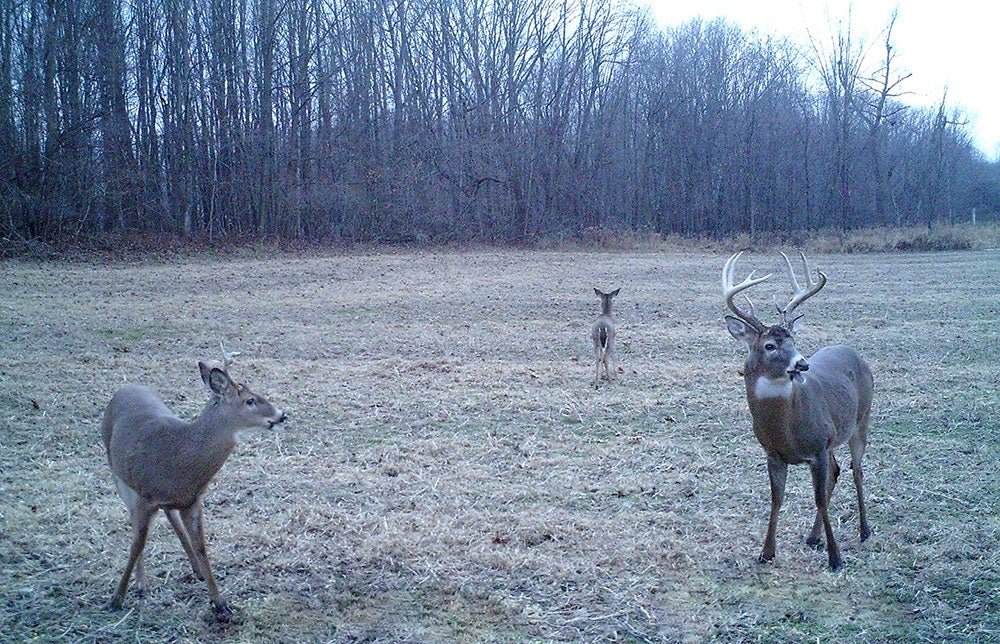 Myth 3: A dominant buck will “control” the best area of a property

A trail cam shot of a mature buck and some does.

Nope. A dominant buck will likely cover that area in search of hot does, but so will many other bucks in that area, including sub-dominant bucks and roamers that could potentially knock the king off its throne. The takeaway here: Hunt the best doe bedding areas you have at your disposal and you’ll likely encounter multiple bucks, including some mature ones. 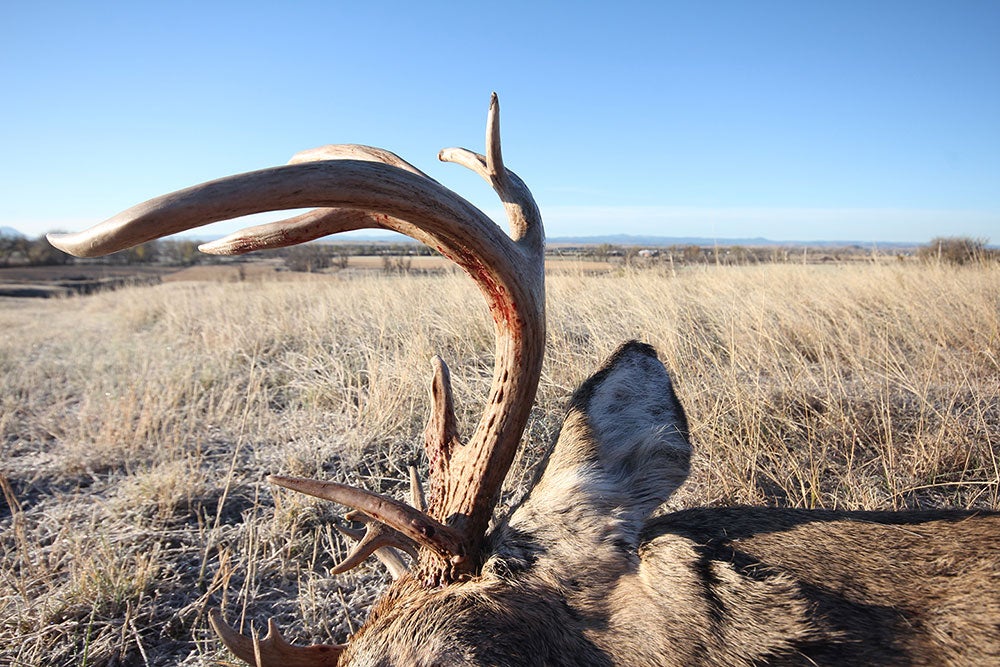 Myth 4: Mature bucks are “here today, gone tomorrow” during the peak of the rut

Research shows that mature bucks often stick to their home range even during the rut.

This is one myth I used to prescribe to pretty heavily. And, it’s absolutely false. Researchers in Texas recently found that some bucks covered about a third of their total home range and revisited two or three key locales within that range once every day or so. What does this mean? If you see a mature buck, whether the rut is cranking or not, stick it out. Research has shown that buck will likely return on a regular basis.

Myth 5: Mature bucks track hot does by their urine

This is disgusting. And false. It’s not the pee they’re sniffing…it’s the pheromones excreted in that urine and from the doe itself. Researchers have hardly scratched the surface when it comes to all of the ways in which whitetails use scent to communicate, but it’s likely that a combination of pheromones as well as interdigital gland secretions (located between the toes on a deer’s hoof) play a big role in getting those bucks to walk nose-to-the-ground. 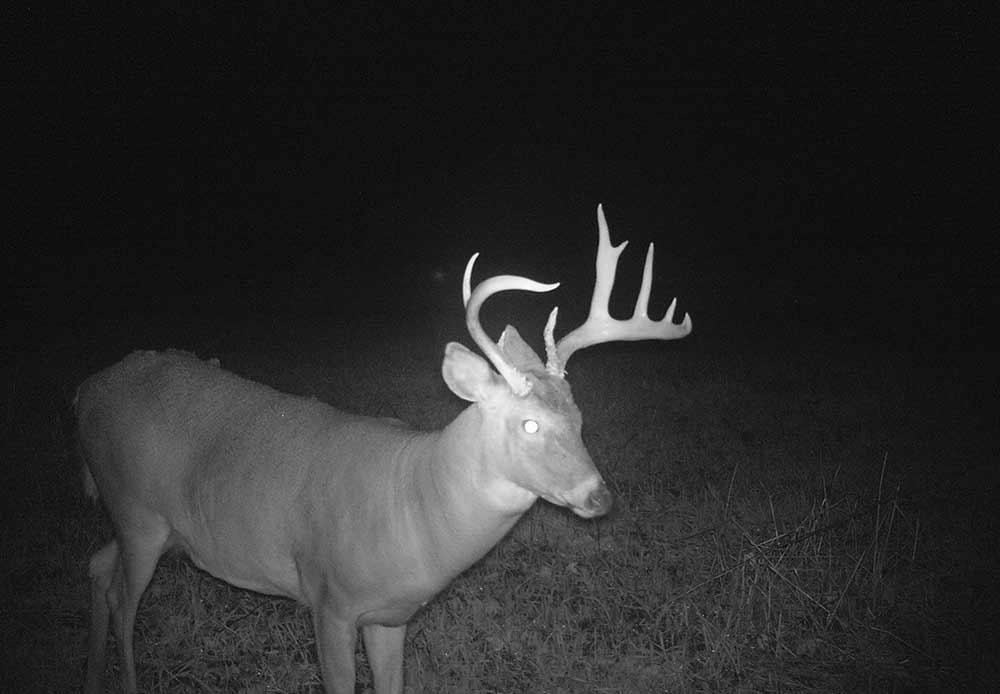 Myth 6: I’m not hurting anything by hunting hard

Mature bucks respond to hunting pressure, and do so in a hurry.

This is a fine line and a fickle myth. But the consensus, based on research, is that bucks do respond to hunting pressure and they do so in a hurry. One interesting study reported in a Quality Deer Management Association presentation found that one hunter per every 250 acres had minimal impact on deer movement. But when that ratio climbed to one hunter for every 75 acres, bucks headed for thick cover. 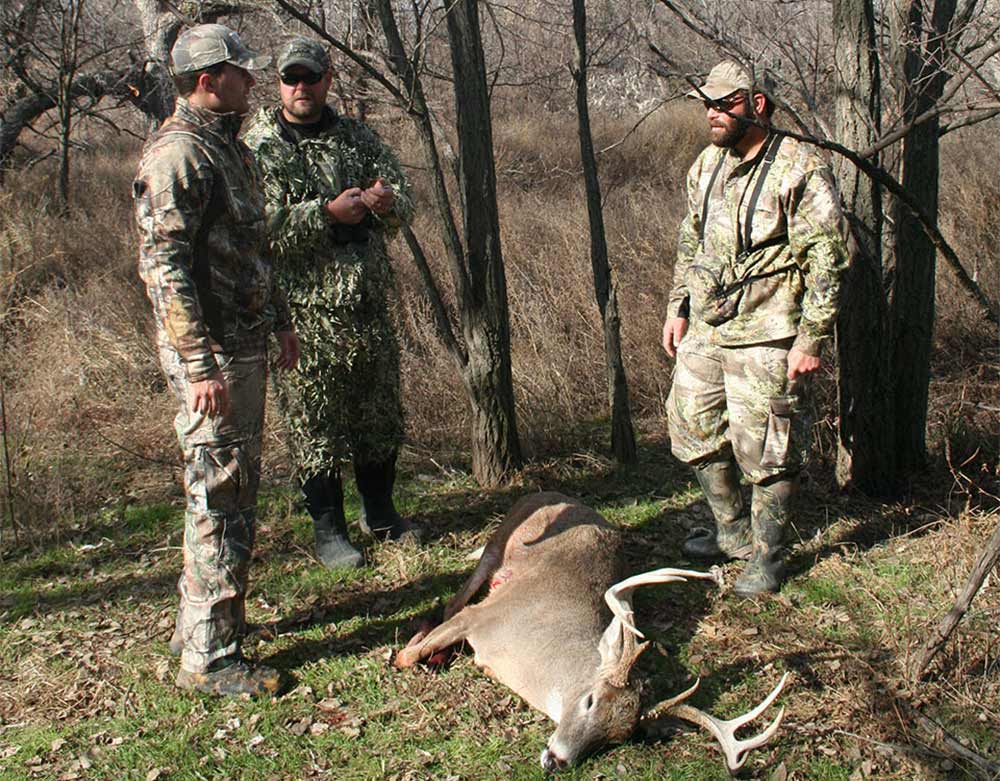 A stud buck taken during a morning hunt.

This is a tough pill to swallow but the research (which comes from all manner of sources across the whitetail’s range) says that weather doesn’t have a major impact on when deer move. They will still move most during the first and last hours of daylight. That movement may be more intense, but it will still occur most during those periods.

Myth 8: Mature bucks will rut earlier (or later) based on weather conditions and/or moon phase

This is a myth that continues to perpetuate throughout deer camps even though we know very clearly that it’s simply not true. Researchers have an iron-clad method for determining the timing of the rut. They simply measure gestation period and record when fawns are born. They then backdate to find a very accurate date of conception. And those dates, essentially without fail, occur at the same time each year. Regardless of weather, moon phase, or any other factor. 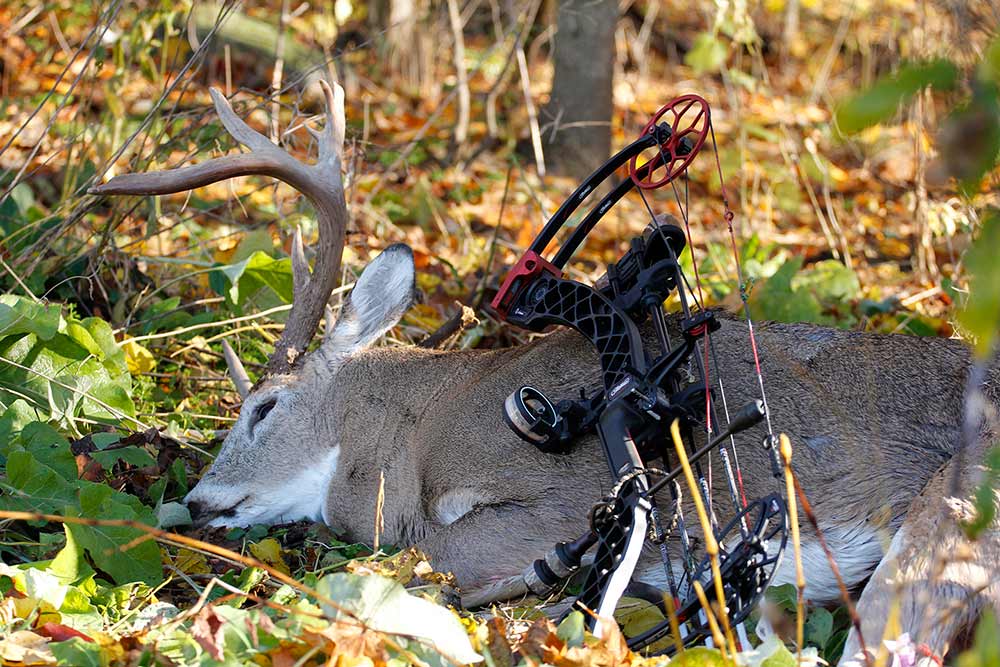 Myth 9: Mature bucks live where they live all year long

It’s time to rethink the concept of a buck’s “home range.”

This is a myth I debunked myself long before I saw the research out of Maryland’s Chesapeake Farms. There, researchers collared 18 bucks and recorded their movements. The findings: Many bucks had established summer ranges as well as fall ranges, and some had different ranges yet during the rut. This explained a lot to me as I would seldom get trail camera images or have actual sightings during the spring and summer of bucks on the area I hunt in Michigan. Then, around mid-October, the place would come alive with antlers. 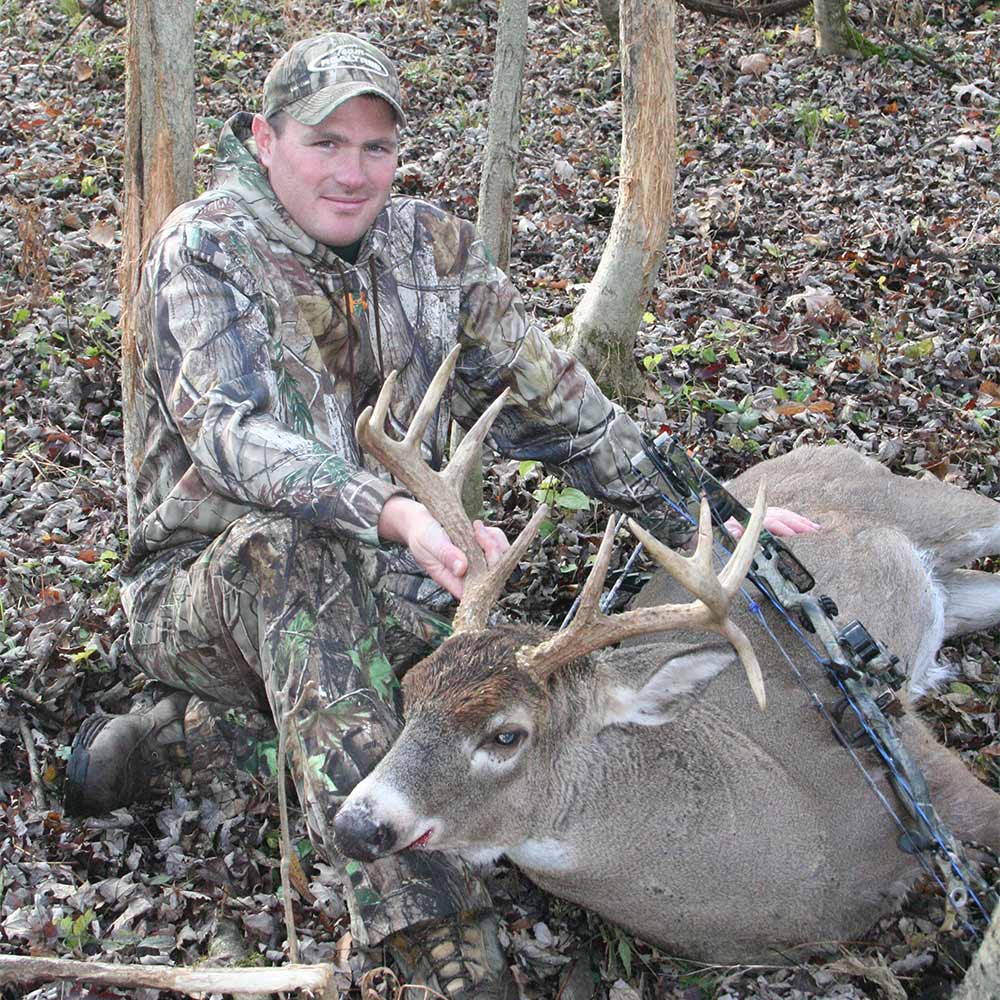 The author with a drop-tined archery buck.

This is not entirely true…nor entirely false. A study conducted in Pennsylvania by Penn State University found that while bucks did indeed react to hunting pressure, they didn’t always simply vacate the habitat altogether. In fact, many of the bucks didn’t move far at all. What they did do, however, was change elevation (the study was done in fairly hilly terrain) or habitat type. The theory is that these deer simply moved to places that allowed them better vantage points. And then they simply laid down and watched the hunters move around them.