How to Study Late-Season Scrape Lines to Find Big Bucks 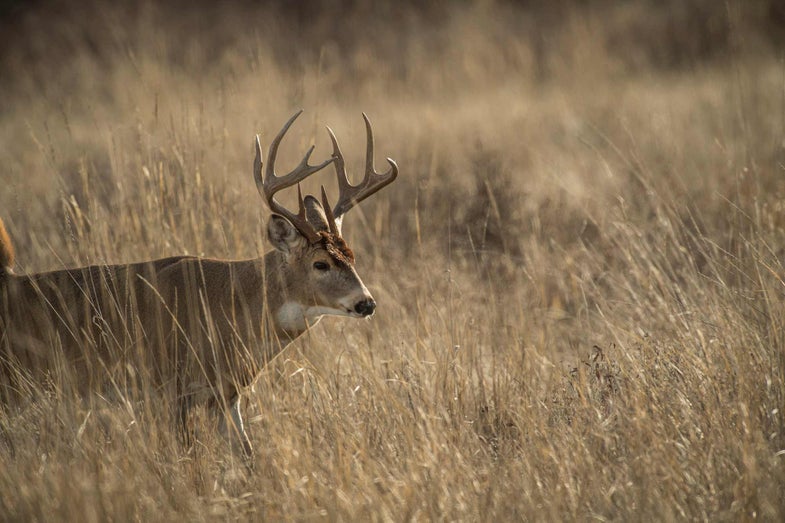 If there’s one tactic I’ve found most productive when patterning mature whitetail bucks, it’s to check and monitor scrape lines. Just before the rut, bucks begin prowling areas in a somewhat predictable manner and leave or refresh their mark on the ground and on the tips of tree or bush branches. They’re not actively seeking does in heat, but they’re certainly getting ready to, and often begin to make their rounds during daylight hours instead of under the cover of darkness. The good news is this phase doesn’t happen just once a season, but twice—and it’s about to happen again right now.

I encountered the first scraping phase earlier this year during a late October hunt in Kansas. I knew it was a bit premature for the rut to really be cranking. I also knew I had my work cut out for me. Not only was I hunting public land, I was hunting land I never saw before. I logged plenty of hours staring at OnX maps in the months leading up to the hunt and I zeroed in on several promising areas, so once I put boots on the ground, it didn’t take long to see some pre-rut patterns. There were scrapes everywhere, and it was pretty obvious bucks were working the area on a regular basis.

The problem was knowing if mature bucks hit the scrapes during daylight hours. That’s the frustrating part about any “scrape period” of the rut. Does aren’t in heat, but that reproductive window is quickly approaching and mature bucks know it’s about to happen at any time. That’s what persuades nocturnal bucks to continue moving later in the morning, or earlier in the evening, and why they make so many pit stops at scrapes.

I placed stands in areas with active scrapes and thick bedding cover that was well away from food sources. I knew the bucks would visit agricultural fields, but they would likely leave the fields well before daylight and not visit again until after dark. By positioning myself near bedding cover and active scrapes, I improved my odds of catching a buck on its feet during daylight.

Fortunately, it worked exactly as planned and I killed a 4-year-old buck on the second morning. A day later, I was sitting with my dad as we watched a 160-inch class buck work a scrape line that lead to a primary bedding area. That buck didn’t present a shot but we knew we were in the deer’s home turf. The next evening, my son encountered a world class typical that was checking a scrape about an hour before dark. Our entire hunt wasn’t filled with fast-and-furious rut action, but we saw some of the most impressive mature bucks of the season—and the window for it to happen again is approaching fast.

With the peak of the breeding season slowing down in most parts of the country, the window for scenarios like the ones I experienced on my late October hunt is about to open again. While the action may not be quite as intense thanks to the fact most firearms seasons are either underway or wrapping up and there are likely less deer around, studying and monitoring scrape lines remains an excellent way to pattern a late-season buck.

Does that weren’t bred during the initial November rut and some doe yearlings cycling for the first time go into heat again about 28 days later, and bucks will begin to hit scrape lines in anticipation of this “second rut,” which can continue for some time. I’ve had good luck hunting scrape lines in December when I can find them. Just remember, this isn’t something that happens every year, and it might not seem to happen at all if your area lacks a fair population of mature bucks. Like in October, the key is focusing on scrapes that are near bedding cover. Towards the end of the hunting season, bucks tend to be reluctant to hang around field edges in daylight, even more so than in October. You may find some hot, active scrapes along primary food sources, but odds are bucks will only visit those scrapes under cover of darkness. If a buck is making scrapes along field edges, there’s a good chance the same deer is also working a scrape line closer to its bedding area.

Find that scrape line and you’re in business.