How to Hunt Deer in Standing Corn

Standing cornfields. From the outside, these towering, vegetative metropolises appear impenetrable, as if guarded by Area 51 razor wire. Hundreds... 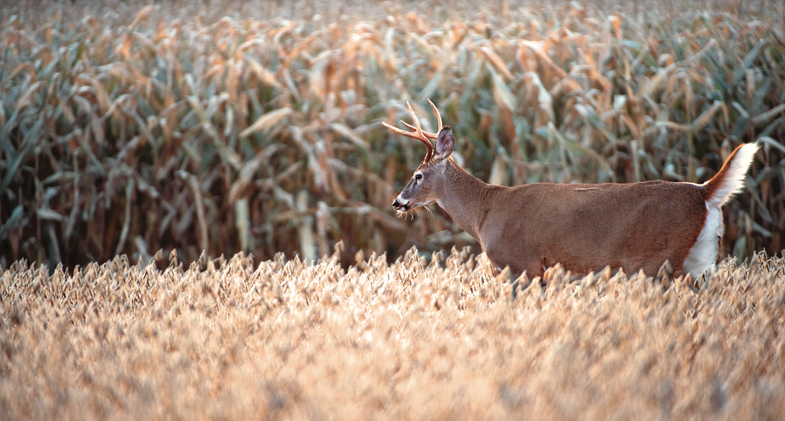 Standing cornfields. From the outside, these towering, vegetative metropolises appear impenetrable, as if guarded by Area 51 razor wire. Hundreds of acres of planted jungle allow whitetails to disappear in a single bound. And just try to invade this sanctuary on the wrong day. Crispy, crinkling corn leaves will give away your position with every brush of your body.

But don’t turn your back just yet on the cornfields that make up much of whitetail territory. It may be the only property you have access to hunt. And in years of bad weather, when harvest is delayed, cornfields could provide deer with refuge on every section of land. Mother Nature may force your hand and make you hunt the stalk wonderland.

When whitetails have hundreds of acres of corn at their disposal for evasion, they’ll take corn over timber every time.

To find success in cornfields, you can’t simply barge right in. It takes a thorough study to reveal weaknesses in a whitetail’s cornfield fortification. First, start with a Google Earth map—or better yet, use hunting programs like ScoutLook Weather (scoutlookweather.com) that provide wind map overlays and allow you to mark stand locations for future reference. Remember, the satellite images are dated, but seeing the ground without crops or after harvest is what you’re after. You want to see all the terrain features. Look for lowlands that may be difficult to plant due to abundant moisture or wetlands too large to drain. Whitetails may browse, lounge, or bed in these depressions. Grassy waterways that channel out of the field can also provide paths to quietly and quickly access the field’s interior.

As you peek down from the clouds, be especially alert to interior or edge trees capable of holding a treestand. Lone trees or small clusters are oddly compelling to whitetails, increasing the chance you’ll get a passing shot. Plus, you’ll also find trees in areas of a field deemed too difficult to plant, which puts them in edge-like locations. Refer to your favorite hunting textbook and review the phrase “whitetails are creatures of the edge.”

Another common feature found within cornfields, which dates back to the era when farmers concurrently ran livestock, is the presence of a reservoir. It could be lined with trees, but it will attract whitetails regardless of whether it holds water. But if it holds the only water in a square mile of corn, you’re looking at a hotspot. Whitetails require up to 4 quarts of water a day, depending on their weight and the amount of vegetation they are digesting. Rutting bucks require even more than that to make it through the fall.

The Yellow Rowed
What if your cornfield option doesn’t have a tree in which to perch?

Fortunately, cornfields have an abundance of cover. First you want to don corn-color camouflage. Patterns like Mossy Oak’s Shadow Grass Blades or Brush blend in nicely with November stalks, so take your pick. Then choose a location downwind of where you anticipate action and hunker in the edge. You can simply pull a few stalks down, creating a crisscrossing pattern of corn to veil your form. (Be careful not to damage the crop.)

You can also stake a blind in the interior, but as with any whitetail setup, it’s best to place it a week or more prior to using it so wary deer get comfortable with its presence. Brush it in with stalks that have already fallen (again, don’t damage the crop). And be sure to place it where it won’t end up in the guts of a $400,000 John Deere combine.

If the field doesn’t exhibit interior openings, you’ll be forced to hunt on the edges. Embrace the edge favoritism of the whitetail lifestyle. Dawn and dusk give you the best windows of opportunity to ambush a whitetail here. You may have to hunker in a fence line, cower in an end row, or position yourself in a ground blind. Whitetails leisurely nibble spilt corn on edges. Look for end rows that have been harvested and then focus on where grain loading may have taken place, which would leave the scraps that whitetails love. Avoid areas with too much spilled grain, as some states consider that baiting.

Finally, you may want to pack a lunch, especially if you’re hunting interior openings. The dense surroundings give whitetails a sense of confidence.

You’ll still see whitetail activity before sunrise and after sunset, but here you’re just as likely to tag a buck at midday as during prime-time hours.

Corn does create a challenge if it is left unharvested during hunting season. But don’t let it give you a headache. Study the obstacle and you’ll discover a chink in the armor of a cornfield-loving whitetail.