7 Best Ways To Use Scents During The Rut

How, where, and when to fool a mature buck with deer scents and mock scrapes this season 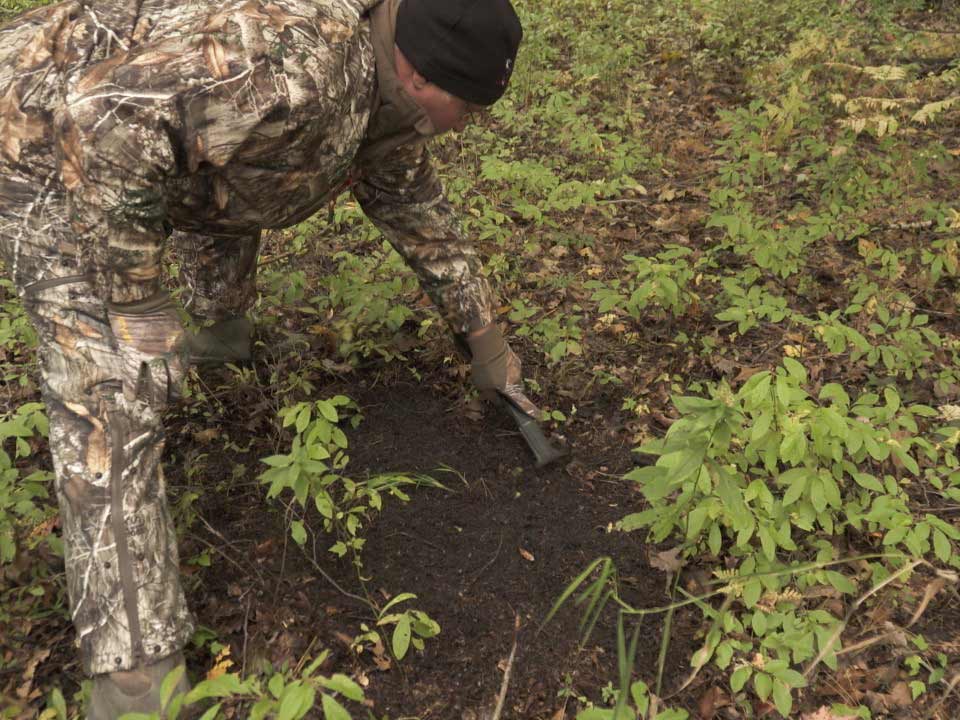 Hunting over deer scrapes has been a hotly debated strategy in camps across the country for decades. While some hunters barely give scrapes a second look when passing them by through the woods, others take painstaking steps to set up mock scrapes in multiple locations from early September right through late season. Regardless of what side of the argument you might find yourself, the odds of killing a buck over a scrape are small. However, according to deer hunters such as Doug Roberts from Conquest Scents, they are high enough that deer hunters should always build mock scrapes near their hunting blind or stand.

“There is no question that a lot of scrape activity happens at night,” says Roberts. “But when the rut kicks in, bucks are on their feet a lot during daylight hours and will often visit some scrapes during that time.”

Indeed, scrape hunting has paid big-buck dividends often enough to make it a viable tactic from September through December….Here are seven ways to raise the odds during the whitetail rut.

Although the prime time to hunt over scrapes is limited, Roberts believes that mock scrapes should be made long before the rut.

“Typically, the best scrapes to hunt are made in the same places every year,” says Roberts. “Often these annual scrape locations are near bedding areas or transition zones. I like to make mock scrapes in September before other dominant bucks are thinking about scraping. I like to set the tone and build a scrape near where my stand is instead of trying to put a stand near a scrape a buck made. I make my scrapes early and start using scents early so my scrapes are active very early in the season.”

Don’t panic if you’ve missed the boat this season. In areas where scrapes typically appear each year, mock scrapes can still be effective in November and through the second rut.

There are two reasons Roberts believes that mock scrapes often fail: Too much human odor is being left in an area, and the mock scrape doesn’t look authentic.

“Presentation is often the key to success,” he says. “When hunters make scrapes, they often just scrape in one direction and call it good. When a buck makes a scrape, however, he throws dirt in all directions, which makes the scrape more noticeable. This type of scrape is what I like to call a territorial scrape or a sex scrape. It is a scrape that does will use. When I am done making my scrape, I make a licking branch and then make several rubs around the scrape. The deer in the area see the rubs in the distance, which will bring them in. Then they will see and smell the scrape. I put RuttingBuck in the scrape and our EverCalm scent on the licking branch. (Check local hunting regulations before using deer scents.)

Robert’s favorite scent strategy is to make sure that every time he approaches his stand, he tries to reduce the chances of detection by spraying his boots with EverCalm.

“EverCalm is a scent product that is collected from deer bedding areas on our farm,” he says. “Deer are accustomed to smelling a lot of different deer in and around bedding areas. By leaving fresh bedding area scent by my stand and scrapes, it makes my setup smell more authentic. It’s designed to help calm deer down if they are a little spooky when they approach.”

One issue many people have with using bottled deer scent when deer hunting is not knowing how old the scent in the bottle actually is. Scent that smells like nothing more than ammonia can sometimes spook deer. Andy Whitcomb from Whitcomb’s Whitetails believes he has solved the problem. He owns a small herd of whitetail deer and sells frozen deer urine every year.

“We bottle our scent when the bucks are rutting, and the does are in estrus,” says Whitcomb. “We freeze it right away, so it is frozen fresh. The longer urine is left on a shelf or sitting around somewhere in the heat, the more it smells like ammonia. It doesn’t smell natural, especially during the rut when it is cold outside. We thaw our urine the day before we plan on hunting or on the day of the hunt. The urine smells fresh, and in the wild this time of year, urine that is left in a scrape is freezing and thawing as the outside temperatures rise and fall. What many hunters don’t realize is that deer regularly eat and lick urine from other deer. If the urine doesn’t smell or taste fresh, deer will often get spooked or just ignore the scrape. When deer walk up to one of my scrapes that has freshly thawed scent in it, they typically eat it and curl their lip. Using fresh scent is the easiest way to attract many deer to a mock scrape.”

Wisconsin’s Steve Bartylla is a writer and land manager who grew up trapping. It’s precisely those trapping skills, he says, that have helped him tag mature bucks.

“I wouldn’t put a muskrat trap in the middle of a field and expect to catch a muskrat’” says Bartylla. “Many hunters put scrapes and doe-scent drags in areas bucks don’t regularly frequent. The key to success is putting a scrape and doing a drag in an area that a buck wants to be. One of my favorite tactics is to build mock scrapes near doe bedding areas, and use scent drags. I’ll use scent drags mostly on the downwind side of doe bedding areas. During the pre-rut and rut when bucks are searching for hot does, they will be hanging out near bedding areas. I put scent where the bucks already want to be, which is the key to success. I typically freshen up the scent every 10 to 15 yards because as the buck approaches my stand, I want the scent to be stronger and stronger until he walks right into my shooting lane.”

Shane Mowery, the host of Bone Maniacs, regularly travels throughout the Midwest in search of big bucks. He likes using game cameras and scents as a tag team.

“I like to make mock scrapes early and let the deer take them over,” says Mowery. “When the bucks and does have taken them over, I stay away from the area as much as possible. I believe people visit their scrapes too often, which is often why bucks shy away from scrapes. Once my cameras are telling me that the bucks are hitting the scrapes almost daily, I start going in every other day and putting scent down. I like using Tink’s Black Label. By only visiting the scrape during the peak of the rut and by putting out a ton of scent during that time, I have been able to kill a lot of bucks during daylight that typically would be nocturnal. The increased amount of scent left in the scrapes drives them crazy.”

It is important to note Mowery also cuts a patch of hide and gland from the forehead of every buck he kills. He freezes it and uses it on his licking branches. He believes it adds a touch of authenticity that creates even more activity around at his scrapes.

One thing all the scrape guru’s have in common is they are obsessed with making sure their scrapes are authentic and free of human odor. Scent companies have taken notice. Almost every well-known scent company now offers some type of dispersal system that allows the hunter to put out scent without having to regularly visit the mock scrape or even get near the scrape.

Code Blue Scent Sticks—Code Blue has a Synthetic Doe in Estrous, Scent Stalks that is impregnated with synthetic estrous scent that can be hung near a scrape or licking branch. The scent will reportedly last 8-10 days. Hunters can hang it and walk away.

Conquest Evercalm Bomb—EverCalm scent from Conquest Scents has been around for a long time, but now it is available in an aerosol can. It is called the EverCalm Bomb. It can be sprayed on the ground, at head level, at a scent trail, or it can be released all at once as a scent bomb filling the air with the calming scent of a herd of deer bedded in the area.

Tink’s Buck Wild Pads—Tink’s is one of the oldest names in deer scent. They continue to offer exciting new products. This year they have a new product called Buck Wild Pads. These pads can be hung from a tree, on a decoy, or in a shooting lane and are Pre-moistened with Tink’s #69.

Wildlife Research Center Magnum Dripper—The Magnum Dripper from Wildlife Research Center has been around a long time and is still extremely popular. Steve Bartylla uses the dripper each fall with Special Golden Estrus urine. The dripper can be filled with four ounces of urine, and it will drip only during daytime hours. One filling will last several weeks, so the hunter doesn’t have to regularly visit the scrape, potentially spooking deer or leaving human odor behind.

Whitcomb Whitetails Frozen Scent—Whitcomb Whitetails frozen urine is quickly bottled after collecting it in the fall and shipped almost immediately. Unlike other scents that are months or even years old when they are purchased, Whitcomb’s urines are super fresh. Whitcomb’s offers Doe in Estrous, Dominant Buck, and Individual Buck Scent. Whitcomb has a limited supply each year.

Wyndscent 2.0—Vaporized deer scent is a new technology that was recently brought to the market by Wyndscent. The Wyndscent 2.0 vaporizing unit heats up the scent and dispenses it into the air. Vaporized scent was recently tested by bloodhounds, and the dogs could actually smell the vaporized scent several hundred yards away. One scent cartridge will last up to 120 hours of run time in the field, making this unit a great option for hunters who spend a lot of time in the field but don’t want to spend a ton of money on scent. The unit comes with a remote control that can operate the unit up to 30 yards away, which greatly reduces the odds of the hunter leaving human odor near their shooting lane. Cover scents, deer scents, and elk scents are available.

Editor’s Note: Although researchers have not yet found a proven connection between the spread of CWD and urine-based deer scent products, CWD prions have been found in deer urine. Ensuring that deer scents come from CWD-free deer herds is one way possibly stop the spread of CWD. Only use scents that are from CWD-free herds. Before purchasing deer scents, look for the official ATA Seal of Participation checkmark, and check your local hunting regulations before using any deer scents in the field. For a full list of participating brands, go to: https://www.archerytrade.org/manufacturers/deer-protection/