The mystical, magical whitetail rut. It’s what many of us wait feverishly to experience all year long—anticipation that builds into... 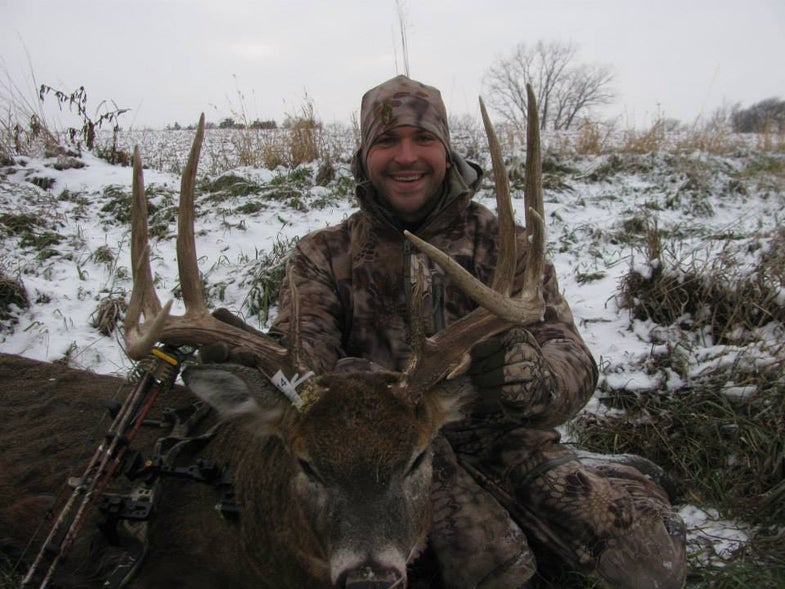 The mystical, magical whitetail rut. It’s what many of us wait feverishly to experience all year long—anticipation that builds into both blessing and curse. Especially when it comes to smart stand selection at go time. Obsess over most anything for a good length of time and, eventually, you can experience near-absolute clarity of thought. Seconds later, you can be trapped in a wicked tailspin of second-guessing. This is the dark side of our obsessive behavior.

To help ensure your focus (and success) during the fast-approaching rut, we’ve tapped a trio of diehard whitetail fanatics, guys who seem to have it figured out without second-guessing anything. And while they might not agree with that statement, their consistent success during one of the fall’s most-unpredictable stretches speaks volumes.

“It’s a spot where several draws come together, and it’s on the downwind side of an area just choked with cedars, which seem to be great bedding areas in Nebraska,” Herr explained. “Bucks come through there cruising for does, and it’s kind of neat to see how that all comes together. Shortly after first light, you’ll see the does start to trickle back to the bedding area, and maybe later on you’ll see a few small bucks, and a few more does after that. Then 2-3 hours into the morning you’ll catch the mature bucks coming through. It’s obvious those older deer know that cruising through any earlier would be a waste of their time; those bigger deer are always the last to come through, and they seem to know enough to wait for all the does to be bedded so they have the best chance of finding the hot does.”

“If we’re not on the downwind edge of a bedding area, we also like to get between two different bedding areas, and it seems like for us, in that part of Nebraska, those cedar thickets are the ticket for bedding. It seems like those bucks just travel from one to another, and you can take advantage of that. We’ve had great success in those areas with both rattling and grunting, and sometimes we just sit quietly and wait.”

STEEP SIDEHILL STANDS
Tony Peterson is another Minnesotan who bowhunts several states each fall, and, like Herr, he likes to target the edges of known doe bedding areas. But he likes to ensure a close-range shot by choosing areas with some unique topography.

“My favorite stands for the rut, is to find a situation where I can hunt a ridge near a ravine where there is a fairly severe dropoff,” Peterson explained. “If your stand is on the lip of that ridge, it’s a situation where a crosswind will be right for those cruising bucks, scent-checking for does bedding on the ridgetop, and the wind is good for you too, because the bucks don’t want to swing downwind of your location, down into that steep dropoff. And that dropoff can be a washout, or simply a really steep grade.

“I have one spot in southeast Minnesota that I call the ‘Big Buck stand,’” Peterson continued. “Because if you hunt it with a west or north wind, it blows right through a doe bedding area, and during the rut bucks will be cruising that downwind edge, back and forth, all day long. It’s literally my best place, one where I can almost guarantee a sighting of a mature buck when the rut is on. One big reason why, is because it’s back in the timber, it’s on the edge of a washout off a field edge, but back in cover where deer feel comfortable moving in daylight. It’s a classic funnel that promotes more deer movement and they feel comfortable there. I don’t sit field edges that much because the places I hunt get a fair amount of pressure. I like areas with more cover.”

BIGWOODS STAND STRATEGIES
Ben Royce, 31, of Peoria, Illinois, might be young (that’s him in the photo above), but his serious collection of big deer mounts has come in part because of his dedication to hunting several states each year, and also because of his ability to match his tactics to their unique, varying conditions and terrain. Royce typically hunts remote bigwoods stretches in northern Wisconsin, and more open farm country in Illinois, Indiana, and Kentucky.

“In Illinois, where the land is very open, I like to focus on funnel points near fields, and I like to pinpoint productive stand sites with help from game cams,” Royce explained. “An example would be a very thin draw that’s maybe 30 yards wide, and runs east-west. With a north wind I’ll set up on the south edge, and with a south wind I’ll hunt the north edge, where my cameras have captured the most doe activity. It’s always nice to get a big buck on your camera but what I’m really looking for is consistent doe activity,” Royce said. “During the rut, once you know where the does are hanging out, the bucks will be there.”

“Another scenario is to focus on ‘bedding to bedding’ movement. It’s rare for me, but when I can find two different bedding areas very near each other I like to set up between them, and like to sit from midday to evening. If I find one of these areas while scouting I won’t go in there and disturb it by setting cameras, and I won’t go in there at all until about November 5th to November 13th; when I do, I typically see lots of bucks cruising in the thick cover, and this will be at one or two o’clock.

“For my stand sites I’m always looking for pinch points where I can cover more than one trail, where you have more opportunities,” Royce said. “I think a lot of people focus on one trail; you have to stay away from those huge trails used mostly by does; you want to sit on those faint, smaller trails that intersect those larger trails, those are going to be the bucks that are scent-checking for does.”

In the very different bigwoods of northern Wisconsin, Royce likes to use topo maps to look for various types of distinct edge habitat that act as travel corridors for both bucks and does.

“I like to look for those distinct breaks in the terrain, and good examples can be that line between a stand of conifers and open woods, or a selective cut and a swamp,” he said. “Deer like to run those lines and they like to feed in newer selective cut areas. And I’m always on the lookout for large blocks of pines; bucks love to rub on pines, and they seem drawn to those areas where the forest is made up primarily of other types of softwoods.”

“Whenever I get stumped in the bigwoods, it seems like I’m always going back to swamp areas,” Royce said. “Especially in dry years, bigwoods deer really like to relate to swamps. So I break out the aerial maps, the satellite images, and topo maps, and look for higher points in swampy areas. I’ve found some great natural funnels, and taken some of my best bigwoods bucks that way.”