Black Hole targets have put their block-shaped target through a total redesign down to its very core. The versions now... 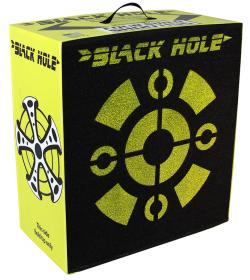 Black Hole targets have put their block-shaped target through a total redesign down to its very core. The versions now offer four-sided shooting and the company claims that the targets won’t eat your arrows.

The target features an open-face layered design on the front and back for shooting both fixed broadheads and expandable broadheads, while the sides of the target are wrapped with woven polyurethane for shooting field points.

In addition to the structural design changes, the new Black Hole has a new bright yellow-on-black color scheme and more shooting spots that make target acquisition easier than ever in any lighting condition. A sturdy handle on top makes for easy transportation of the Black Hole target.

While the price is attractive, the 11″ measurement stands out to me for two reasons. First, if you’re shooting a bow with a 70+ pound draw weight it won’t take too many shots to get through 11″ of target. Second, at 11″ the target isn’t even wide enough to cover 50% of most shooters arrows (most shooters I’ve seen at the range and 3D shoots have arrows 25″ and over). Obviously, you could shoot the 11″ face and have 20″ of target to stop an arrow, but 11″ isn’t a lot of room if you want to sight in your broadheads.

It will be interesting to see how long these targets really last. That being said, regardless of the target you’re using, they’re meant to take shots and they all break down over time. It’s just a matter of balancing the amount of shooting you expect to do with the expected life of the target and the price you’re willing to pay. I would use a black hole target as a broadhead target and expect to shoot it out after a single fall of heavy broadhead shooting before and during the archery season, but at $40, can you really go wrong?