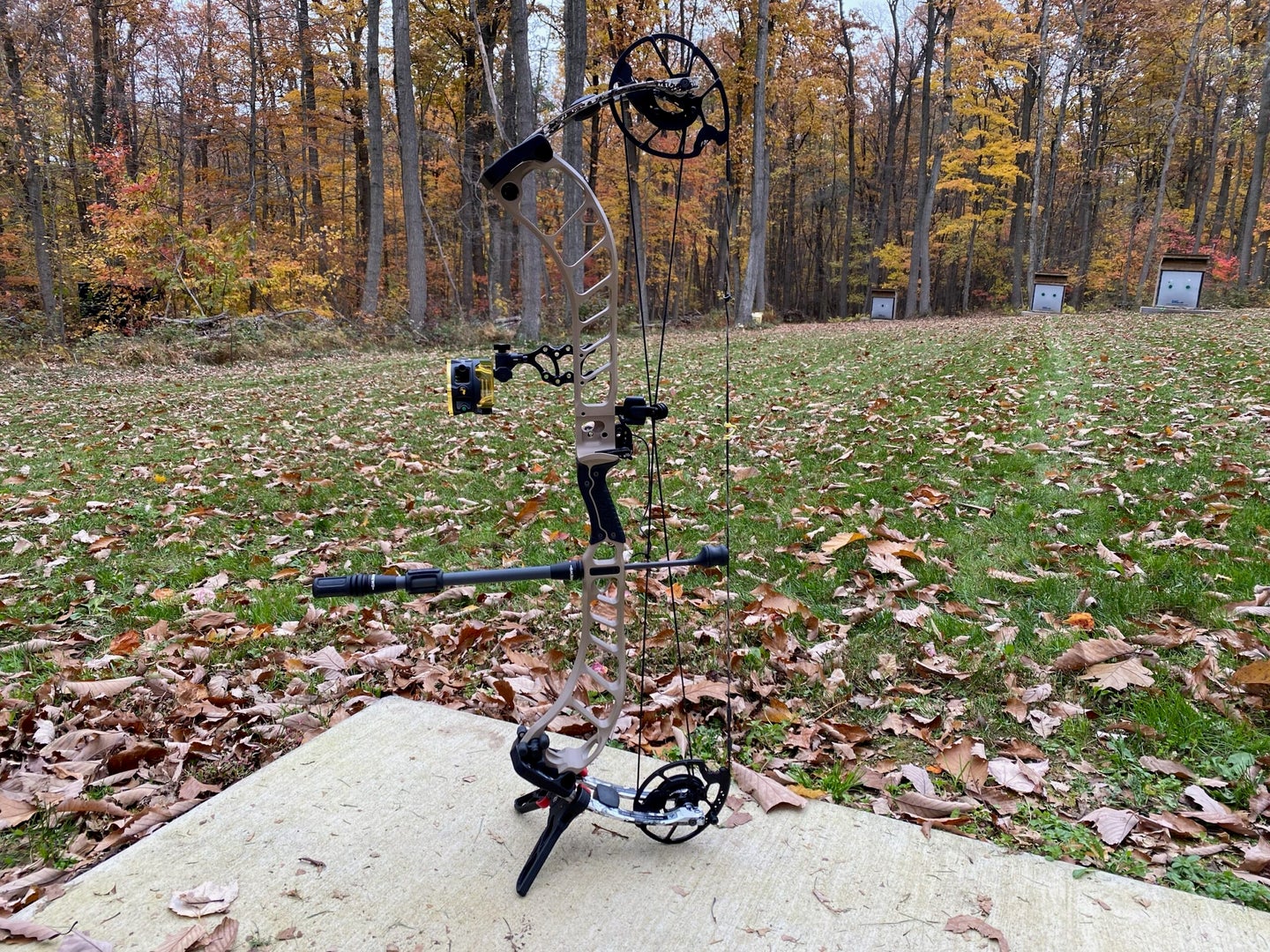 The author found the Priime Inline to be an easy shooting bow with very little vibration. P.J. Reilly
SHARE

Most years, bow manufacturers make relatively minor changes to their compound bows as compared to the previous year. Every so often, they make big changes, and the 2022 Prime Inline 5 has big changes from Prime’s signature feature, their parallel cam.

The 2022 series of Prime bows is called the Inline series—three bows with single cams top and bottom that achieve the same benefits offered by the parallel cams, but in a simpler arrangement. The end result is a lighter, quieter, less-complicated compound bow that shoots lights out.

Prime’s engineers came up with the parallel-cam design as their way to deal with uneven loads on the cams, which often leads to cam lean. Here’s how they explain what’s happening.

When a typical, binary-cam compound bow is at rest, the load exerted on the cams by the cables is equal to the load from the bowstring. When the bow is drawn, the load shifts. The string load gets lighter while the cable load increases. That load shifting puts uneven stress on the cams, resulting in cam lean that can cause tuning problems.

Prime’s solution to this problem was to position two cams side by side with the strings pulling on each cam and the cables in the center. The load is always in the middle of the system so cams stay upright.

Why the Switch to Inline?

While Prime’s engineers believe their parallel system is a great way to even out the load on cams, they recognize its flaws. The biggest flaw is it’s a complicated system. For example, last year’s Prime Nexxus featured a 7-piece set of strings and cables. Not exactly archery shop or bowstring maker friendly.

Parallel cams are also heavier and louder than most binary-cam bows. Prime recognized they needed to simplify their system while keeping the benefits of having parallel cams. Enter the Inline system.

How the Inline Cam Works

The Prime Inline bows are built with a three-track binary cam system as the engine. Binary cams are common these days, even Hoyt went to a binary cam with their Ventum line. But, the Prime Inline cams operate different other bows.

As the bow is drawn, the cables are pulled in toward the bowstring by angled cable tracks. By doing this, engineers are balancing the load distribution as the forces exerted by the string and cables change. The string load goes down, while the cable load increases. Prime’s engineers discovered that moving the cable load more toward the center of the axle leveled the system. At full draw, the cables are lined up on the cam directly behind the string. Everything is “in line” with one another, which eliminates cam lean.

Of course, as is typical with engineering, you affect other parts of the system when you change one function. On the Prime Inline bows, the limb pockets are slightly off-center where they connect to the riser. On right-handed bows, the pockets are shifted right and vice versa for left-handed bows. This shift in the pockets was necessary to allow for the cam system and to maintain a standard 7/8-inch center shot. That is, perfect alignment of an arrow on a rest on an Inline bow puts the center of the arrow 7/8 of an inch from the riser face. Had the engineers not shifted the limb pockets on the riser, the center shot would have been a much greater distance.

Another advancement built into the Prime Inline bows is the addition of removable cam spacers for tuning. These are solid spacers, rather than the cumbersome series of washers other manufacturers use, which tend to fly everywhere when you try to move them in search of the perfect tune.

The Inline bows come with same-sized spacers installed on either side of the cams. In the box, you’ll get two extra pairs of spacers. In each of those sets, one spacer is bigger than the other. Using these, you can move the cam left or right to get the tune you’re looking for.

For this spacer system, I give Prime a B. I’m a fan of solid spacers. It makes moving cams super simple. And the fact that Prime gives you both sets of spacers when you buy the bow is fantastic. Prime increased the simplicity of this system by designing the spacers to be removable, without having to remove the axles.

They accomplished that by making them similar to E-clips. Prime created a tool that essentially wedges open the C-shaped spacers so they pop off the axles. That’s genius, but the spacer tool will only be made available to pro shop dealers. It’s not something home-shop archers can get. They will have to remove the axles to change spacers.

I get that this is a good thing for pro shops, and it helps ensure that people aren’t just removing spacers willy nilly. The tool is reserved for the certified experts, which hopefully cuts down on problems. But I think if you have a tool that makes a job easier, everyone should have access to it.

Legacy Prime features built into the Inline bows include the swerved riser, center grip placement and Nano grip. Prime curves the riser below the handle with the swerve to match the curve above it, creating the sight window. Engineers have said that matching swerves above and below effectively neutralizes vibration that runs through the riser.

With its center grip positioning, Prime puts the throat of the grip in the physical center of the bow. That’s why when you look at a Prime, it seems like there is a lot more riser than normal below the grip. And there is. Other bows typically have a grip that sits low, which puts more riser above it than below.

Prime says the center grip helps balance the bow. And it does. There’s no question a bare Prime, with no accessories on it, feels incredibly balanced compared to other compounds. Starting with a balanced bow is ideal for setting it up to be balanced in the end.

The Nano grip is a soft, rubber grip that has aerogel underneath it for insulation. On a cold November day in the tree, you’ll appreciate that insulation which keeps the grip comparatively toasty.

The Prime Inline comes in three versions—Inline 1, Inline 3, and Inline 5. Each number refers to the axle-to-axle lengths of the bows. The Inline 1 is 31 inches, Inline 3 is 33 inches, and Inline 5 is 35 inches long. Each has a rotating module allowing for a draw-length adjustment range of 26 to 30.5 inches.

For my test, I borrowed an Inline 5 from Lancaster Archery Supply. It was set with a 29-inch draw length, and had a peak draw weight of 60 pounds with 85-percent letoff.

That setup launched a 477-grain arrow at a speed of 259 fps through Lancaster Archery’s chronograph. That’s decent speed for a 60-pound bow shooting a heavy hunting arrow. I put a 12-inch stabilizer on the bow, along with a five-pin sight. From the first shot, I noticed that this Prime had less vibration and was quieter than other parallel-cam Primes that I’ve tested.

The draw cycle was super smooth. There was no harsh peak to get over nor a dump at the end. The changes in force needed to pull back the string all were subtle, which made it feel like one easy motion.

Prime put a limb stop back on its Inline series. They hadn’t done that for a few years, and customers told them they wanted it back. The limb stop created the most solid wall on a compound bow. It’s like hitting a brick wall. Nothing budges after the stop hits the limb.

Why is that favored? And who likes it? Bowhunters are probably the biggest fans of the limb stop. It’s a no-thought-required way to know when you’re at full draw. Cable stops often have a spongy feel, which can lead to creeping forward off the stop, since there is some give when the stop hits the cable.

Cable stops tend to be preferred by people who like to pull through their shot, especially if they’re using hinge or tension releases. That little bit of give works well for an expanding draw that ends in an explosive shot. Hunters who use a trigger-style release—especially index finger releases—tend to prefer the limb stop. You haul the string back, hit the wall, take aim, and smash that trigger.

The Prime Inline I shot balanced beautifully. Even with just a 12-inch stabilizer, my pins sat nice and steady at 50 yards. There was almost no wandering.

I guess the thing I liked most about the Inline 35 is it’s a bow that doesn’t require a lot of focus to be accurate. There are tack-driving bows on the market that will do absolutely everything you want as long as you are focused on what you’re doing from start to finish. You need to be on top of your form, hand position, release, and follow through.

That’s great, except I tend to get lazy when I shoot.

Then there are bows that hit where I want without 100-percent focus. I believe the common term is to say these are “forgiving” bows. Your mistakes are not so immediately noticeable at the target. The Prime Inline 5 I tested is one of those bows. I find it relaxing to shoot such bows. I don’t have to bring my A-game every time I shoot.

Where The Prime Inline Is Lacking

One of the biggest cons of the Prime Inline is not making that spacer tool available to everyone. If you develop something to be a benefit, let everyone take advantage of the benefit.

Another issue is that Prime bows look funky. Having that center-position grip has its benefits when it comes to shooting the bow. But it also makes the Prime bows look different from other bows, which can turn people away before they take a shot. Some extensive marketing focused on why the center-grip is a good thing probably would be good for Prime.

What the Prime Inline Does Best

The best things about the new Prime Inline is there’s no cam lean, it’s quiet, and has minimal vibration. Also, only three strings are powering this bow, rather than seven. So it’s far simpler than previous generations.

The bow is nice to shoot. That might seem like something simple, but not all bows are like that. It doesn’t take a lot of effort to draw it or hold it, and the arrows go where you want even if you don’t execute a perfect shot.

Having three versions of the bow—Inline 1, 3, and 5—is a great way to appeal to a wide audience. No one is forced to pick something they might view as a little bit short or a little bit long. With three options, Prime offers something for just about everyone.

Final Thoughts on the Prime Inline

It’s hard to picture a Prime bow without parallel cams. But, this latest evolution is an improvement, so kudos to Prime for the willingness to make big changes. With the Inline series, it seems we’re going to have to create a new image in our minds when we hear someone mention Prime bows.