Most hunters I’ve talked with in the last year have never heard of the centerfire rifle ammo made by Dynamic... 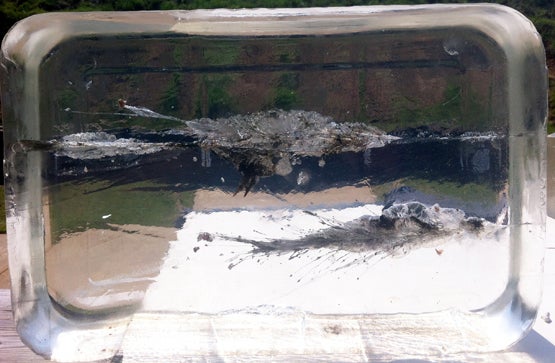 Most hunters I’ve talked with in the last year have never heard of the centerfire rifle ammo made by Dynamic Research Technologies (DRT), in Grant City, Missouri. That’s too bad because DRT rifle ammo packs an awesome punch, leaving game animals “Dead Right There.”

DRT rifle rounds are lead-free and frangible, made from a highly compressed core of metal powder inserted into a copper jacket. They’re engineered to punch through bones and heavy muscle, and then explode into the soft tissue. The frangible projectile erupts into multiple wound channels, and every bit of the bullet’s forward energy is transferred into the animal. Photos of DRT .223 and .308 fired into ballistic gel show the awesome stopping power of these rounds.

I got my first exposure to DRT last year in Oklahoma, on a deer hunt at the Chain Ranch sponsored by Smith and Wesson and EOTech. Everyone on the hunt was outfitted with S&W’s Performance Center M&P15 in .223/5.56mm.

I never got a deer. But late afternoon of my second day, a 210-pound black boar trotted into the field in front of my stand. I pulled my first shot high, shot again as he ran — a miss — and managed to drill the boar at 25 yards or so behind the right shoulder. The boar screamed, flipped over on his back, kicked at the air a few times and died.

I was using a DRT’s 79-grain TerminalShock .223 round. The hollow-point bullet punched through over an inch of hard gristle covering the pig’s ribs like a Kevlar vest, the ribs themselves, and then fragmented, delivering all the round’s terminal energy into the boar’s chest cavity.

Oh, and five of the people I was hunting with at the Chain Ranch took nice eight- and ten-point bucks, all with one shot of the DRT ammunition. None of those bucks went more than 40 yards.

In Texas this past April on a hog hunt, I took a 200-pound boar using DRT’s TerminalShock .308 Winchester round, firing a 125-grain boat-tailed hollow point. One shot at 70 yards in the hog’s mid-section, and he hit the ground, rolled over once, and went still. The .308 bullet pierced the boar about midway down the left side of his thick body, and maybe four inches down from the top of his back. Once the hog was skinned, I discovered a softball-sized circle on his right side, centered on tiny punctures made by pieces of the bullet’s jacket. Once inside the animal, the DRT bullet had released all its energy into a cone shape blast that pulverized its way through to the far wall of the body cavity.

Frankly, it was lousy shooting on my part. I was trying for a spot much closer to the pig’s front shoulder blade. I believe that with another .308 round and my shot placement, that boar may well have bolted into the very thick East Texas woods. I’m sure he would have died–but would I have been able to find him?

With DRT, I didn’t have to find out the answer to that question.

At the shooting range, DRT .223 and .308 rounds are as accurate as any factory ammo I have fired, easily punching out one-inch or better groups at 100 yards. Currently DRT offers its TerminalShock centerfire rifle rounds in .223 Rem, .30-06 Sprg, .308 Win, .300 Win Mag, and .300 WSM, in bullet weights ranging from 55 to 200 grains. The company also makes handgun rounds and a .50 caliber muzzleloading bullet, plus sells its handgun and rifle bullets separately for handloaders.