Natural Food Plots: How to “Grow” Them This Winter and Why They Work

When someone says food plots, we typically think of tractors and four wheelers and seeders and soil pH and lime.... 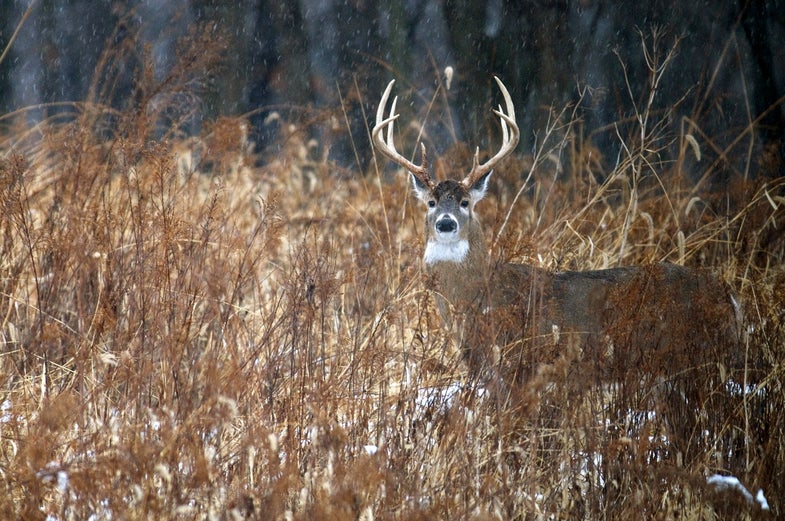 When someone says food plots, we typically think of tractors and four wheelers and seeders and soil pH and lime. We don’t think of chainsaws and winter boots and mittens and bulldozers and log skidders. But you should if you want to improve your deer hunting dramatically. I’m talking about natural vegetation food plots, which are the secret weapon of professional property managers—the guys who build great deer properties for a living. Winter is a great time to do woods work: no mud holes and ruts, no bugs, no snakes, and no 100-degree days on the end of a chainsaw. Plus, winter is the best time of the year to be in the deer woods working with natural vegetation.

Modern Day Food Plots
Planted food plots have been around since the late 80s when the Whitetail Institute came up with their world famous Whitetail Clover. Younger deer hunters have grown up with food plots. You plant a couple of acres here, and a few there, and _Eureka!—_you’re covered up with deer. The typical food plot is 1-3 acres in size and planted with high-quality cultivars, because deer just can’t seem to live without them. You plant the plots in spring or summer and you hunt deer over them in the fall. The cultivars used in the plots are highly nutritious and typically have a protein level of more than 20 percent. Meanwhile, natural vegetation is lucky to break 12 percent protein. A well-maintained food plot can produce a couple of tons of highly digestible, super nutritious food per year. Trouble is, they are relatively expensive to plant (i.e. time and materials), require regular maintenance, and you’re lucky if they last three years or more. Typically if a hunting property has 3 percent of its total area planted in food plots, it’s considered pretty darn good. Savvy deer managers know that planted food plots are nice, but native vegetation is necessary part of the deer property equation.

Natural Deer Foods
Natural vegetation is a critical component of every deer property. The more natural vegetation a deer can use, the better. It grows about everywhere and has evolved along with deer over the past millenia. It’s a terrific source of food and cover, and a staple of a deer’s winter survival kit. Deer use natural or native vegetation 24/7/365. Deer depend on natural vegetation for survival in agricultural areas to the deepest darkest forestlands.

In the natural world, newly created open spaces quickly grow up with sun loving plants like grasses and forbs. The low growers are replaced over time by higher growing shrubs and seedlings, which eventually are replaced by still higher-growing saplings and pole-like trees, which grow into mature forests. This is called natural succession; it’s how nature progresses over time. It’s a race to the top, driven by sunlight availability. Trouble is, a complete successional cycle can take a couple of lifetimes and deer mainly prosper primarily in the earliest stages (grass/forbs to shrubs/seedling) stages of the cycle which in most places will last somewhere around 10-20 years of the succession cycle. By the time woodland succession reaches the pole timber stage, it’s of little use to a deer. A deer can starve to death in an enclosure full of pole timber.

**Enhanced natural vegetation areas **
We refer to natural vegetation that has been created and/or enhanced through artificial intervention like chain sawing or bush hogging as enhanced natural vegetation areas. ENV practices turn back the hands of time to recreate successional conditions typically associated with an earlier successional phase. Loggers do it by creating open spaces in the forest and exposing dormant seeds plants to sunlight. Forest fires do it as do massive tree die offs due to disease and or pests, farmers who abandon agricultural fields initiate a new early successional woodland cycle. Deer hunters do it any way they can by creating open spaces that will stimulate natural deer foods to grow. ENV practices are generally designed to put additional sunlight on the ground, the key to new growth which feeds the earliest stages of the successional cycle.

Food per Acre
An un-thinned natural forest will produce about 50 pounds of food per acre. A thinned woodlot might produce 300 to 500 pounds of food per acre. A clearcut area in the woods might well be producing 1,000 pounds of deer food per acre per year. The differences between un-enhanced areas and woodlands left to develop naturally are dramatic. Hinge cutting where a hinge is left on a 6- to 8-inch (diameter) felled tree so it will continue to grow as it lies on the ground will produce tons of food per acre as will pushing over 3- to 8-inch trees and brush with a log skidder or bulldozer. Crushed brush rivals planted food plots in food produced per acre. The principal difference being nutrition. Food plots produce about twice the nutrition of natural vegetation areas.

Any shaded area that suddenly is exposed to sunlight either by mowing or cutting or even crushing becomes warmer due to sunlight reaching ground, which has not experienced direct sunlight in many years. This warmth and light stimulates seed sprouting and will turn bare ground into a deer smorgasbord. It’s about that simple, no plowing, no disking, no herbicides necessary, just some time with a chainsaw and some safety gear. All kinds of stuff will pop up after the sun hits the ground, small plants and forbs will generally emerge first followed by woody stemmed seedlings and in some cases sprouts and shoots from the roots of cut trees. The good news is that deer are not particularly fussy eaters and most natural vegetation is readily consumed.

The Numbers Don’t Lie
A quick look at some typical numbers will get you into the winter woods in a hurry. Let’s take a typical small property of, say, 25 acres or so. You have 23 acres of wooded forest and 2 acres of cleared, tillable land. You plant those 2 acres in food plots for say $1,000 and you produce roughly 8,000 lbs. of deer food per year. That’s enough to feed roughly four deer at 6 pounds per day or, on average, 2,000 pounds per deer per year.

Now you take a look at your woods. Let’s say it’s a mixed woodlot in various stages of succession. It produces 75 pounds of food per acre, which equals 1,725 pounds total (75 lbs. x 23 acres). Now you take out the chainsaw or sell off your marketable timber or firewood and expose say 20 of the 23 acres to sunlight. In a few years, that sun on the ground will help create maybe 500 to 750 pounds of food per acre. That’s enough to feed an additional 5 to 7 deer. Add some modest food plots and you have a nice little deer program (food and cover) going on your 25 acres. The net increase through enhancing natural vegetation is roughly 6 deer on your 25 acres (obviously the deer will wander on and off your property however they so choose). By anyone’s math, that is a huge increase. Plus, most ENV projects create great wildlife habitat, which means more fawns, less predation and improved turkey and grouse habitat.

Now how about a real world example? We manage 500 acres in western New York. Last year we increased the deer carrying capacity on our 500-acre property significantly by crushing 40 acres of shrub land and pole timber. The area had matured to the point where deer seldom used it. We crushed it with a JD 750 dozer and put almost everything growing on its side. It still looks like a bomb site, but the deer immediately stared using the area. That 40 acres was the best cover around and a real smorgasbord of natural vegetation. It is now producing roughly 500 pounds of new food per acre. The tipped-over trees will gradually die over the next three years but by then a replacement class will be well started. If past projects are any indication, in three years it will be producing upwards of 2,000 pounds per acre, or an additional 80,000 pounds of deer food. That’s the difference between a good deer property and a fantastic deer property—and we won’t have to do a thing for the next 10 to 15 years.