Is Clover the Ultimate Food Plot Crop? by OutdoorLife At the risk of sounding redundant, I want to talk clover... 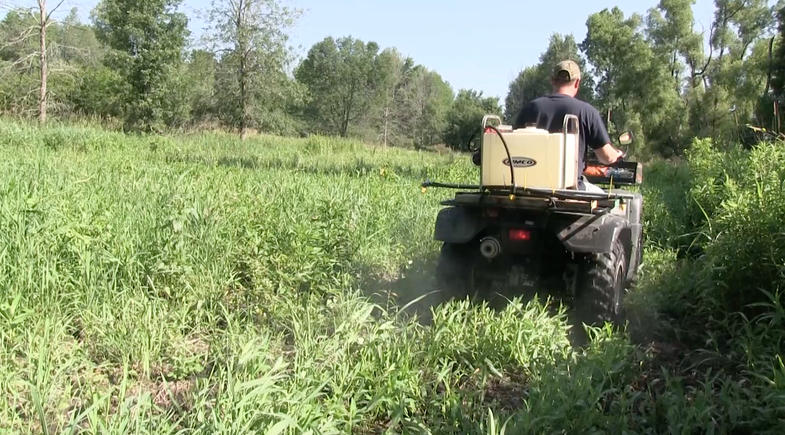 Is Clover the Ultimate Food Plot Crop? by OutdoorLife

At the risk of sounding redundant, I want to talk clover a bit more this week. That’s probably because it’s time to get serious about the clover plots on Noah’s farm. It’s been an unusually cold, wet spring here in southern Michigan. In classic Midwest fashion we were about to enter a week that featured some temps in the mid-80s. . . almost exactly a week after snow fell.

Which is, of course, an ideal illustration of the importance of clover in your food plot program.

Clover is amongst the first forages to green up. I’ve been capturing images of deer and turkeys in my clover plots for several weeks. In fact, when we had our last measurable snowfall here in early April, the clover was being pawed at by a herd of a half-dozen whitetails.

I don’t have a ton of acreage to devote to food plots and it’s important that I use every acre in the most productive way possible. I’ve mentioned in previous entries that I add clover to most of the plots I plant. I’d like to expand a bit here on why that is.

I started adding clover to every food plot I plant about four years ago, minus anything I plant in corn or beans. Truth be told, it wasn’t something I started intentionally. I planted one of the first plots on my 17 acres in a brassica blend that happened to contain clover. The following spring, the clover came back and I decided to simply let that plot remain in clover. I wasn’t sure how it would turn out because I hadn’t done much to correct the soil PH nor had I added much fertilizer.

But the plot continued to fill in with clover and is now a great deer producer.

Based on that experience, I now add clover to every fall planting. This gives me an option in the spring that doesn’t require another planting. It saves money, time and still produces a highly attractive food source. But there are other benefits as well.

Fertilizer isn’t cheap. In fact, the “green manure” trend is one in which clover and other green plants are used as organic fertilizer to save on costs and to reduce chemical use. You simply plant clover in the spring, allow it to grow throughout the summer and then till it under prior to planting a fall plot.

It builds the soil and nitrogen is released as the tilled-under vegetation decays. Which means every plot I planted last fall is currently growing a potential patch of “green manure” should I elect to till it under and plant another crop this fall.

Clover is also fairly low maintenance, which is a desirable trait these days as time is in short supply. That said, it’s not completely maintenance free. Last week while checking trail cameras, I noticed that my primary clover plot has far too much grass in it. To remedy that situation, you have two options: Spray with a grass-specific herbicide or mow.

Mowing can work so long as the grass is taller than the clover and isn’t too thick. Spraying is generally more effective but you have to be careful – only use a grass-specific herbicide, one of the most popular of which is Poast.

If you’ve priced Poast lately, you know it’s not cheap. Check around locally for herbicides containing sethoxydim. That’s the active ingredient in Poast and you may be able to find a generic brand that costs less but is nearly as effective.

I sprayed my clover earlier this week with a generic version. I’ll let you know how it turned out in a week or two. I still intend to mow the clover to further combat the grass but the spray is added insurance that the clover will have the best chance of overtaking the weeds.

I was pretty excited to see that a new plot established last year was sprouting a great crop of clover. Last fall, the plot was sowed with a blend of oats, radishes and, of course, clover. Now with the clover coming on strong this spring, I’m thinking very seriously about letting it go and having a second clover-only plot on the property. Even if I do decide to till it under and plant something else, I know I’m money ahead because I’ll save some on fertilizer costs.

Now is the time to give your clover plots some attention. Mowing, spraying and fertilizing.

It won’t be long and it’ll be time to get fall plots in the ground. When you plant, consider adding clover to whatever you’re putting in.

I think you’ll be glad you did next spring.