A wise man named Steve McGrath once told me: “There are a lot of things you can’t control when you’re... 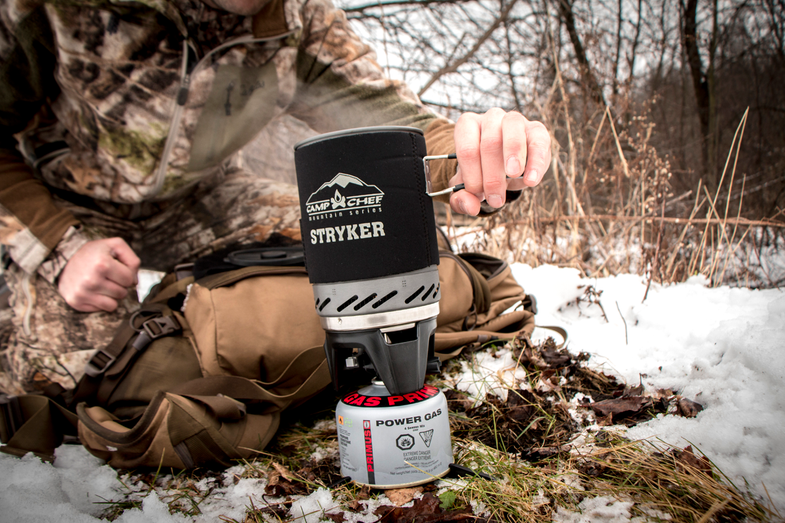 A wise man named Steve McGrath once told me: “There are a lot of things you can’t control when you’re hunting or fishing, but if you don’t eat well it’s your own fault.”

Moments earlier, as we were floating along Oregon’s Columbia River, our fishing guide had pulled out an impressive spread that was fit for a black-tie gala, complete with homemade salmon cakes, various other salmon treats, and gourmet crackers with fine cheese. It didn’t matter that we weren’t catching any fresh salmon of our own, and that munching memory will always be a highlight of my trip.

While a cold snack has its place, sometimes there’s no substitute for a hearty hot meal…especially when you’re hunting dark to dark in the bone-chilling cold. Camp Chef, a company known for its sweet selection of outdoor cooking gear, added a new product to its lineup this year that makes it easier than ever to turn up the heat when you’re off the grid. It’s called the Stryker—a portable stove that’s worthy of leasing some real estate in your hunting pack.

This backpacking stove concept isn’t something new by any means. The Stryker actually looks identical to many other existing backpacking stoves, such as certain models from Jetboil or MSR. The purpose of this review isn’t to provide a complete side-by-side comparison of backpacking stoves; I’m simply here to tell you about my experience with this handy little devil from Camp Chef.

The Stryker comes in two models, both priced super reasonably: MS100 ($68) or MS150 ($73). The MS100 is compatible with an isobutene fuel source, while the MS150 uses a propane tank. I chose the isobutene option because it’s smaller and much easier to pack. Depending on numerous variables (wind conditions, temperature, how high you’ve got it cranked up), it’s pretty safe to say you’ll be able to cook 10 or more meals with a single 8-ounce isobutene canister. In other terms, you can count on at least a 1-hour total run time on high heat with the 8-ouncer. Convenientely, isobutene canisters are typically available at Wally World or just about any hardware or camping store.

Speaking of planning your fuel consumption, several serious backpackers from various online forums offered similar wise advice. They recommended you do some experimental cooking sessions with your backpacking stove prior to going on a trip. Start by weighing the fuel canister while it’s full. You don’t want to count the weight of the metal canister itself, only the starting weight of the fuel. Once you’ve determined the starting weight of the fuel, replicate your average cooking use case—perhaps boiling a liter of water. When you’re done cooking, re-weigh the canister to see how much fuel was lost during your cooking session. Divide the total starting weight of the fuel by the amount that was lost during your cooking test, and you’ll have a really good idea of how many more liters of water you can boil (i.e. how long a tank will last). This will save you from packing too much fuel when you could be packing something more important—like extra ammo.

Both Stryker models utilize what Camp Chef refers to as “Heat Ring” technology—a fancy name assigned to its high-surface-area aluminum base, which collects heat very quickly and efficiently, allowing you to boil a half-liter of water in about two minutes. These stoves each come with the following components: 1.3-liter pot and insulated neoprene cover; fold-out, heat-safe handle; rubber lid; folding plastic tank stabilizer; and mesh carry bag. All the pieces break down nicely to be stored in the pot, weighing a total of 18.3 ounces (MS100) and 21.4 ounces (MS150) without their respective fuel sources. No need for a match or lighter, as it has a push-button electric ignition. You can accessorize your Stryker with pots and pans and such.

I’ve used my Stryker to heat coffee. I even used it to cook pulled venison rib sandwiches (stay tuned for recipe) while deer hunting in the wilderness of Nebraska’s Pine Ridge; my three buddies didn’t seem to mind the hot meal after riding hours on horseback in 40mph winds on a 30-degree day. There are many uses for this tiny stove. Consider using it to warm your hands over the steam of boiling water, or maybe to clean your butchering tools before you pack out a kill. If you’re feeling lazy and want to build a campfire, use it to ignite your kindling. I’m already looking forward to cooking some streamside trout next spring.

You can always use the stove to re-hydrate and heat up freeze-dried meals, such as those from Mountain House. If you’re not as concerned about conserving weight in your pack and you want to eat like a boss—perhaps during a day-long scouting mission—consider packing a vacuum-sealed batch of venison chili or another favorite wild-game meal.