A Recipe for Bear Ham and White Bean Soup

Every time I opened my freezer in the past couple months a packaged marked, “bear ham” was staring up at... 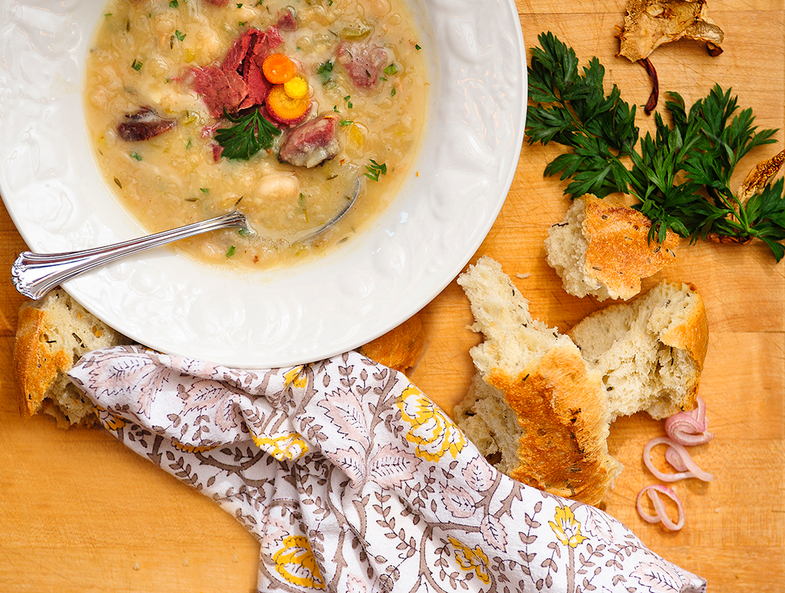 Every time I opened my freezer in the past couple months a packaged marked, “bear ham” was staring up at me. I had been hunting for some inspiration before preparing a recipe. That stirring finally came after watching the newly released film, The Revenant, in which the main character—a real-life 1820s fur trapper and frontiersman named Hugh Glass—is mauled within a breath of his life by a grizzly bear and then left for dead in the cold, wet wilderness.

Just for the record, I’ve never been mauled by a bear, nor hunted one. However, a bear has treed me. That hair-raising event happened during the summer of 1982. See below the recipe for the full story.

The bear ham came into my pantry by way of J.J. Reich. He’s up the road from me here in Minnesota, and works at Federal Premium Ammunition. Fun fact: He tagged the 150-pound sow with a Savage American Classic Model 14 in 30-06 with, Federal Premium 180-grain Trophy Bonded Tip.

1. Prepare dried beans for cooking using any method you prefer. I soaked mine overnight in about 8 cups of water.

2. Drain and rinse beans, discarding excess water. In a large enameled cast iron pot (I used my Lodge Cast Iron 7.8 quart Dutch Oven) add the beans, ham, (and pork shank if you opt for it), bay leaf, 1 diced onion, the thyme sprigs, 8 cups of water, and a teaspoon of salt. Heat to a simmer, cover and let simmer for 2 hours, stirring occasionally.

3. While the ham and beans are simmering, dice the potato, remaining onion, carrots, celery, garlic and carrot tops.

4. Place the potatoes in a small saucepan, cover with water and add two fingers of salt. Reserve diced vegetables.

5. After the ham and beans have been simmering for one hour, sauté the onion and garlic in bacon grease over medium heat until translucent. Add carrots and celery, mix together and sauté about 3 -5 more minutes. Add veggies to Dutch oven, mix well, and simmer another hour.

6. While the soup is simmering, put the potatoes on to boil. Cook until fork-tender. Remove from heat, drain, and put in a mixing bowl. Mash the potatoes adding a couple tablespoons of cream or whole milk. Set aside.

7. After the soup has simmered for two hours, remove the bear ham, (and pork hock or shank, if you opted for it), to a plate to cool until you can handle. While ham is cooling, gently stir in the mashed potatoes mixing well. Pull meat from bones and add back into to soup.

Okay, now that you’re well fed—back to the story.

Between my sophomore and junior year in college I applied, and was selected, to work in the camp store at Lake MacDonald Lodge in Glacier National Park. When I reported for orientation at the end of May, arriving via the Amtrak Empire Builder and disembarking at the Browning station to the east of Glacier, we were told that, “…one of you will not return to your family in September.”

Wide-eyed, I listened intently. We were told that every year since the park’s opening, an employee had either fallen off a cliff, died of injuries sustained during reckless hiking, or encountered a grizzly and was mauled to death. Not unlike Hugh Glass. So, when they came to the part about bear bells, dropping or stashing your food pack, and emergency defenses like climbing a tree should one encounter a bear, I listened carefully. (I’ve since come to learn this was a scare tactic aimed at keeping us safety-aware and on our toes when hiking in the heart of grizzly country.)

Nonetheless, one day out on an overnight hike in a remote part of the park I heard grunts and then witnessed the mass of a grizzly with her cubs in tow. Their proximity to my location was uncomfortably close. Per my orientation, I dropped my pack with haste, and eyeballed a tree to climb that distanced me from my pack, and from the bear and cubs in case our paths were to cross. With legs scratched and bloodied from shimmying up in shorts, I developed a short-term love affair with a sappy pine, hugging it tightly for about an hour until the sow and her cubs sauntered out of sight.

Just one shy of 35 years have passed. Yet, I can still feel the reverence, humility, and yes, terror, that swelled within as I clung tightly to the pine. She could have closed the distance between us in seconds and shaken me from my perch. Or climbed up after me and dragged me down. She could have mauled me and devoured me. It left me chilled with hair-raising, justifiable fear longing for safety the way a frigid January day in Minnesota leaves you chilled to the bone hungry for a piping hot bowl of comforting soup.