A Recipe for Fried Frog Legs

Spring came early in Minnesota this year—especially for the southern half of the state. If you were near one of... 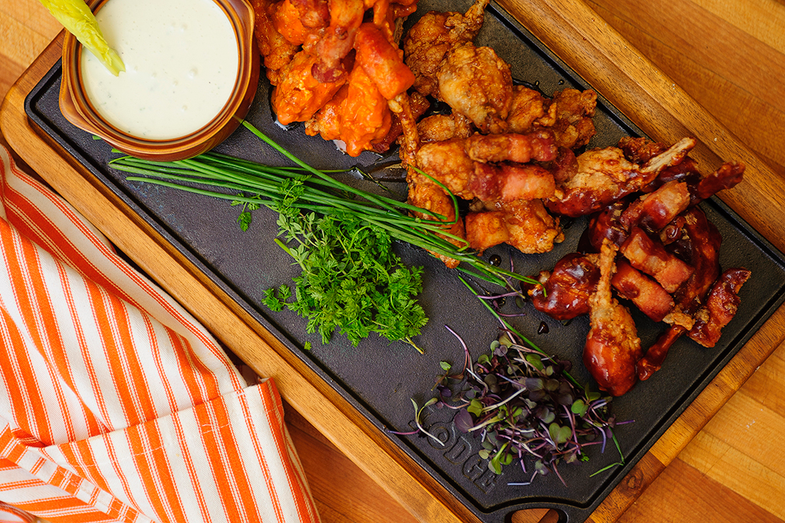 Spring came early in Minnesota this year—especially for the southern half of the state. If you were near one of our many lakes, rivers, or ponds, you could hear the frogs croaking in March. That’s a rare phenomenon for us, because we typically still have snow pack theh. But, sick with cabin fever, and taking a cue from the cold blooded amphibious hoppers, most of us bipedal creatures from the North threw open windows and doors and began warming ourselves in the sunshine and doing a little croaking of our own.

During one such a bone-warming occasion, Paula and Kristi, both professional and sporting women originally from Tennessee and Kentucky, respectively, shared with me their tales of bullfrog gigging in the mucky, mosquito-infested, boot-sucking swamps of their knobby-kneed Southern youths.

As the three of us thawed, Paula and Kristie’s comedic southern storytelling left me laughing out loud. The bullfrogs from their youth grew bigger, their bare-handed grabs more acrobatic, mosquito welts more mountainous, and near-death experiences from water moccasins more harrowing. It also inspired a frog legs recipe, served up three ways, and sure to satisfy spirited frog giggers from any region. 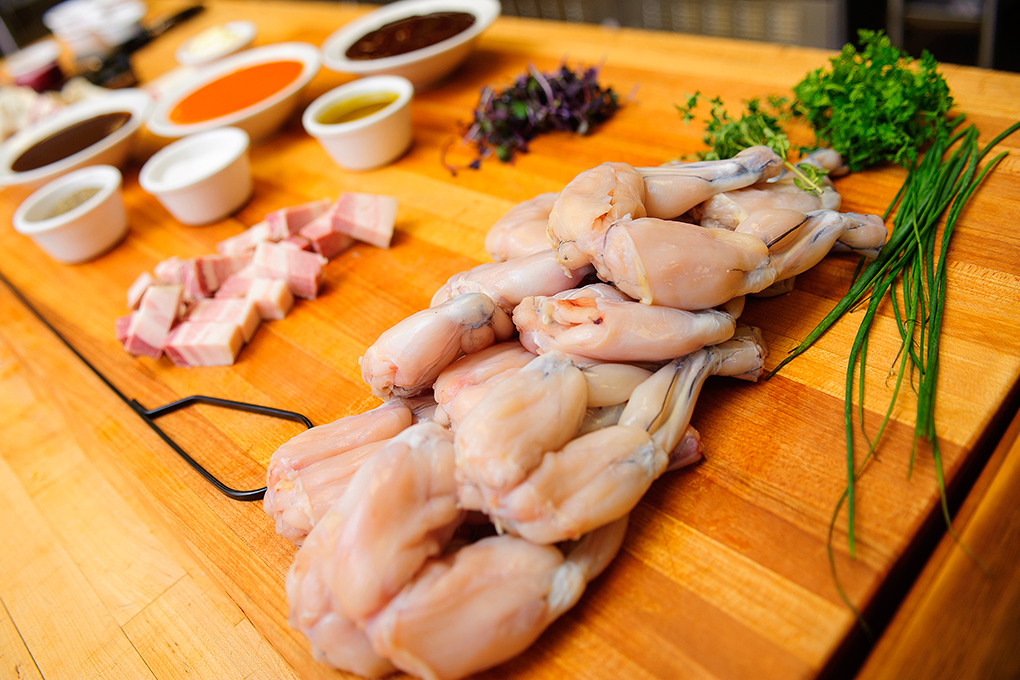 Sauces for tossing
(Store bought or made from scratch) Start by lollipopping the legs. To do this, detach the “calf” muscle with the tip of a knife and strip the flesh off the bone by pulling and scraping. 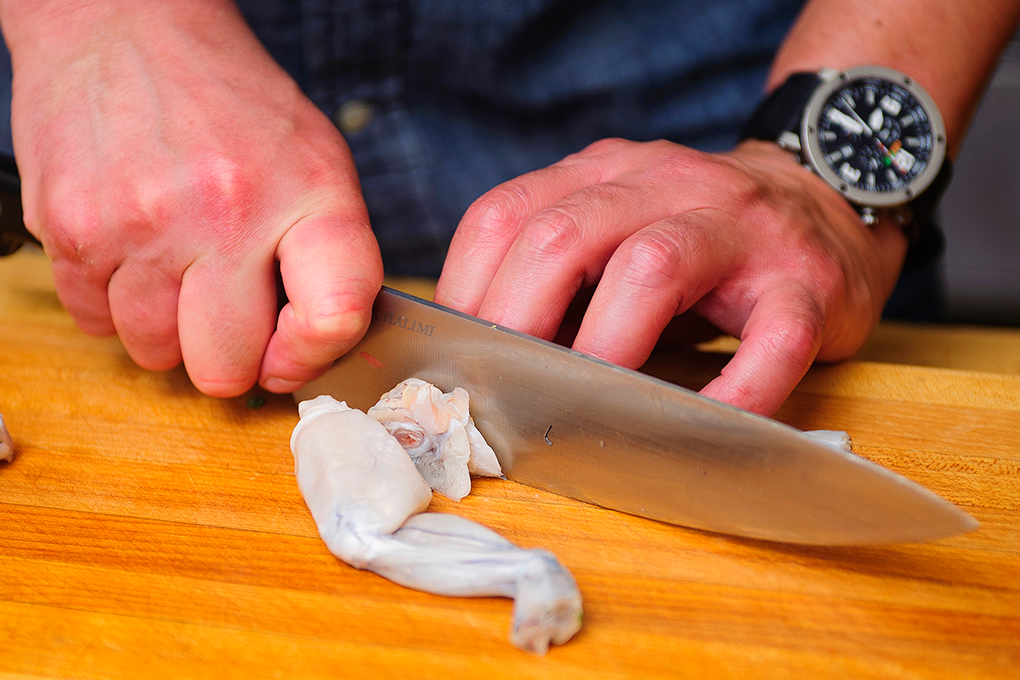 Cut the legs in two by cutting down on each side of the tailbone. 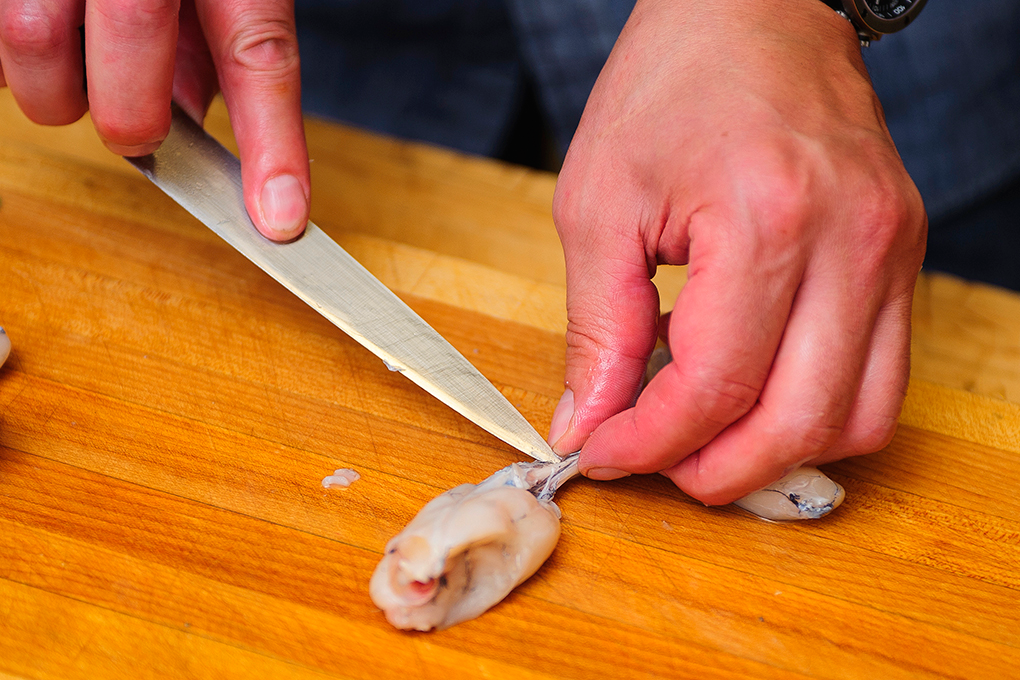 Slip the tip of the knife between the tibiofibular bone and the calf muscle. 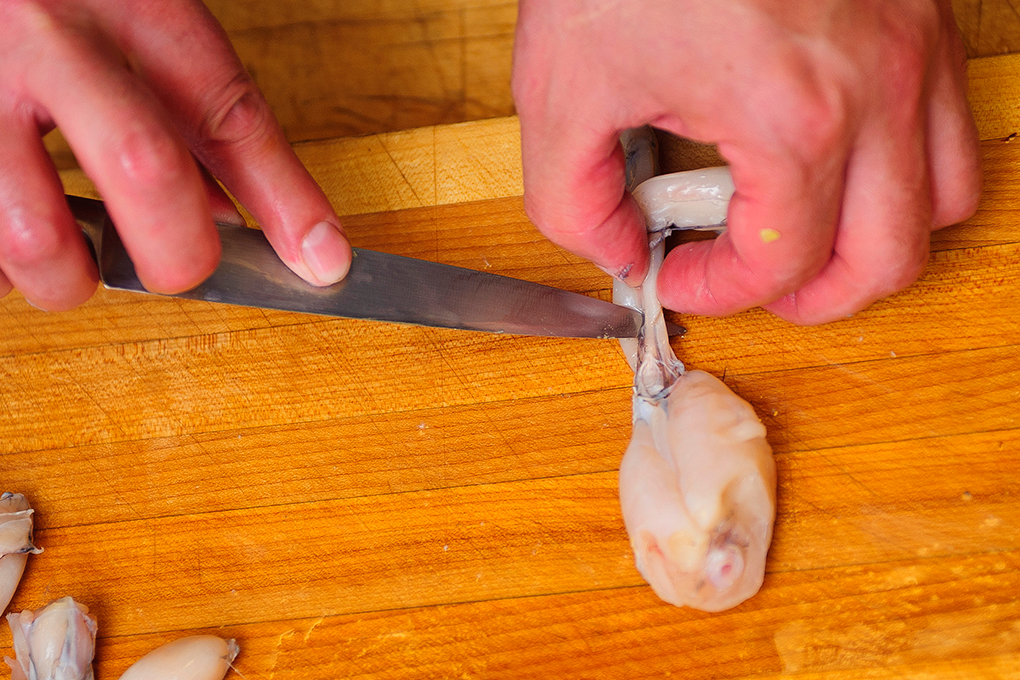 Slide knife along the tibiofibula to release the muscle 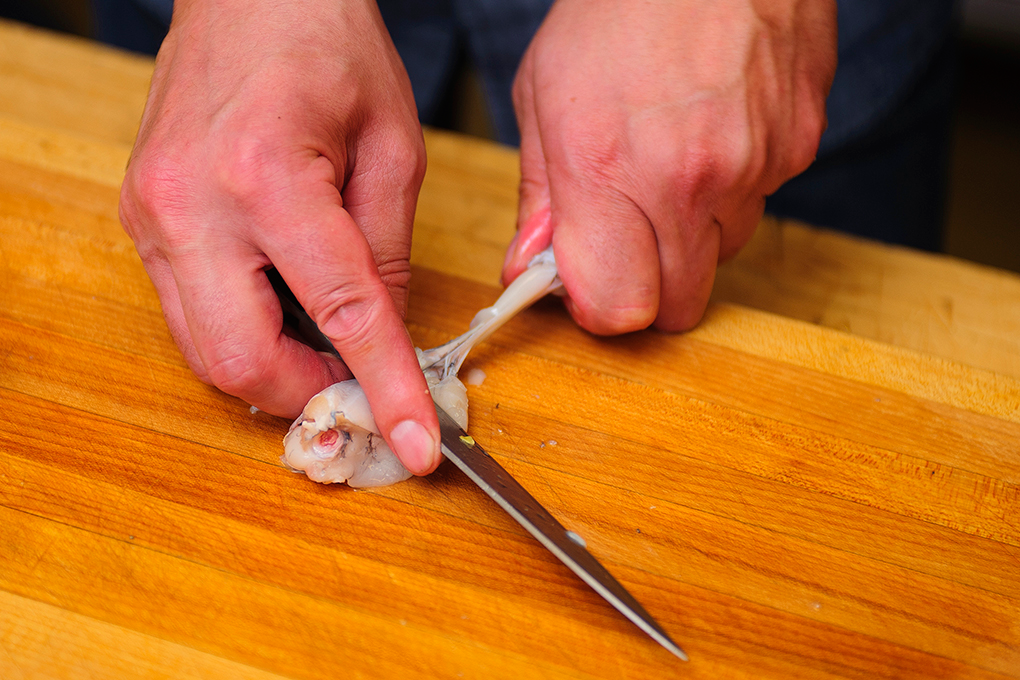 Pull back the calf muscle to expose the tibiofibular bone. 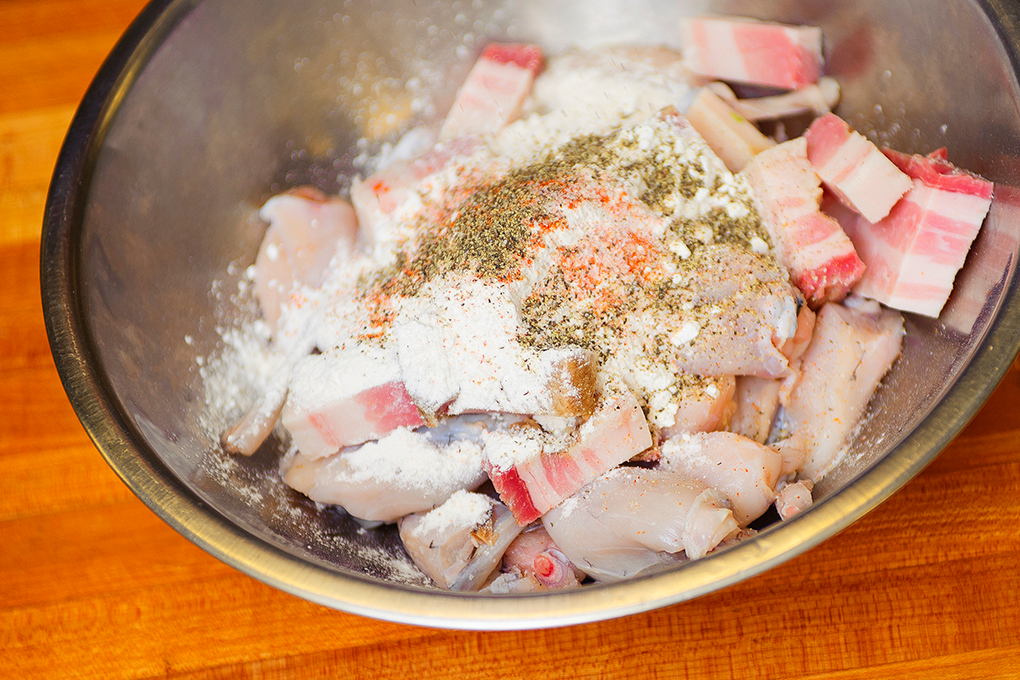 Fill a cast iron skillet with about 1 inch of oil and heat. Toss legs, cubed bacon, flour, cornstarch, salt, pepper, cayenne in a large bowl. Tip: Adding cornstarch in a 1:1 ratio with a flour dredge makes for a much crispier coating on any deep fried food. 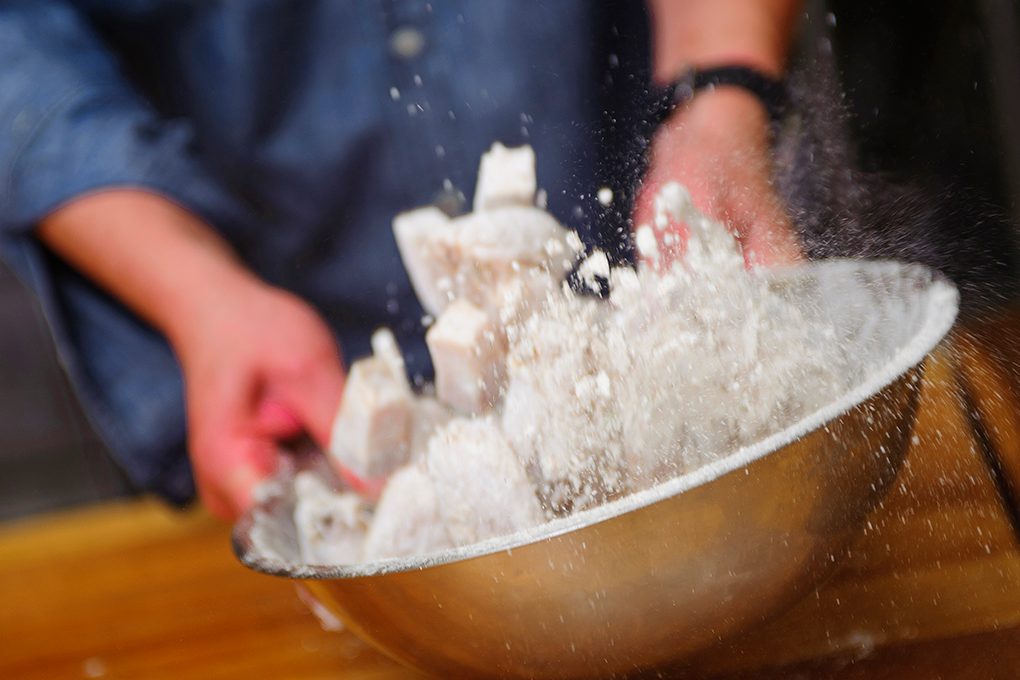 Toss to coat well and gently place the legs in the hot oil. 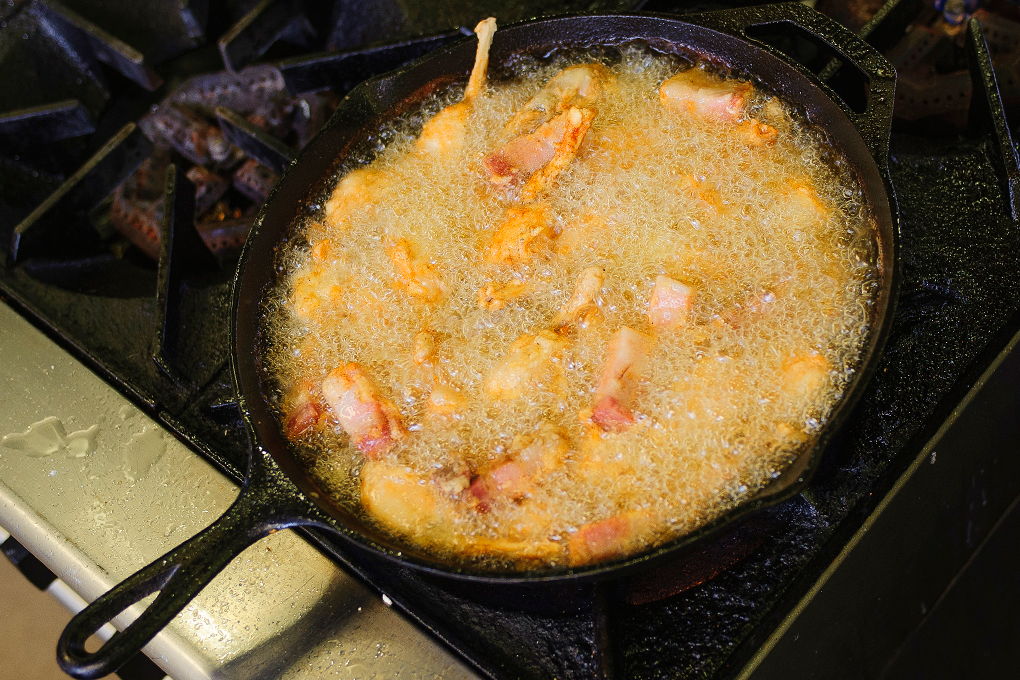 When the legs are getting golden, lay in the bacon cubes. 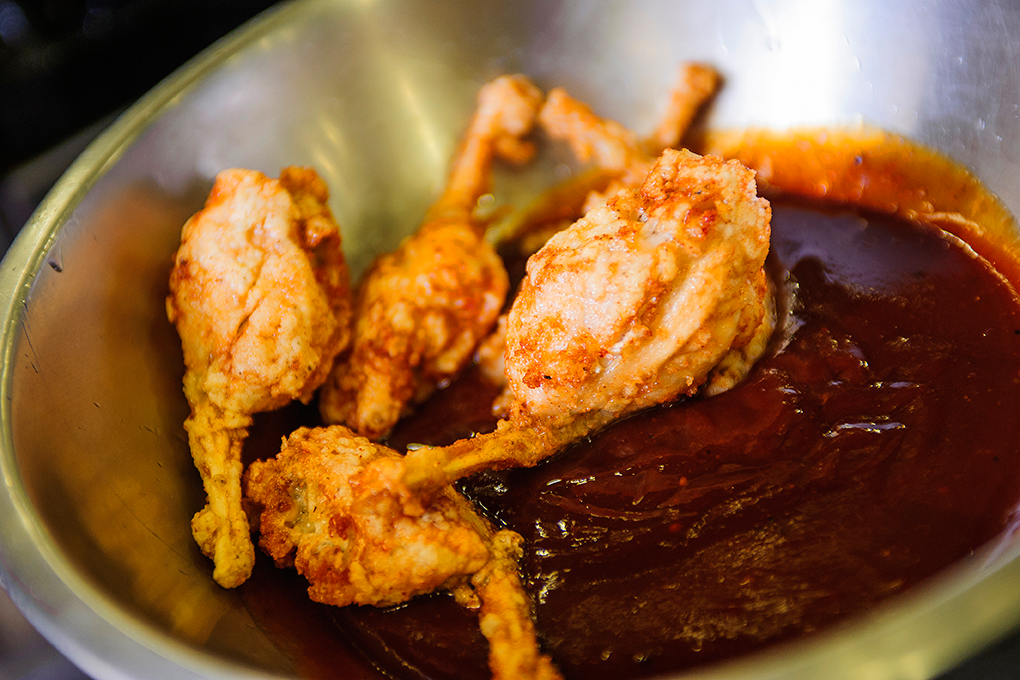 Carefully lift out the legs and bacon bites, drain for a moment, and then divide and coat with the three sauces. Here’s barbeque, although buffalo is my personal favorite and triyaki is also excellent. Plate up for your guests, crack a beer, and enjoy.