How to Make a Trickle Bait Barrel for Hunting Spring Bears

Even here in interior Alaska, bears will soon be rousing from their winter slumber. For many of us, that means... 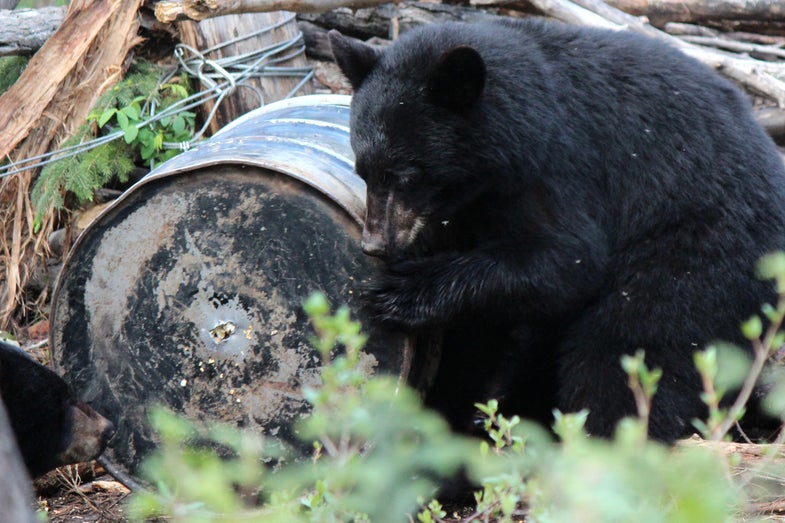 Even here in interior Alaska, bears will soon be rousing from their winter slumber. For many of us, that means that hunting season is just around the corner, and (where it’s legal) baiting is about to begin. If you’ve ever done it, you know that bear baiting is a ton of work, and if your site gets hit by more than one or two bears, it can prove difficult to keep it from running out of attractants. You’ll likely be spending a lot of money, time, and effort replenishing bait, and you may be missing some bears when the barrel runs dry. So think about ways to make your bait last longer and your trips to the site more efficient.

The first order of business with a bait barrel is securing it so that bears can’t either rip it open or drag it away. I tether a poly drum securely with a large cable (with a foot or two of slack) between barrel and tree. Last year, I clamped the cable to a steel rod inside the end of the barrel (opposite the trickle hole), then ran the cable through the end and clamped it to tree. This allows the bears to roll the barrel around and get the food out, but they can’t get a solid grip on it to damage the cable or pull it through the barrel.

It’s common to have a single small opening for bears to get food out of the barrel. This makes them work at it, and makes the food last longer. But until my buddy Nick showed me, I never realized how small you can make the hole and still effectively draw bears.

Cut one very small hole—between the size of a quarter and a half-dollar—in one end of the barrel. I drill the hole in the inset bung (or filling port) of the barrel so that bears can’t get their claws in the hole to enlarge it. This small port works especially well if you’re using dog food, popcorn, grain, or other small caliber of bait. You want the bears to be able to get only a few kernels through the hole at a time. One would think that the bears would get frustrated and move on, but black bears are very persistent animals, and they will get every piece of food out of there.

After you fill the barrel, either stand the drum up on end or, if you lay it on its side, jam sticks in the hole so you can instantly see at a distance if the bait was hit by a bear without contaminating the site with your scent.

Obviously, your bait will last much longer if it’s accessible through a small hole. This is a big deal if you are hunting a remote areas and can’t replenish it often. If bears can eat as much as they want, as quickly as they want, you will be hauling a whole lot of bait. In addition, the less time you spend re-baiting a site, the better your chances of engaging a really big bear to use it.

And the longer it takes a bear to work at getting bait, the more time they will be at the site. This will give you both more trail cam pictures and angles to evaluate the size of bears. When you’re hunting at the site, the trickle hole will give you more time to watch the bears and wait for the optimal shot angle.

Lastly, the trickle barrel will also help you maintain a cleaner bait site. Here in Alaska, hunters are required to remove all bait (including bait-contaminated soil) at the end of the season. At a trickle-bait site, bears typically eat the food piece by piece as they get it out, so it makes the cleanup much easier.