Three weeks after I carried a 50-gallon steel drum half a mile through dense cedars and over moss-covered logs the... 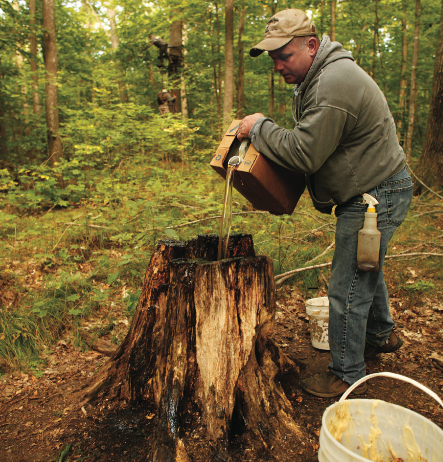 Three weeks after I carried a 50-gallon steel drum half a mile through dense cedars and over moss-covered logs the size of Volks­wagens, the first bruin of the spring season finally showed up on my trail cam. Two months later, the Idaho spring season ended and I had yet to see that bear again.

Fast-forward eight years and as many bears later. My friend Lance Jones was sitting at that same bait site with nothing but a longbow in his hands. A bear walked slowly toward a barrel filled with sweets less than 10 yards from the base of his stand tree.

This story ends with a punched tag and a happy hunter, but it took years to learn how to bring in bears consistently. Learning baiting skills was even tougher because my home state of Montana doesn’t offer a bear-baiting season. Here’s how you can straighten the learning curve and get in on the action quickly, even if you’re travelling out of state to hunt bears over bait.

LOCATION
During spring hunting seasons, bears are hungry after hibernation, and in the fall they are getting ready to den up for winter. Knowing where bears naturally want to be at either time of year will pay off, and the closer you can get, the better. Local biologists and game wardens should be primary information sources, but there’s more to it than making a few calls.

Good bait sites are located where the sun will heat the bait so the scent carries over long distances, and you must to be able to get in and out of the bait site undetected. Timbered ridgetops over valleys are good spots for dispersing scent. However, if your bait site isn’t near a consistent water source, there’s no way it’s going to produce bears. Any creek or lake will do, and the closer it is to your site, the better.

GEAR
Get a metal barrel and cut a hole big enough for the bear to get a paw inside, but small enough to keep birds like ravens out. Prime baits include used fryer grease, doughnuts, and fresh scraps from the butcher, though popcorn, bread, and sugar will also do the trick.

Don’t underestimate a bear’s hearing, especially at close range—treestands, ground blinds, and the sleeves of your shirt must be silent. Trail cameras aren’t necessary, but they can help you decide where and when to hunt if you have multiple baits.

SETTING UP
When it’s a do-it-­yourself hunt, you need to pay attention to details. First, be certain to abide by regulations. Then you can move on to particulars such as wind direction, topography, and tactics. Tricks like pouring grease on the ground in front of the barrel will cause bears that come in to make scent trails as they leave the site. The grease-soaked ground will also keep bears hanging around.

If possible, wait until bears are consistently visiting the site before setting up a treestand. Conditioning bears to your bait site ensures that they will come walking in like they own the place.