How to Piss Off A Summer Muskie into Striking

When a summertime muskie follows but refuses to bite, try infuriating him 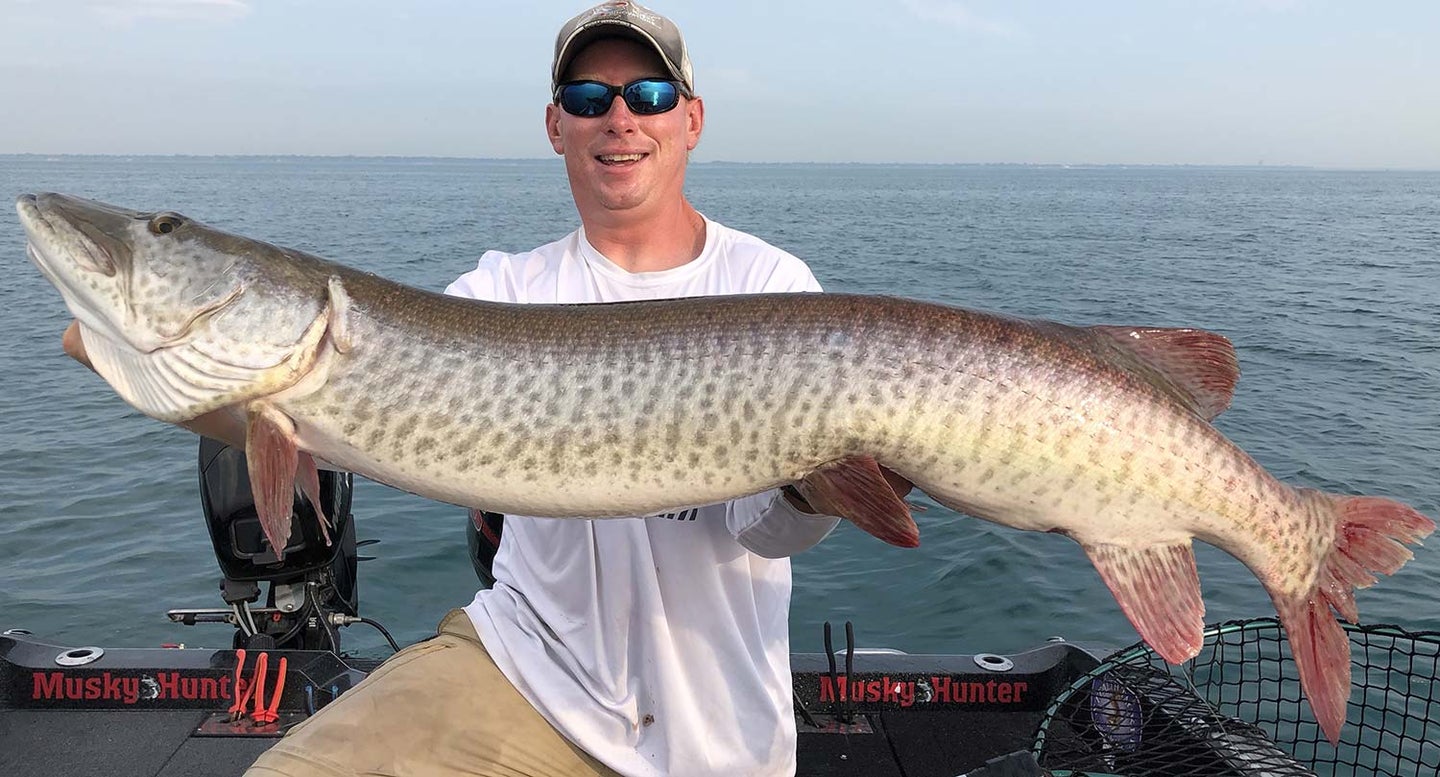 Two things were obvious: the muskie following my lure was a giant, and it was coming in hot—its focus completely on my bucktail spinner. I swung the bait into a wide turn at boatside and then hung it on the outside curve to create an easy target. The fish shortcut the corner and T-boned the lure going away. Its strike was so fast and vicious I didn’t need to set the hook, but instinct took over.

Minutes later, after photos were taken and I had watched the released muskie make its way back into the depths, I shook hands with my fishing partner and stopped to savor the moment.

“They should all be so easy,” he said. His words carried truth.

Muskies have the confounding habit of following anglers’ lures to the boat and not biting. We question our friends for answers and scrutinize our tactics, yet continue to lose sleep over giant muskies that were so close we could almost touch them — yet couldn’t. Ultimately we have to accept the fact that muskies make their own rules, and what works for on one fish usually won’t work for the next. But have faith.

With many hours on the water and even more time spent thinking about their sport, some of the top anglers in the country have devised ways to get muskies to bite. Following are seven ways to trigger a strike.

Regardless of the lure, a plain-vanilla retrieve usually leads to muskie follows, whereas changes in speed and/or direction can initiate a direct attack. Think of it as if you were playing keep-away with your dog—the more sudden your movements, the more Fido wants it. Crank your reel handle quickly to give a bucktail or topwater a burst of speed, or swing your rod tip to the side to change the lure’s direction—a mid-retrieve twitch or two with a crankbait can be deadly. Varying the cadence and rod sweep when working jerkbaits or soft plastics can be something the muskies don’t expect, possibly promoting a reaction strike.

Well-known Minnesota guide Ryan McMahon likes imparting a quick upward movement toward the surface with his lure, regardless of its style.

“I find that speed and directional changes in your retrieve are huge triggers to get fish to bite,” says McMahon. “I think muskies oftentimes push their prey toward the surface. When they see your bait do this, it seems natural and makes them feel like they’re hunting for real.”

There is perhaps no fishing maneuver more mimicked than the figure-eight retrieve is for muskies. In fact, many muskie anglers practice it at the conclusion of every cast regardless of whether they have a follow or not. Practice builds muscle memory, so you don’t choke when a big fish shows up. Many times unseen muskies will come from nowhere to eat at your feet. No figure-eight, no muskie.

Guide Bill Sandy and his wife Cindy own Blackhawk Island Camp on Lake of the Woods’ Northwest Angle. Bill has been called the “muskie whisperer” for his ability to trigger muskies that seemingly had nothing better to do than follow his lure with no intention of biting—yet all of a sudden, they do. Other expert fishermen have called Sandy the best bucktail fisherman they’ve ever seen. Sandy devised what he calls the “hang move,” which works with any type of muskie lure, but is especially effective with bucktails. It involves a slowing of the lure in the outside turns of a figure-eight to help provide an easier target.

“On every cast, I imagine that I have a fish behind my bait so that I don’t get caught off-guard,” says Sandy. “The key to catching muskies in a figure-eight is to get the fish to react to what you’re doing, but you have to let them eat the bait. They’ve got to do it themselves. So many fishermen get excited and pull it away from the fish.

Ashland, Wisconsin, guide Kevin Schmidt is becoming known as a minnowbait master. Minnowbaits have diving lips, so they’re essentially crankbaits, but have flat sides that give off lots of flash, so they often produce follows from neutral-minded fish. Schmidt doesn’t perform a typical figure-eight with minnowbaits, but rather moves his bait perpendicular to the muskie to provide as great a lure profile as possible.

“When a fish is following behind a bait it doesn’t see a lot except the narrow back end of the bait, but when you turn it sideways to them it looks totally different,” says Schmidt. “It makes the bait an easier target, it looks bigger to them, and they can see it better. Given the choice, they usually want to grab something sideways in their mouth so they can kill it.

“The problem with doing a conventional figure-eight is if the fish doesn’t follow into the eight you’re pulling the bait away from the fish. With the perpendicular move, you can move the bait back toward the fish, and when they start to get interested, you can tease them by taking it away from them. Pretty soon they get aggressive and want to bite.”

Schmidt prefers minnowbaits smaller than nine inches because larger lures are harder to turn around. “A seven- to nine-inch Slammer or the regular-sized ShallowRaider are fine, and a diver jerkbait like a 10-inch weighted Suick can be really good,” he continued. “With the weight, the lure rises slowly, keeping it below the surface for longer and giving them more time to decide what they’re going to do.”

Read Next: How to Catch Muskies by Fishing Deeper Water

If a muskie follows your lure but turns around and leaves, pitching a different lure style can sometimes get it to bite. For example, if a fish comes to the boat behind a bucktail, pitch back a topwater or a minnowbait. A large soft plastic bait like a BullDawg or Medussa, or a swimbait like a Swimmin’ Dawg, can be very effective, too. Work the pitched lure very erratically at first to get the muskie’s attention.

If the first pitch cast doesn’t connect, move your boat off to the side and cast again, now with a dramatically different retrieve angle. If that doesn’t work, you should probably leave and plan to come back later under different conditions rather than overpressure the muskie.

If you want to catch a muskie that’s followed, returning to it later in the day can often get them to bite. Jim Saric, host of “The Musky Hunter” TV show, is currently filming its 14th season, and has a goal of catching at least four muskies on every episode. He knows he can’t catch every follower, so he’s become an expert at catching them later when they become active.

“The reason they call this muskie hunting is because catching a big muskie is often all about first locating the fish during the day, then returning at a later time when there is some sort of environmental change,” says Saric. “I use the term biometrics to characterize all of those external factors that make predators more or less active.

“Whenever I locate a big muskie, there are two times I make sure to return to try to catch it. The first is when there is a weather change, particularly when the sky switches from being sunny to cloudy. When the sky turns dark with an approaching storm, the biometrics are prime for making a big muskie more active and more apt to bite.”

If a muskie won’t bite during a weather change, Saric has an ace up his sleeve. “If a weather change doesn’t work, my number one approach is returning to that big muskie as the last stop of the night, after sunset. I call the time when you start to lose sight of your lure ‘first dark.’ A stealthy approach to the spot often produces a strike from that trophy muskie. The background in the photo of you with the muskie may look black, but your bright smile usually lights up the picture.”

Besides weather, another prime time to return to a follower is during a moon event, whether the moon is positioned overhead or moon underfoot (Solunar Majors) or moonrise or moonset (Solunar Minors). A weather change always trumps the moon, but while you cannot control the weather, you can plan for the moon because the times are exact. You can find moon times on a number of apps for your phone.

Spencer Berman is a Lake St. Clair charter captain who teamed with Matthew Quintano to win the Professional Musky Tournament Trail Championship in 2018. He is a serious devotee of moon guidance.

“There is no better time to catch a fish that you have previously seen than during a moon event,” says Berman. “These moon times, in addition to sunrise, sunset, and weather changes, are the best chance for stubborn muskies to bite. Always make sure to pay attention to these windows and use them to go back on your biggest follows of the day or trip.”

Read Next: The 7 Best Waters to Catch a Trophy Muskie

When you return to try to catch a muskie that was moving fast when it first followed, it’s wise to use a bait that is similar to the one it followed, but slightly different. If the muskie followed a bucktail, return to it with different blade and/or tail styles for a different flash and vibration, or a completely different color. If a muskie follows a propellered topwater, return with a walk-the-dog topwater of a similar size and color.

On the other hand, neutral-minded muskies often follow slowly. Northern Wisconsin guide Rob Manthei has two finesse baits he relies on when trying to catch such fish.

“Every angler would rather have all muskies strike, but for the most part, they follow or are uninterested,” says Mathei. “When I return to an area where we had a lazy follow, I have two baits that often trigger that fish to strike. I like a nine-inch weighted Suick or a 10-inch Red October Tube with the jerkbait harness. They move slowly and hang in a muskie’s strike zone to give it lots of time to decide to eat. Either of these two has produced fish for me when returning on lazy lookers.”

If all else fails, a muskie will occasionally act as if it has an internal clock. If it followed at high noon today and you exhaust all of the above methods trying to catch it, try returning to it again at noon tomorrow. Every other technique listed here may sound more scientific or more sexy, yet something as simple as setting your watch for your return trip can be the catalyst that puts the muskie in your hands for a photograph. In this scenario, use the same lure the fish followed earlier.

Muskies are arguably the most challenging fish to catch in freshwater. Whether it’s a trick maneuver during the retrieve or at boatside, or a matter of returning during a key weather or moon period, they can be caught. You just have to keep trying until you find what the muskie wants.