We don't know much about this hunter, except that he has nerves of steel 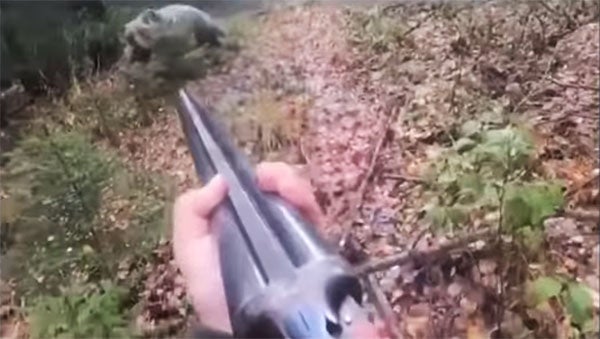 When a brown bear charges, it’s a terrifying, surreal experience. It seems impossible that a bear could be barreling toward you at full speed, low, fast, and moving like water over the ground. But that’s how it happens. Adrenaline pumps, your mind races, and it feels like time stands still. Only a few seconds stand between you and a bear that will break off its charge, or won’t. If you’re fortunate enough to have a gun at the ready, you’ll have to decide whether to shoot or hold your fire.

We don’t know much about the following video, which was shared as a reel on Facebook, but we do know that it shows what we assume to be a bird hunter in a northern boreal forest. It seems that the hunter is after birds—possibly grouse—because of his side-by-side shotgun and dog that can be heard barking in the background. As the video begins, the hunter is at the ready. Perhaps the hunter was alerted to the bear’s presence by his dog or dogs. In any case, the bear comes barreling into the trail, over a downed tree, to just under 10 yards (my best guess), then breaks off the charge. It immediately loops back around and charges again, following the same path.

This time the bear gets a little closer, perhaps five or six yards. When it breaks its charge, it drops only a few yards back into the trees and brush, paralleling the trail that the hunter is backpedaling down. It lunges from the trees a third time, this time to within 5 yards of the hunter, and quickly breaks off the charge again.

The hunter remained calm, and kept his shotgun trained on the charging bear. He never shot, but this was certainly a too-close-for-comfort experience. So, did the hunter make the right call?

It’s likely that he had only upland game loads in his shotgun. And of course, he only had two shots. Many praise the hunter’s restraint in not shooting, but if he had grouse loads, he didn’t have much of a choice. A 12 gauge is potent, but loaded with birdshot, one would have to wait until the last possible moment to have any hope of a meaningful impact on a charging grizzly bear.

READ NEXT: Charged by a Grizzly: A 10mm Glock (and Serious Practice) Saved My Life

It’s true that most grizzly and brown bear charges are bluffs, and some folks are unnecessarily terrified of bears to the point that a mere sighting sends them into a panic. Most often, you will not have to shoot when a brown bear charges. Most charges are the result of surprise or uncertainty about what the human is. Years back, a buddy and I were sitting behind a pile of spruce boughs when a sow and boar grizzly ended up on either side of us. I had my bow, he had a 12 gauge with slugs. With the boar behind us, we were waiting for a shot when the sow (who was in front) spotted us and instantly charged from 12 yards. We didn’t have to shoot, but her skid marks ended three feet in front of our makeshift blind. Often, grizzlies and brown bears will charge first and make up their mind on the way. I’ve also had a huge grizzly walk to within three feet of my rifle muzzle before spooking, but he was unaware of my presence.

Based on what we see in the video (with no additional context), I think the hunter did great. As I watched it several times, I came to the conclusion that if I wouldn’t have broken a shot on the final charge, my finger would be just about to break the trigger when the bear turned back into the woods. I’m sure that was likely the case. However, had it been the same situation, and I was armed with my .375 Ruger (or any other reasonable rifle), I’d have sent that bear to the big berry patch in the sky—likely on its second charge. It’s not uncommon for bears to bluff charge multiple times, but the speed and low-to-ground posture of the bear mean serious business. Unless the bear is changing posture to break the charge, under 10 yards, you better take your shot and hope you hit the bear hard enough to give you time for another.

If you have good visibility where you’re at, backpedaling or unnecessarily moving is a mistake. If the bear wants to come after you, you won’t simply walk away. Stand your ground (and avoid tripping over backwards). Learning to read bear body language and conducting yourself responsibly in bear country needs to be a priority, but your life is more important than a bear. This year was the first year I’ve had to shoot an aggressive bear (a large black bear at 12 feet), followed by a grizzly that was running toward the noise I made to spook her away. I probably didn’t have to shoot the latter, but being in-season (I had a grizzly tag), I didn’t feel like playing the guessing game when she broke under 15 yards. If you’re in bear country, you don’t have to be a jingle-belled goober, but humbly carry a rifle, shotgun with slugs, handgun, or spray, and be prepared to use it.