For better or for worse–he’s done it again. As many of you may recall, Outdoor Life was on the scene... 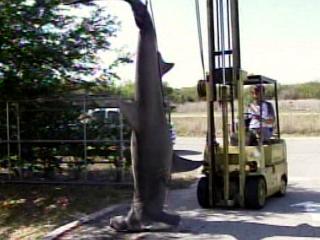 For better or for worse–he’s done it again.

As many of you may recall, Outdoor Life was on the scene back in 2006 when Florida angler Bucky Dennis shattered the world record for hammerhead sharks at 1,282 pounds. Dennis, who donated the brute to the Shark Center at Mote Marine, endured some criticism for taking the big female hammerhead which was pregnant with 55 pups.

Dennis’ latest catch weighed in at 1,060 pounds. It, too, was caught in Florida’s famed Boc Grande Pass. He fought the hammerhead for 2 1/2 hours and is expected to submit the catch to the IGFA as a line-class record.

Here’s a look back at former Fishing Editor Jerry Gibbs’ tale of the world record hammerhead of 2006.

Once they’re hooked, giant hammerheads know where to go. The nightmare monster that ate a live and bleeding 20-lb. stingray bait Capt. Clyde “Bucky” Dennis served up followed the script flawlessly. It was 11:30 am, May 23 at Boca Grande pass, Florida, and an instant after it bit the shark left the pack of tarpon boats where it had lurked trying for an easy grab of hooked ‘poon, and roared for deeper water. Five-plus hours later and 12 miles out into the Gulf of Mexico, his back and legs battered and hurting, Bucky had the fish alongside. Fairly beaten, gaffed twice, the fish was tail and head lassoed for its final ride. If everything checks out this shark will have shattered the 24-year-old IGFA great hammerhead record of 991 pounds. Bucky’s monster tipped a state-certified truck weigh station scale at 1,280 pounds.

The 36-year-old, Port Charlotte angler was alone in his low-slung 23-ft. flats skiff when the shark ate. The hammerhead had first lunged at a hooked tarpon pal Kenny Hyatt was fighting close by. Kenny ran his boat in a high-rev doughnut over the beast trying to scare it. Such creatures don’t frighten easily. This one moved slightly, saw the stingray, and chomped. Bucky was in trouble now, trying to steer and keep the rod from touching anything which would have queered his record shot. But then another friend, Brian Hart, jumped into the angler’s skiff. Bucky took the bow fighting chair and they followed the running fish.

Hart stayed with Bucky past Boca Grande’s second bell buoy. There the angler’s “crew” of other pals piled aboard. Of those men it was Larry “Mack” McLean who drove in the first gaff hook after five hours of battle. The flying gaff pierced the hugely muscled dorsal and held. Imagine the deltoids of a thousand pound NFL linebacker and you understand about a solid hold.

“After that first gaff she went ballistic,” Bucky says. “That huge tail was really going. She sounded again. We’d tried ten times to get the leader and get that first gaff in, but now it was. She wore down in thirty more minutes and we got a second hook in just behind the right gill slits. Then we got the tail rope on; once you’ve got that-or a head rope-you’ve got them locked. Unless you’ve got a small boat and the shark pulls you under.”

That almost happened. Bucky and his pals tried sliding the shark across the aft skiff deck to avoid towing the beast in. The boat’s entire stern quarter began sinking as the enormous girth of the creature was exposed. With four men pulling, it was impossible to raise the shark further than half way. It took nearly three hours to tow back to Gasparilla Marina.

The shark was loaded onto a boat trailer. The following day Bucky donated it to the Center for Shark Research at Mote Marine Laboratory in Sarasota. Weighed on their scales it had lost 18 pounds.

“I hope for the record but even so I know somebody will catch a bigger one eventually,” Bucky said. “They’re there. There are three big hammerheads there — a couple light gray and one black one– all pushing seventeen-eighteen feet. Mine was just over fourteen. Two weeks ago we had two gaff hooks in the black one and they pulled. It was longer and bigger around than mine. Yeah, I’ll be ready to get back on the water pretty soon.”