Keith Dees and his son were chasing bass and redfish on Thanksgiving Day when the toothy, 162-pound behemoth struck 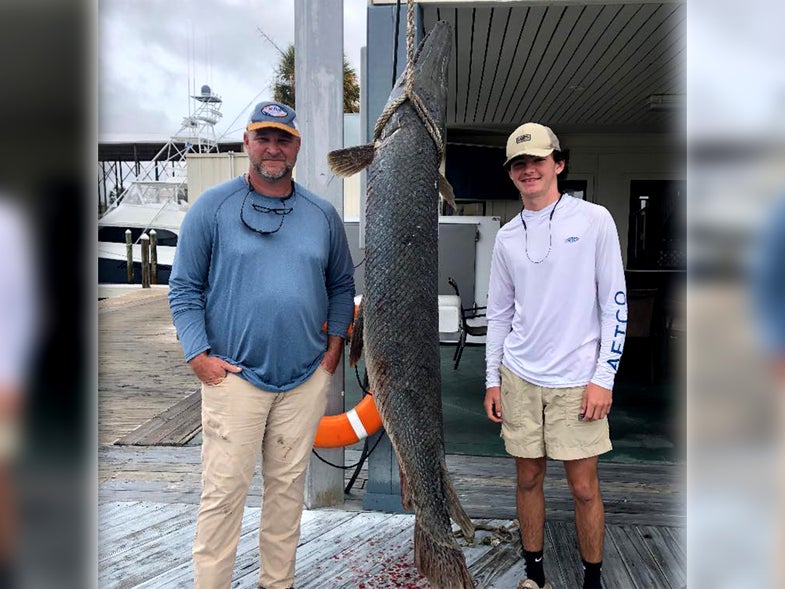 The Alabama Department of Conservation and Natural Resources certified a massive alligator gar as a new state record last week. The huge gar was caught on Thanksgiving Day by Alabama angler Keith Dees, who was fishing with his 15-year-old son, Huntley, as part of their annual holiday outing on the water.

The bite was good that morning, and the two anglers had boated nearly 20 fish—a mixture of largemouth bass and redfish—in the Raft River, which is part of the larger Mobile-Tensaw River Delta. Suddenly, Keith hooked into something heavier. The fish slammed his Jack Hammer chatterbait, but it took him and his son half an hour to figure out what was on the other end of his line.

“I thought another big redfish hit,” Keith said in an interview with The Call News. “I was reeling as fast as I could. As it went by, I could see something big underwater, but [I] had no idea how big. We just followed the fish with the boat because I wanted my $20 lure back.”

Keith was using a medium-action baitcaster setup lined with 15-pound test, which is perfect for largemouths and reds, but not quite heavy enough for a giant gator gar. He patiently worked the fish and they followed it with the trolling motor as it made one run after another.

“For 30 minutes we didn’t know what we had,” Keith continued. “The fish took line, but never left about a 200-yard circle. Finally, it came up to the surface to gulp air. We went nuts when we saw the size of the fish. But we still had no idea how big it really was.”

Two hours into the fight, Keith and Huntley noticed the gar was tiring. But they didn’t have a net big enough to handle the fish, so they took a stiff plug-casting rod and a wide gap hook and fashioned a makeshift gaff.

“With the fish swimming alongside the boat, Huntley takes my $500 custom rod, and hooks the fish,” Keith explained. “I figured the rod would break, but the fish flopped sideways and then before going down hovered at the surface.”

That gave the two anglers just enough time to quickly get a rope around the gar’s tail so they could roll it into their bass boat. They called an Alabama game warden to learn if it was legal to keep the fish. The warden told them it was, but now they had to decide what to do with it.

“Where can someone put a 7-foot-long fish?” Keith asked. “We brought it home and put it in an old swimming pool to keep it alive.”

Realizing that the gar was a potential state record, Keith and his son drove with the fish to a certified scale at Orange Beach Marina, where it weighed 162 pounds. Then they brought the fish and the state-record paperwork to fisheries biologist Tommy Purcell, who confirmed the species. The state-record gator gar measured 84.5 inches long with a 35.5-inch girth.

The fish replaces the current Alabama state record of 151 pounds, 9 ounces. That record was actually a tie between two gar that were caught from the Tensaw River in 2004 and 2009. The current IGFA all-tackle world record for the species is a 279-pound monster that was caught from the Rio Grande in Texas by angler Bill Valver in 1951.

“I think anything that draws attention to the Delta is a positive,” Keith told the state agency after his record was certified. “The Delta is an extremely special place. My son has won a [Bassmaster] junior world championship, state championships, angler of year, and it’s made him an extremely versatile angler from growing up on the Delta. It’s just a neat, neat place.”