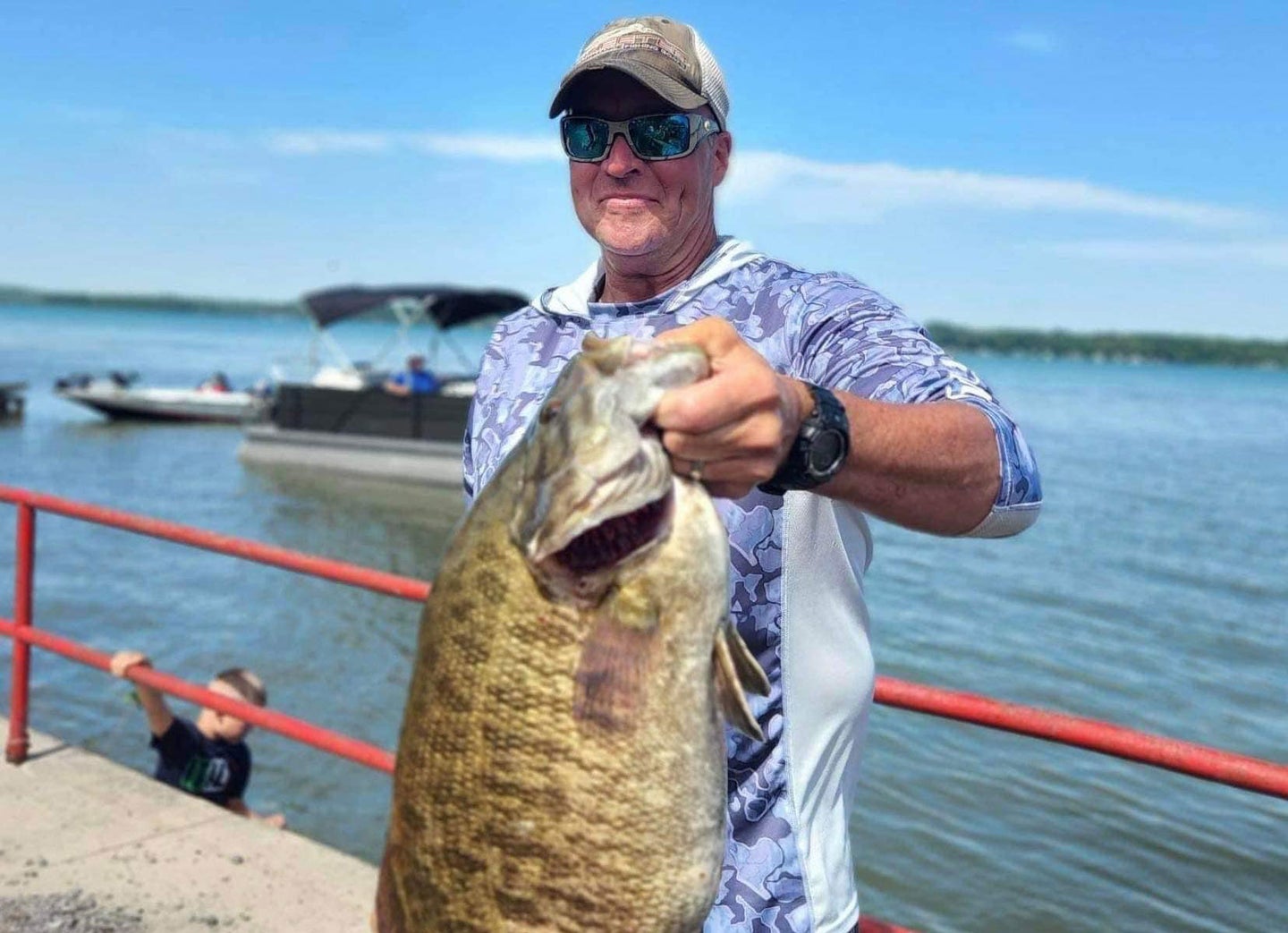 Angler Tom Russell and his fishing partner Eric Sullivan have worked together in team bass tournaments for over 20 years. And the morning of June 15 they were on a tear, boating huge smallmouth bass from Cayuga Lake, one of New York’s famed “Finger Lakes” located just north of Ithaca. They ended up landing a fish that could be a new smallmouth bass state record.

“It was a one-day tournament fishing out of Cayuga Lake State Park, and we hit the water at 7 a.m.,” Russell, 54, tells Outdoor Life. “We started catching heavy smallmouths right away, working drop-shot rigs in 8 to 10 feet of water.”

By 11 a.m. the pair of anglers already had four huge smallmouths over five pounds in their live well.

“I pitched out my drop-shot rigged with a white Berkley ‘PowerBait MaxScent Flatnose Minnow’ to 10 feet and got a strike. I set the hook, and I knew it was a big fish right away,” says Russell. “The bass made a couple epic jumps. I got it close using 20-pound braided line on a spinning reel, and Eric netted it.

“We were stunned. It was the biggest smallmouth either of us had ever seen, and we thought it might approach the state record.”

But it was only 11 a.m., and the tourney ran until 3 p.m. So, the anglers continued fishing, hoping to upgrade their five-bass tournament limit.

They caught more fish, but none bigger than the ones already in the live well. And that last big fish caught by Russell to anchor their five-bass limit in the tournament turned out to be a true giant—as they suspected.

Russell’s fish weighed 8 pounds, 5.8-ounces, which gave the team a total weight of 30 pounds, 15 ounces to win the event. They pocketed $1,850 to claim the Finger Lakes Open and beat 40 other boat teams.

It’s the third consecutive year Russell and Sullivan have won the event, and each year they anchored their catch with a smallmouth of about 7 pounds. But the 8-pound, 5.8-ounce fish is a cut above the others they’ve caught.

The current New York smallmouth record is 8 pounds, 4 ounces. That record is shared by two anglers: Andrew Kartesz, who caught his smallie in Lake Erie in 1995, and Patrick Hildenbrand, who caught the same size fish in 2016.

Outdoor Life contacted a state official for this story, and he reported that the scales Russell used to weigh his bass were not state certified. However, the digital scale looks extremely accurate in a video of the weigh-in at the end of the tournament.

The state is researching the scales and the catch to learn if Russell’s giant of a smallmouth will officially top the Empire State record book for one of the most revered gamefish species in North America.

But Russell and Sullivan aren’t resting on their laurels. When Outdoor Life spoke with them, they were trailing their boat and getting ready for another tournament.

“This a great time of year in New York for giant smallmouths,” says Russell.