Anyone who makes a good living as an open-water fishing guide almost assuredly is a top angler. To prosper as... 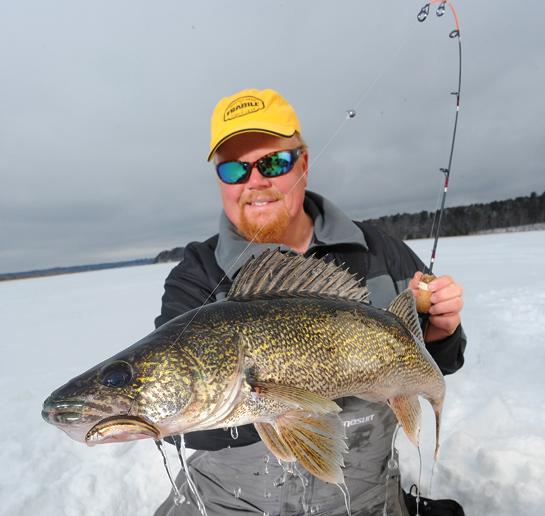 Anyone who makes a good living as an open-water fishing guide almost assuredly is a top angler. To prosper as an icefishing guide means he must be better than good. Meet Brian Brosdahl.

If ever there was a modern-day version of a Nordic king, it’s Brian “Bro” Brosdahl. Clients follow him onto the frozen lakes of his native northern Minnesota like squires tending to Arctic nobility.

Yet this larger-than-life, 45-year-old angler can work a lightweight ice-jigging rod with the kind of finesse that few can equal, consistently duping finicky-feeding walleyes, crappies, perch, and sunfish.

Brosdahl guides ice anglers on some of Minnesota’s biggest, clearest, and best waters, such as Cass, Leech, and Upper Red lakes, Lake Bemidji, Lake Winnibigoshish, and Big Sand. These are places loaded with panfish and walleyes. However, his ability to locate the best spots on these expansive bodies of water is what sets Brosdahl apart from the rest of the crowd. He certainly knows the how, but more important, he also knows the where.

Drill Bits
“Early ice is great because early-ice fish just slam lures and baits,” Brosdahl says. “They’re much more aggressive than they are in late winter.

“Shallow bays are the first to freeze on big lakes, and everything is hitting well then. Big bluegills are in the weeds, and crappies, plus lots of jumbo yellow perch and walleyes, all offer fast fishing–once you find them.

“I want healthy, green weeds, not dead or brown weeds,” he continues. “A good weed bed can be in just 6 or 8 feet of water, but 10 to 12 feet is more common on clear lakes with big bays. And sometimes good weeds are found as deep as 20 feet or more. Deeper weed beds with curves in the vegetation edges are especially good for bluegills and crappies.”

A dream early-icefishing spot, according to Brosdahl, is weeds on a big flat leading to deep water. Panfish are the target species in weeds, but a spot near deep water will bring bonus pike and walleyes, too. He most often works coontail or cabbage weeds (also called red top or musky weeds), but beds of short sand grass also are very good for panfish.

“Sand grass in a shallow bay out to about 14 feet of water is an awesome early-icefishing spot for all kinds of panfish,” he says. “A pillow or hump 2 feet up above the rest of a sand grass bed can be an incredible fishing spot.”

Dawn and dusk are best for catching shallow-water panfish. As the sun rises, deep weed beds offer the most consistent fishing. Brosdahl usually targets crappies and bluegills at dawn, and perch after the other species slow down.

“The lakes I fish have so many great weed beds that I could fish different ones every day and not test them all in a season,” he says. “That’s a primary reason I work very large shallow lakes in winter, and usually can catch fish through an entire day.”