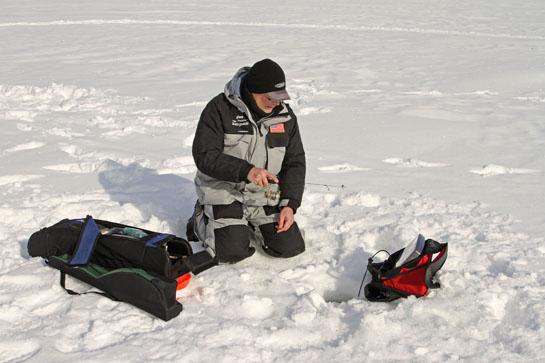 _”There’s your guy. Get right up on him and bump him.

Sounds like a defensive back coach pushing his cornerback on the bump-and-run technique, but I was actually tucked inside a heated shack on a frozen lake in Grand Rapids, Minn. And instead of glaring at opposing player, I was staring at the flasher sitting next to a hole drilled through 3 feet of ice.

I haven’t been “coached” that adamantly since my high school football days, but when your coach is the guy who led the U.S. Ice Fishing Team to a world title (2010), you want to pay attention.

Greg Wilczynski earned his nickname “The Prowler” because he’s known for roaming the ice to locate fish. But once he finds the sweet spot, he maximizes every bite with a meticulous coordination between his flasher screen and the spring bobber device he designed for St. Croix Rods’ ice fishing lineup. Clipped to the rod tip, the light wire coil terminates with a colored bead at the end of a wire arm.

Again, very much like a DB getting in a receiver’s face and then running with him, Wilczynski showed me how to watch my jig fall, ease it right up to a suspended fish, give him a nudge and then steadily raise the bait as the fish followed.

Once the chase was on, Wilczynski moves his eyes from the flasher to the spring bobber.

When the spring moves, set the hook.

Later, I’d double up on the fish monitoring with a flasher on one hole and an Aqua- Vu camera on the adjacent hole. It was pretty cool spotting fish on either screen, but in real-time or sonar reflection, the bump-and-run principal still worked.

I’m from Florida – not exactly a hotbed of ice fishing. This was my first day on the ice and after Wilczynski’s coaching session, I was whacking crappie, bluegill, and yellow perch like nobody’s business.

A good coach can make any player look good – even those from out-of-state.