Jade retrieving to hand after a 350 meter scent trail and retrieve. Photo courtesy of Blue Moon Wachtelhunds. When it... 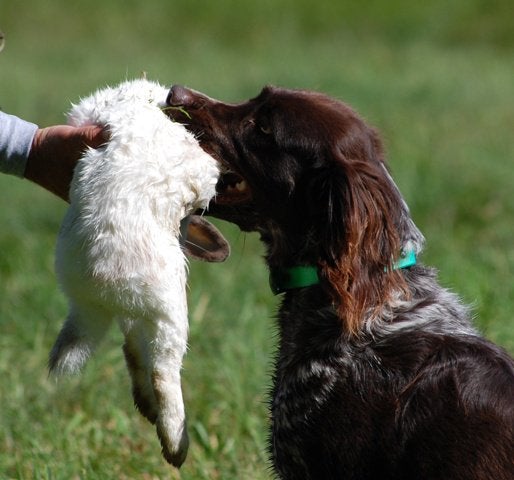 When it comes to establishing and maintaining a new breed of dog — and to do it well — it takes strict policies on breeding practices and how that dog will be used. With a few hounds and the cur breeds being the exception, most of the breeds in the U.S. originated in other countries. Perhaps the most influential of those countries is Germany.

Just a glimpse of the (at least) 46 breeds that were developed in Germany gives you an idea of how important the country is to dogdom, not to mention modern society. Among those breeds are some of the most popular and/or influential in the hunting realm: German wirehaired pointer, German shorthaired pointer, poodle, pudelpointer, small and large Munsterlander, Weimaraner and Dachshund. Not to mention working dogs such as the German shepherd, Doberman and Rottweiler, or popular companion dogs such as the Great Dane, boxer, Miniature Schnauzer, American Eskimo dog, and Pomeranian.

Germany keeps strict records and allowances of who can use, own and breed certain dogs. That strict adherence to a program and standards has kept dogs true to form. And when form follows function, dogs maintain healthy working conformation and intelligence.

A perfect example of this is the Deutscher Wachtelhund, or German spaniel, which has only been owned by professional hunters, foresters and gamekeepers. They’re trying to keep that tradition alive here in the U.S. by allowing only hunting homes to own the spaniels.

But the American Kennel Club isn’t as discerning when it comes to form, function and breeding of dogs. The argument could be made that as a registry maintaining ancestry purity, that what the dog is used for is not part of its scope – although that would wholly ignore the effects the conformation ring has had on working dogs in particular. At any rate, it wouldn’t surprise me to see a split take place with this breed – one where the breed is registered with the AKC under German spaniel, and others with more strict breeding and homing requirements registered with the Federation Cynologique Internationale under the Wachtelhund name.

The only other country I think that can lay claim to the title of most influential/important dog-producing country would be England, with its bevy of breeds ranging from terriers and pointers to spaniels and mastiffs.