Gun dog owners know that flea and tick season starts up in early spring, and by July both populations are... 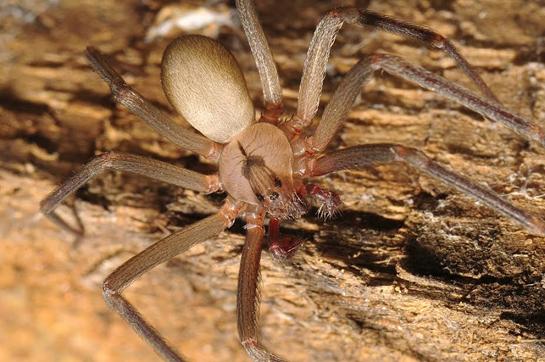 Gun dog owners know that flea and tick season starts up in early spring, and by July both populations are in full swing. A preventative measure, such as a flea/tick collar or topical applicant, is a must. This year however, it seems higher-than-average rainfall in parts of the country has contributed to a booming brown recluse population.

The brown recluse, AKA: fiddleback (named for the violin-shaped mark on its back), is a small spider with a potent bite. There are all sorts of stories and photos on the web about the toxicity of the bite, but in reality it’s a very small percentage that are ever that bad. Brown recluse are not an aggressive species and usually only bite when cornered.

That said, I’ll step on any spider I find. I’m good with snakes, but spiders make me scream like a teenage girl at a boy band concert. I take no shame in admitting that (not much anyway). I really don’t want to take the chance that the fangs do penetrate my skin – because the bite can definitely be bad under certain circumstances (kidneys shutting down, toxicity to the skin, etc.). Pets — dogs especially — are at risk for brown recluse bites, and in those areas of the country experiencing a population boom akin to the oil fields of North Dakota, take heed of the signs of a bite in your dog and treatment options.

From the South Illinoisan:

“Pet owners in particular should be on the lookout for the spiders. There is nothing preventative, such as flea and tick medicines, to ward off brown recluse spiders for animals, said Hailey Hicks, a technician with Stone Creek Veterinary Clinic of Makanda.

She said pet owners should check their pets regularly for bite areas.

‘You will see it more in dogs,’ Hicks said.

A dog’s behavior will change also if infected with a brown recluse spider venom. They become more lethargic and, in direct response to the pain level, quit eating, Hicks said.”