Actually, the very shiny gun here is an AKS-74U, from what I can tell–though slightly modified from the original design... 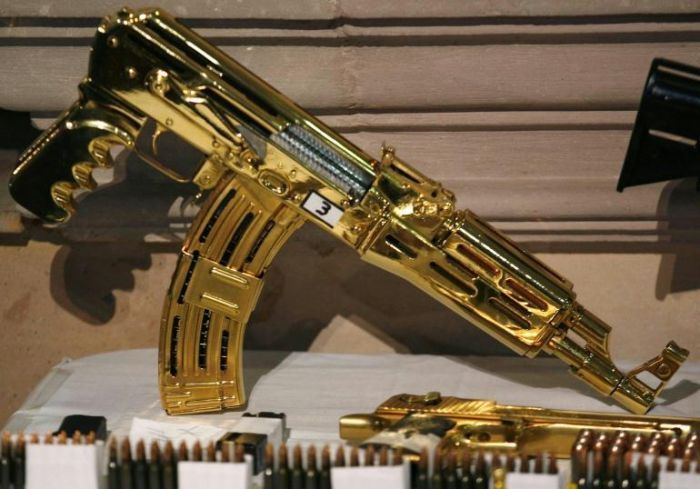 Actually, the very shiny gun here is an AKS-74U, from what I can tell–though slightly modified from the original design that was supposed to propel the people’s revolution to global victory during the Cold War.

My favorite touch is the jewelling on the bolt carrier. It’s as if whatever poor gunsmith was tasked with creating this monstrosity were actually interested in trying to make something beautiful for Tony Montana Jr., or whoever it was who commissioned the work.

I have to say I’m a little disappointed with the plain looking collapsible butt-stock on the shorty M4 in the picture below. Looks like our crimelord was cutting corners.

He should have at least done some insets of turquoise and silver if he couldn’t afford more gold. Though looking at the piles of cash this guy had on hand I don’t think that was a problem. His piggy bank is better stocked than a Congressman’s freezer.

But did he suffer from a lack of imagination? How about a gold-plated RPG? Or a bejeweled M1-A1 Abrams? What would you say is the final word in druglord armament?