The Colt Manufacturing Company has always had a strong following among the civilian population, but you can’t really blame these... 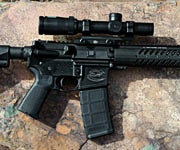 The Colt Manufacturing Company has always had a strong following among the civilian population, but you can’t really blame these fans for feeling neglected.

The focus of Colt, until just recently, was relentlessly on the military and law enforcement side of its business. At best, civilian shooters were an afterthought. And like jilted lovers, they’ve felt bitter about Colt’s seeming lack of care or concern–though to its credit the company is now trying to make amends.

It might be stretching the point to compare Colt’s new Competition Pro rifle to a bouquet of long-stemmed roses in its effort to woo a skeptical public, but it is a gun that is making plenty of shooters swoon.

Built for 3-Gun
The Colt Competition Pro is the brainchild of Dave Wilcox, who is heading up the company that is making these rifles for Colt. It’s built solely for the civilian market and is tricked out for the fast-paced and demanding sport of 3-Gun.

And the rifle’s specs hit a sweet spot for the sport. It has an 18-inch barrel with a 1:8 twist. This makes the rifle nimble and maneuverable, and the twist rate means it has no problem handling bullets from 50 to 77 grains, which pretty much covers the range of bullets used in the sport. It’s capped with a Surefire muzzle brake/suppressor adaptor that does a good job of keeping the muzzle on target, which is critical for achieving fast hits on the clock, and gives the shooter the option to run a suppressor.

An adjustable stock is handy for 3-Gun because of the contorted positions one has to shoot from, and the Magpul stock lets the shooter pick from six different lengths of pull. The charging handle from Badger Ordinance has an oversize “tactical” latch that’s easy to grab and manipulate in the heat of a stage when your gun has run dry.

Wilcox outfitted the rifle with the Geissele Super 3-Gun trigger. Its crisp 2.5-pound pull and short reset allow for fast and accurate shooting, though it does take some practice to master. If you’re not careful off the bench, for example, it’s easy to pull the trigger twice in quick succession while letting the gun free recoil.

Tune It Up
One of the coolest features on the rifle is the valve that lets the shooter adjust the amount of gas used to cycle the action. With too little gas, the action won’t cycle and eject rounds properly–obviously a bad thing. But with too much gas, the speed of the bolt-carrier unit is excessive and causes the gun to slap harder and jostle the sights around with each shot. By tuning the gun to your load, which takes only a couple of minutes at the range, the gun runs reliably but with a minimum of slap–great for maintaining a sight picture.

The long (15 inches) and narrow hand guard provides outstanding gun control and has a full-length Picatinny rail along the top for accessories. The upper and lower on my sample fit together snugly, and nothing on the rifle felt loose or sloppy.

Sub-MOA Accuracy
Colt guarantees the rifle to shoot sub-1-inch three-shot groups, and my rifle shot much better than that. With a high-magnification scope on the rifle for accuracy testing, and using the Outdoor Life five-shot group protocol, my average group size was .855 inches with Hornady’s 75- and 55-grain Steel Match ammo and Nosler 55-grain Varmaggedon ammo.

Once that was done, I swapped glass and put Bushnell’s new 1-6.5×24 Elite Tactical scope on the gun, which is an ideal power range for 3-Gun. The clever BTR-1 reticle on this first-focal-plane scope has holdover marks calibrated for the .223, and after zeroing the gun at 100 yards, I was quickly ringing steel plates out to 500 yards.

At $1,999, the Competition Pro is not cheap, but it is still an excellent value. The quality of the components, the smart design, and the performance it delivers are hard to top. This gesture of love and affection from Colt is just the thing the company needed to rekindle the romance with its fans.

Verdict
The Colt Competition Pro delivers a winning combination of features and performance for 3-Gun competition. It makes a strong statement in favor of Colt’s commitment to the civilian market.