The AirForce Texan is an accurate big bore hunting airgun 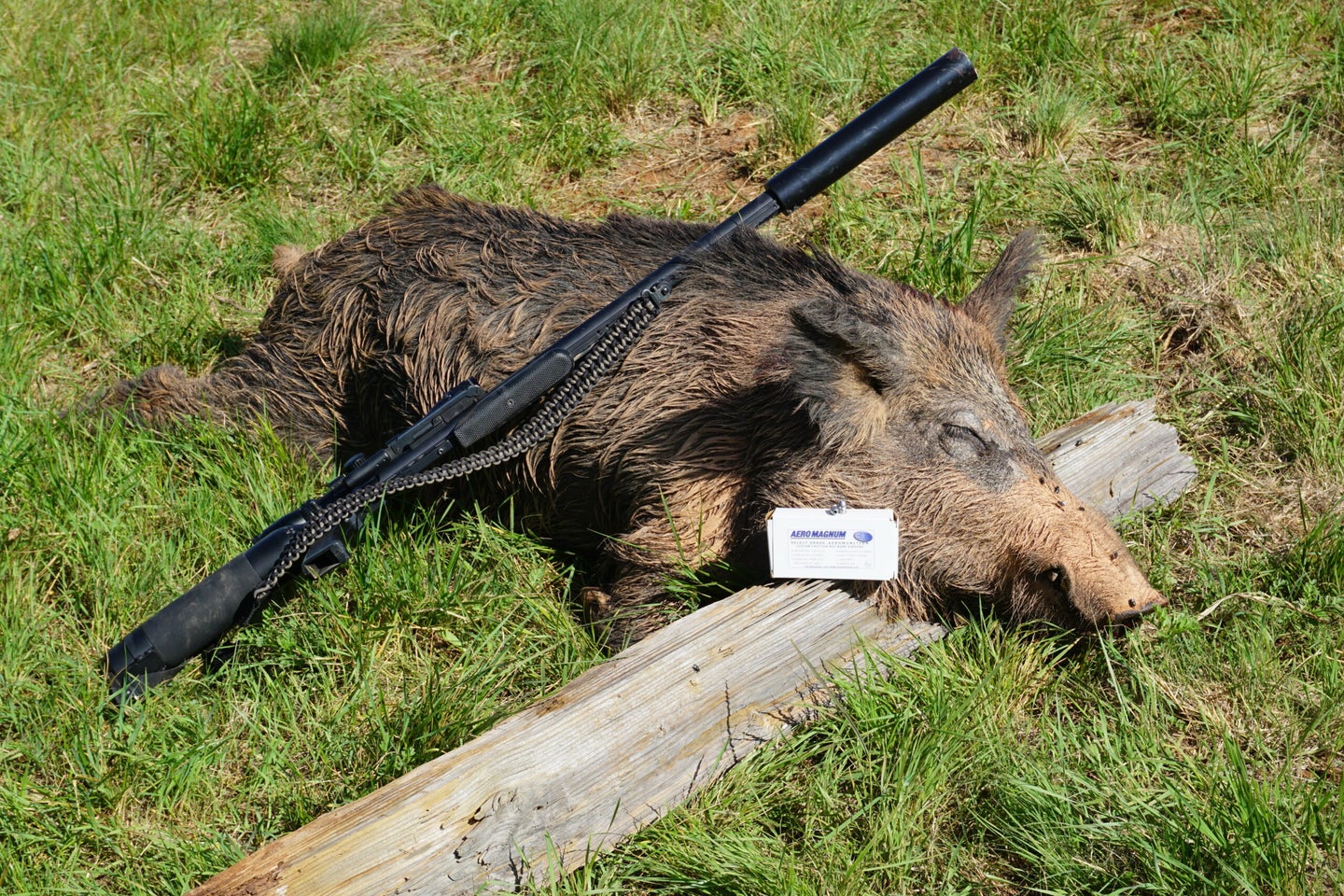 One of the first, and arguably the most influential, big bores air rifles was brought to market by one of the original American manufacturers of PCP air rifles, AirForce Airguns out of Fort Worth Texas. They developed a line of big bore rifles appropriately called the Airforce Texan, that on the surface resembled their standard caliber (.177-.25) models but was in fact loaded with new technology. In recent years, the Texan has become the most popular large caliber hunting air rifle on the market. Since the initial release, I have used Texans in different calibers and configurations to take deer, javalina, hogs, predators, and exotics such as aoudad, and can attest to their effectiveness and reliability.

The Airforce Texan utilizes its air bottle as a buttstock. The shoulder piece is clamped to the bottle, and the buttpad height and length of pull can be easily adjusted. The gun uses an AR type pistol grip, with integrated rails running from the receiver to the muzzle, atop and below the barrel. The scope rail forms a handle and adaptors are available that allow the use of either 11 millimeter dovetails or a Weaver style base for mounting optics. The forestock, sling swivel, and other accessories can be mounted. This rifle has a tactical look and feel to it, which I find familiar and comfortable to shoot.

The rifle cocks with a side lever mechanism, which is my favorite on an air rifle. AirForce did a great job designing their side lever and it functions with little effort, unlike most big bore air guns. The trigger is two stage, adjustable for position, and has a trigger weight of approximately 2 pounds out of the box. The safety is an inside-the-trigger guard configuration that is easy to release by pushing forward with the back of the trigger finger. All in all, the Texan provides an ergonomic control grouping that is well suited to a field gun.

The standard configuration uses a 490 cc steel tank that can be filled to 3000 psi. One very clever design element is that the valve is incorporated into the air-bottle and provides a very efficient flow of air from the reservoir into the breech, behind the projectile, and down the barrel. I am convinced after years of shooting the Texan and other AirForce air rifles with a similar setup, that you get more power and more shots at 3000 psi than with other designs due to this unimpeded airflow pathway. It is possible to adjust the Texan for optimal performance with different bullet weights.

What I think of as the “classic” configuration is the Texan with a steel tank in .457 caliber, 48 inch overall length with a 34 inch barrel, producing up to 650 fpe. It is available in .257, .308, .357, .457, and .50 calibers as well. Additionally, the Texan comes in both a rifle and a carbine version, and I have to say my personal preference is the carbine. With an overall length of 39” and a 24.75” barrel you give up some power, dropping from a max of 650 fpe to 500 fpe, but there are few air rifle hunting applications in which I feel this makes a significant difference. My preference for the carbine is due to its maneuverability, but if it’s maximum power you want, you have the option.

Speaking of power, there is another version of the rifle designated the Texan LSS CF, the CF referring to the use of a carbon fiber tank that can be filled to 250 BAR. Having higher fill pressures alone does not result in more energy, the gun must be designed to function at these higher pressures. The AirForce Texan airgun LSS CF incorporates a valve and hammer assembly that is designed to operate at higher air pressure and the .50 caliber version produces energy in the 800+ fpe range.

I brought out two of my Texans for a brief range session before a hunt last year, the .357 and the .457 caliber rifles. I have the .457 set up to shoot Hunter supply 405 gr flat point bullets, and for the .357 use the 128 grain Devastator bullets from Aero Magnum.

The .457 is consistently printing a five shot 1.7 inch groups at 60 yards, with the rifle set up to generate 800 fps and a calculated power output of 575 fpe. The rifle can be dialed up for more power, but I’ve found this setting produces the best accuracy and shot to shot consistency with my gun and bullet selection.

Switching over to the .357 I was able to generate five shot groups that were typically in the 1.2 inch range but did get a few inside of 1 inch. I was getting 10 good shots per fill, and the rifle was set up to generate about 960 fps yielding 262 fpe. After the 10th shot, the rifle was capable of providing a few more shots, but the POI shifted as the pressure dropped.

These guns are capable of generating more shots per fill, a higher degree of accuracy, or more power depending on the bullet chosen and the adjustable power settings selected. I have pushed the .457 to 600 fpe and have run the .357 up to 350 fpe. One of the great features of the Airforce Texan is that the shooter can adjust and fine tune the rifle to accommodate their individual requirements.

Where the Texans stands out

The Texan, regardless of the caliber option, will always be at or near the top of the power range when compared to competitive brands in the same caliber. In my experience using many configurations and calibers of the Texan over the years, the accuracy is consistently good. The cocking action is fast and smooth, and access to the single shot loading port is excellent. The trigger is light and breaks crisply, which facilitates accurate shooting. The Texan, especially the carbine version, carries well on a sling. I like the fact that accessories can be mounted on the abundant rails and have found the Airforce Texan to be very rugged and reliable.

The Airforce Texan is one of my favorite big bore hunting rifles; my personal guns are equipped with an aftermarket buttpad, a rubber wrap on the pistol grip, swivel studs mounted on the rails, and the power adjustment optimized for the specific ammo I use. An advantage for Texan shooters is that a large and supportive enthusiast community exists, and they are a repository of knowledge and expertise. There are also a number of talented tuners and a plethora of aftermarket parts available, making the Texan a great platform to customize. I also like the fact that this is a US made product and appreciate that it comes from the birthplace of modern big bore airgun hunting.

Things that could be improved

I have to confess that while I feel comfortable shooting the Texan now, it took me a while to reach that point. The bottle buttstock has a different feel to it. I tried adding aftermarket cheek pieces and pads, installed aftermarket stocks (and there are some excellent ones out there), but in the end found that with the right scope mounts and practice I acclimated quite well to the design.

In some shooters’ view, the fact that the Airforce Texan is a single shot is a limitation. But when shooting a big bore this is not a problem in my view, as these hunts are usually over with a single shot. As mentioned, the accessible loading port permits a rapid reload when needed.

Final thoughts on the Texan

While there are a few long-range big bore airgun target competitions being held, my opinion is that big bore airguns are made for hunting, and I find the Airforce Texan perfectly suited for this application. It has the power and accuracy to take any big game in North America, it is an easy gun to carry in the field, it is very rugged and reliable, and shoots well off hand or off sticks.

Big bore airguns can be quite expensive, and while the AirForce Texan while not inexpensive, it is offered at an attractive price point. This is especially true when you consider what you’re getting and when viewed in the context of the high price tags on many of the other guns in the category.

And finally, I always give high marks to a rifle that functions well out of the box but has the adjustability and availability of custom parts that allow it to be tailored to an individuals need. We hunt with these big bore air rifles for the challenge and enjoyment of doing things differently, and in my view any of the AirForce Texans is one of the best air rifle choices that will meet the needs of hunters from big bore newbies to the seasoned airgunner. You can check out the Texan by clicking here.