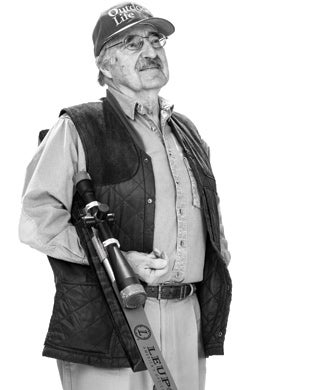 Former OL Shooting Editor Jim Carmichel shot the world-record group in ****Light Varmint Benchrest. Current Shooting Editor John B. Snow sits down with Carmichel to get his take on rifle cleaning, pet loads, breaking in barrels, and more.
**
Q: What is your pet load?**
A: I’m often asked this but the fact is that I’ve never had a “pet” load. Like most bench shooters I’m likely to change my powder charge or even the powder itself during the course of a tournament, depending on such variables as temperature and other atmospheric conditions. I experiment with different powders and may switch between two or three while prepping for a tournament. A shooter who thinks he has discovered his ultimate “pet” load is only fooling himself because there isn’t any such thing. But in case you really want to know, it’s no secrete that the day I set the new record I was using about 29.5 grains of Vihtavouri 133 powder behind a 68 grain Hottenstein bullet, Federal 205 Gold Medal primers and cases I had modified from Lapua .220 Russian brass.

Q: How long does a benchrest barrel last?
A: I think most bench shooters will agree that a good rule of thumb for the accuracy life of a quality barrel is about a thousand rounds. I’ve had some that lasted longer and a few that petered out after only a few hundred. Careless and improper cleaning can be certain death to a good barrel. The first hint that a previously accurate barrel is losing its edge is when it begins alternating good and bad groups and teasing you with the hopes that there is still some accuracy life left. That’s why I call them teasers and know it’s time to fit a new barrel.

Q: What barrel break-in procedure do you use?
A: Would you believe that I never bother with any of the popular shoot and clean break-in techniques. I just start fire-forming cases and shooting groups from the very first round so a new barrel may have 10 or more rounds through it before it get it’s first cleaning. I don’t doubt that commercial grade barrels may benefit from a proper break-in but I don’t see how high quality hand lapped barrels get in better by attempting to break them in.

Q: How often do you clean your rifle?
A: I clean after every relay during a benchrest match even if I’ve fired no more than seven or eight shots. Sometimes there is not much time between relays for loading so I follow a fixed cleaning routine using a certain numbers of patches and in and out strokes with a bronze brush. The whole job takes me about three minutes.

Q: What magnification scope do you prefer?
A: I currently use 45X scopes on all my bench rifles, but I’m open to using even higher magnifications.

Q: How much ammo do you take to a tournament?
A: Actually I don’t take any loaded ammo at all and I’ve known only a handful of bench shooters to bring pre-loaded ammo to a match. I bring only fifteen to twenty brass cases for each rifle and continue reloading these same cases throughout the tournament.

Q: How long do your brass cases last?
A: I expect 20 properly prepped cases to last the life of the barrel, which, on average, means each case will be reloaded upwards of 50 times or even more. Which amazes reloaders who claim their cases fail after about ten or fewer reloadings. But remember, my rifles have minimum dimension chambers so there is minimal case expansion and very little working of the brass during resizing. And before you even ask, I absolutely do not anneal my brass at any time.

Q: Do you use different loads for 100, 200 and 300 yards?
A: That’s a good question and you’ll get different answers depending on who you ask. I do not change loads for different yardages because I think that a load that shoots well at 100 yards should be good at 200 and beyond. However, I see some logic in the proposition that increasing velocity for 200 and especially 300 yards might pay a dividend in reduced wind drift even if the hotter loads is somewhat less accurate at 100 yards. So it may be a tradeoff that pays off, but I don’t do it.

Q:Do you win much prize money in benchrest?
A: I have to laugh at this question because there is very little money to be won shooting benchrest. The exception being the annual Super Shoot, which offers generous prize money but I’ve never won more than a few hundred dollars even there.

Q: Do you participate in any other shooting sports?
A: I’ve tried just about every form of organized shooting competition you could name: shotgun and pistol as well as rifle. Recently I’ve been competing in Sporting Clays events for side by side shotguns only. It’s a fast growing sport and I have a lot of fun shooting the classic double barrel guns that I love. A couple years ago I won the .410 category at the Southern SXS Classic Double Gun tournament but haven’t won anything since.