Home Defense Ammo for Your AR 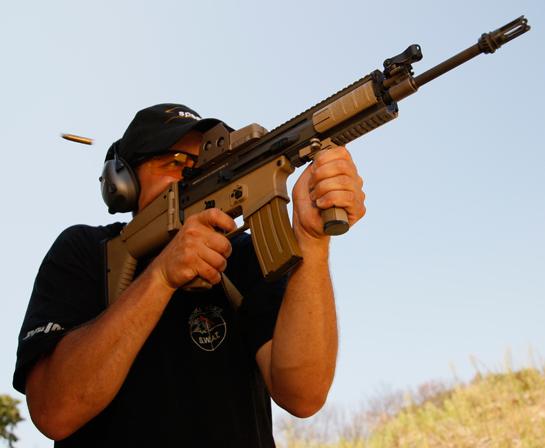 Pick a task the .223 is capable of, and there is a load designed for it.

Home defense is an increasingly popular use of the .223, especially in the easy-to-shoot AR-15 modern sporting rifle platform.

The particular requirements in that role are simple: Deliver a massive blow to incapacitate an attacker, while minimizing the risk of overpenetration that might endanger family members or neighbors.

The easiest way to find the right load from the many offered is to select a load with a bullet weight between 50 and 55 grains that features a polymer tip. These include the Winchester Ballistic Silvertip in 50 or 55 grains, the 50-grain Remington Premier AccuTip-V, and the Federal V-Shok 55-grain Nosler Ballistic Tip. Or, an exception to the 50- to 55-grain rule, the 60-grain Hornady TAP.

Each of these loads has a muzzle velocity (from a 16-inch barrel) of 2,800 to 3,000 fps, and produces muzzle energies between 1,200 to 1,300 foot-pounds. The velocity is well above the 2,000 fps threshold the U.S. Army has determined will produce hydrostatic shock that will damage tissue beyond that which the bullet actually contacts.

When fired into properly prepared ballistic gelatin, they penetrate 6 to 9 inches; exhibit rapid and explosive fragmentation; create a massive temporary stretch cavity; and seldom leave a piece of the bullet weighing more than 25 to 30 grains.

In comparison, the popular 9mm, .40 S&W, .357 Magnum, and .45 ACP handgun loads will penetrate 11 to 15 inches of ballistic gelatin and retain at least 75 percent of their initial weight. They produce muzzle energies between 345 and 575 foot-pounds, and are well below the velocity threshold for significant hydrostatic shock. Even the 240-grain .44 Magnum reaches only 800 foot-pounds of energy.

The right .223 load will deliver a bigger punch than any handgun load, and with less chance of over–penetration. And in an AR-type modern sporting rifle, it is easy to use and shoot. Just look for the polymer tip.